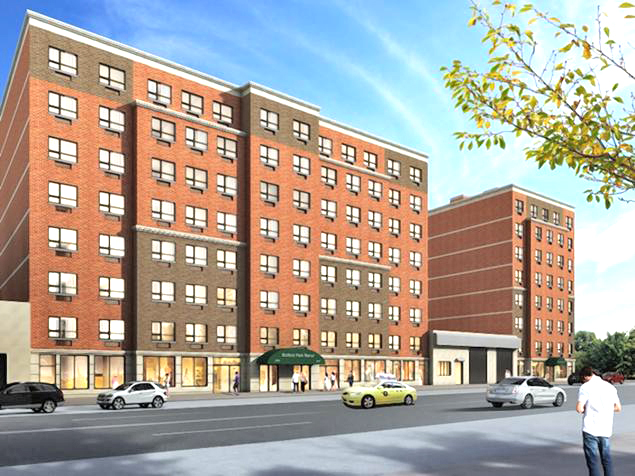 Is Bronx the next Brooklyn?

If you’re standing in front of Grand Central Station, the Bronx can easily seem like a world away.

The streets where Robert De Niro and Chazz Palminteri battled for Calogero’s soul bare very little resemblance to the avenues under the MetLife Building.

But the need for reasonably priced housing has already moved the needle in Brooklyn. What was once considered to be a territory on the outside looking in — a place to settle until you could afford the dream home on Park Avenue — the borough to the south is now far from a compromise, and the prices reflect that.

So as New Yorkers look for the next untapped resource, the real estate industry is taking the opportunity to buy low in the Bronx so that they can potentially sell high later.

“The transportation is already there,” said Jason Gold, vice president of Ariel Property Advisors, which recently sold three properties in the area, including 2381 Belmont Avenue for $1.8 million.

The principals of Nelson, along with its affiliates, have owned and/or managed more than 7,500 units of rental housing over the last 28 years with a large portion of the portfolio inhabiting the Bronx, including the 19-story Lafayette Boynton Apartments, which sits across from the recently renovated 205-acre Soundview Park.

“The Bronx has so many built-in characteristics from a transportation standpoint,” said Nelson. “It’s interesting that (interest in the area) hasn’t happened a lot sooner. Think about it in terms of public transportation and in terms of highways that intersect through the borough.

One such investor is Savanna, a company that agrees with Gold and Nelson’s assessments of the transportation in the borough.

Savanna sees Mott Haven and other areas of the South Bronx transforming into a broad mix of commercial and residential uses over the coming years — similar to Long Island City, Williamsburg, and DUMBO in earlier eras, managing director Tom Farrell told Brokers Weekly.

“The great mass transit options in this area allow easy connectivity to Manhattan and will continue to attract a wide range of groups looking for affordability in an exciting and growing community,” said Farrell.

“The neighborhood surrounding 2415 Third Avenue is changing and we are excited to be a part of that transformation,” said Christopher Schlank, managing partner of Savanna via a release. “Several new developments and amenities are coming to the area, and as a result, are enhancing its attractiveness as a place to live and work.”

The property will be rebranded as “The Bruckner Building” following $12 million in improvements. “The next five years will see the first waves of large-scale residential development — several thousand units are being planned for currently underutilized properties in the neighborhood and the influx of these additional residents will lead to a further expansion of retail options,” Farrell said.

“Mott Haven and the surrounding communities will continue to see interest from artists and other creative classes of tenants who can no longer afford to work in transit-friendly areas of Brooklyn and Queens.

“This mix of residential density, retail expansion, a daytime workforce, and the arts will continue to foster further expansion of the already strong and growing Mott Haven community.”

Savanna is currently considering other options in the Bronx and is far from opposed to the idea of expanding its portfolio in the borough.

While Savanna is looking at the role the Bronx will play in its future, Mark Stagg, CEO and founder of the Stagg Group, has been sold on the borough since long before it was a contender to be the next hotbed for activity.

“I’ve been building for 15 years in the borough, so I believed in the borough for a long time,” Stagg told Brokers Weekly. “I believe that the missing segment that really nobody thinks about is the household incomes from $45-80,000. Where do these people live?

“In my opinion these are the people that run the city,” said Stagg.

The Stagg Group has been developing thousands of new affordable apartments in communities throughout the Bronx for the past few years, including the new Bedford Park Manor, Webster Avenue’s first residential building since the Webster Avenue Vision Plan.

The rezoning plan was initiated by Fordham, Montefiore, the Botanical Garden and the Bronx Zoo to transform the area into a striving residential community. The 122-unit Bedford Park Manor opened late in the first quarter of 2015 and only has one unit left to fill.

“We really believed in (the rezoning plan’s) vision. We were glad to be a part of it. We’ve got great tenants, a working class community.”

Stagg said that the borough’s “proximity to Manhattan is just wonderful,” and agrees that the abundance and efficiency of transportation in the area will give it a leg up as more and more middle income New Yorkers are looking for quality housing in desirable neighborhoods.

While many see the Bronx as the borough of the future, an area that is set to develop as Brooklyn did over the next few years, Stagg feels that the future is now.

“We’re already seeing it. It’s happening now,” he said. “All of a sudden, the Bronx seems to be a hip place to live,” added Stagg pointing to the borough’s affordability and improving aesthetics.
“We’re glad to be a part of it. I always said we’re bringing Manhattan to the Bronx. We build buildings, they’re well-appointed.ˮ

Stagg feels that the next wave of Bronx inhabitants will likely be millennials that are in search of affordable housing in a neighborhood they’d be proud to post to Instagram from.

But he also believes that families will continue to play a large role in the growth of the area.
“I see a blend. I see it being a community that can serve many, from millennials to families as well.”
Eric Anton, senior managing director at HFF, agrees with the hype and shares a positive outlook on the borough, but he’s not quite ready to anoint the area as the next Brooklyn.

“I wouldn’t say it’s going to be the next Brooklyn just because Brooklyn has so many advantages,” Anton said, mentioning transportation, and the waterfront. “But I will say that’s going to radically improve.
“The transportation is very good, the subways are good,” Anton said. He feels that while it faces stiff competition from the southern boroughs, the commute time to the city is more than bearable.

”The highway access is good, better than Brooklyn,” he continued. Anton is also optimistic that the waterfront can be “developed and improved” over time.

“It’s terribly interesting. I think young people like it,” Anton said, agreeing with Stagg’s assessment. “As long as the city continues to be safe, that’s going to bode well.

“I think the next couple of waves will be millennials, singles, artists and couples that are older that don’t need good schools,” Anton added, pointing to the school systems as a possible deterrent for families with young children.

HFF, whose business in the borough is still minimal and “purely residential,” is not against diving in deeper, but at this point Anton said they are “just dipping our toe in.”

Nadia Bartolucci, a veteran residential agent with Douglas Elliman who does a large portion of her business in Brooklyn, agrees with Anton’s cautious optimism.

“The real broad scale answer is that anything is possible,” Bartolucci told Brokers Weekly. “I think in regards to Brooklyn especially, people find that it is very readily accessible to transportation.
“It’s very steadily creeping on Manhattan,” Bartolucci said, conceding that low-to-middle income families are being “priced out.”

“What’s really sad overall in Brooklyn is the people who have been in these properties for decades just can’t afford the neighborhoods anymore,” Bartolucci added.

Despite the rise in prices, Bartolucci doesn’t feel that a value increase in the Bronx will threaten the southern borough’s market.

“With all of the money that pumps into Manhattan continuously for the job market, there are always going to be individuals that have the budget for a townhouse or a two-bedroom (in Brooklyn),” Bartolucci said.

She’s likely not wrong, but as the Bronx continues to take in investment dollars and New Yorkers search for untapped territory in which to hang their hats, the northern borough will likely continue to receive even more attention.

“I think any time a neighborhood goes through transformation you’re going to see investment in bringing up the scale of the properties to a higher level” said Nelson when asked what was in store for the area in terms of upgrades.

“Look at Harlem. Look at the East Village. You couldn’t keep those buildings in their present state and have residents want to live there given the state that they were in 15 years ago.”

Saying that the “proximity to Manhattan is unmatchable” for the Bronx, Nelson feels that the borough is headed for a very interesting few years.

What’s old is new again at The Greystone