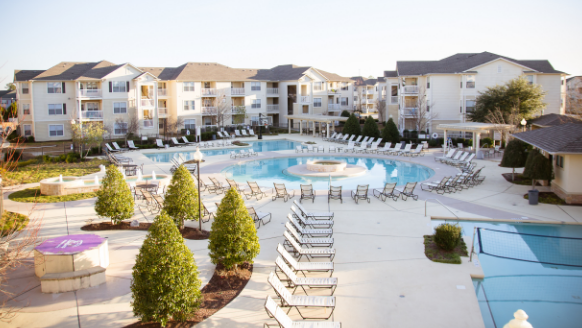 When The RADCO Companies CEO Norman Radow was in the workout business, his company foreclosed on $8 billion worth of real estate over two years.

The owners varied: some were undercapitalized developers, while others couldn’t handle their projects. Today, some of them are even spending time in Club Fed.

But they all had a common denominator, Radow pointed out: They would not change their business plan when the market told them to.

After the workout business, Radow transitioned into buying multifamily, “because Fannie Mae and Freddie Mac were there, and it had liquidity.”

But he quickly learned he couldn’t compete for shiny new apartments against the Behringer Harvards of the world, which could close in 30 days. That’s when he discovered the Class-B value-add space.

“Eighteen months later, something profound was going on,” he recalled of the year 2013. “There was the most dramatic demographic change since the end of World War II … and we were seeing it in reverse. The market was moving faster than we could catch it.”

Since then, rents have grown each year — in Atlanta, as much as 10 percent or more. “This isn’t an inning,” he said of the market. “This is a whole new season.”

His firm just closed on a multifamily deal in which tax credits are expiring, and with it, subsidized rents. RADCO is paying under-market rents, and he expects to be able to mark to market “and leave the cap rate in the dust.”

RADCO also had a project in Colorado “that was a manager’s special with all of my favorite flavors: lead paint, asbestos, aluminum wiring, and single-pane windows,” Radow said.

After rectifying the problems, re-cladding the building, and taking down the mansards, RADCO made the building look brand new and hip for Millennials. “We’re 25 percent net growth in year one, and will refi in July with 120 percent repayment in equity,” he noted.

“Since we’re talking about multifamily opportunity, everyone talks about repositioning for Millennials,” Knee pointed out. “But what about the empty nesters?”

Post Brothers president Matt Pestronk noted that Millennials are all about immediate gratification — they want to walk to, not drive, and get what they need in five minutes. And for the most part, Baby Boomers are looking for the same thing — but living in four times the size of the units of Millennials.

Post Brothers has responded by building multi-generational properties, like the large-scale gut renovation of an iconic Philadelphia apartment complex that was originally built for World War II servicemen in the ‘40s.

The developer purchased the property for $84 million, and the project, called Presidential City, will cost over $240 million, he said. Each tower will have its own identity; large units as per the Boomers and smaller units as per the Millennials, with shared amenities. Another project — “an interesting sociological experiment,” he said — will have 38 condos on the top half of the building, with units four time the size of the 151 rental apartments in the lower half of the building.

“Larger urban spaces for people selling house is a totally underserved niche in the Northeast,” Pestronk continued. But with construction prices extremely high, most of Post Brothers’ projects are rehabilitations, which means it’s hard to prove out the projects’ values during the capital-raising phase. “But when you achieve your projections everyone says, ‘I should have thought of that,’” he said.

“And what about Gen Z?” Knee asked, quickly noting that the alphabet is running out of letters.

That’s where Vie Management CEO Ari Rosenblum is playing in the student housing space. Five years ago, he said, his firm noticed a large number of buildings getting stranded, primarily those far away from campus. Years ago, a lot of capital had come into the space and the sector got frothy, and investors who were non-student housing operators were buying.

“But over time, if the buildings were not properly capitalized or not owned by a dedicated student housing owner and operator, they got stranded,” he noted. “There was no clear path for the owner to get them to profitability.”

Vie Management stepped in with a physical and management revitalization plan for the properties, and discovered that even if a property were 2.5 miles away from campus, you can attract some of the better students through creating a destination project that felt like a “spa hotel experience.”

That meant property management treating students as guests and not acting like a warden; as well as conducting physical upgrades like ripping out carpet, putting in stainless steel appliances, upgrading fitness centers, and repainting and re-landscaping. You can’t forget technology: Many of its buildings have Wi-Fi boosters, Nest thermostats, and door locks students can open with a smartphone.

“Our management has seen dramatic rent increases by looking at peers of the same vintage but just running tighter,” he said, pointing to projects like East Carolina University’s The Landing, where Vie invested five- to 10 percent of its purchase price, raised rents 11 percent, and then left 18 months later with a big IRR.

On the office side, CenterSquare Investment Management senior vice president Chad Burkhardt spoke about Fossil’s previous corporate headquarters in North Dallas, a 200,000 s/f building connected to a manufacturing building, both of which sat vacant for three years.

The company that had developed Fossil’s new build-to-suit held on to the old property and was trying to find a “unicorn,” a tenant that wanted 200,000 s/f of office.

“We all know that’s not a real thing,” Burkhardt laughed. “They hung out there for a really long time, and the pricing went down. We thought we could buy the office for $100 per square foot vacant and the manufacturing building for free.”
Its strategy after purchasing the property with a creative partner was converting the manufacturing building to covered parking, therefore increasing the parking ratio, an important amenity for Dallas.

“If you don’t have an edge on parking, we won’t even touch it,” he said. Within six months, the building had a lease with a Fortune 50 company for 12 years

It had a 10-year CMBS loan maturity this October, and the firm bought it for the long term. Argosy replenished the reserves, put a small amount of money in it, and retenanted it.

In a little under a year, Uber signed on to be a ground-floor tenant, turning it into a creative tech building.

“When we underwrote the building, we planned on waiting for loan maturity, rebalancing the loan, and putting new equity in it,” he said. “When we finished the business plan, we asked, ‘Why don’t we test the market?’ It was purchased by a big technology real estate firm, and we made six times our money in a little over a year and a half. It wasn’t planned or underwritten that way—we had planned to hold it for at least five years.”