Invest in the midwest

No, this is not an effort to convince investors to buy apartment buildings in Columbus, Ohio, or rehab Art Deco office buildings in Downtown Detroit Michigan or repurpose retail space in Pittsburgh, Pennsylvania.  This MIDWEST is between 6th and 10th avenues in Manhattan from 30th Street to 42nd Street—the traditional Garment District of New York City for almost a century.

For decades, the Plaza District and the Grand Central area were the most sought-after office locations in Manhattan, while the West Side was most definitely not.

In an effort to better utilize the neighborhood, the Bloomberg administration planned to build a football stadium that would have been the new home of the New York Jets and the centerpiece for New York City’s 2012 Olympic bid. This proposal was defeated in 2005 but was the catalyst for rezoning the Far West Side, extending the 7 train and beginning the 30-million-square-foot development boom that has attracted the corporate headquarters of AAA, blue chip companies such as L’Oréal, Coach, Boston Consulting and SAP.

Today, more and more tenants, including CNN, HBO, Ernst & Young, KKR and Wells Fargo are flocking to the new “city within a city,” which will include not only Class A office space, but prime retail, high-end hotels, luxury apartments and cultural attractions.

With the completion of these megaprojects finally in sight, the Far West Side is on track to compete against the Plaza District, Grand Central and the World Trade Center for the most high-quality office tenants in Manhattan. 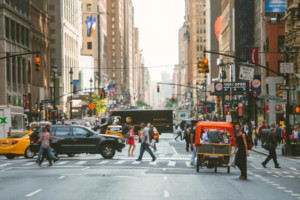 Similar to the Far West Side, the Garment District was traditionally zoned for light industrial uses, however, this may be about to change. Momentum is now building to overturn a 1987 zoning rule that requires landlords in parts of the district to preserve a portion of their building for manufacturing.  This will give landlords the freedom to update and improve their buildings to attract new tech, advertising, media, and information (TAMI)tenants.

The MIDWEST already contains over 33 million square feet of office and retail space, which makes it nearly as big as Grand Central (42.75 million square feet) and half the size of the Plaza District (66 million square feet). In contrast, Hudson Yards, Manhattan West and surrounding areas will be about 30 million square feet when completed sometime in the next five to seven years. If the restrictive Garment District zoning can truly be elevated to complement the adjacent neighborhoods, the MIDWEST would compete much more favorably with its neighboring districts.

In addition to being positioned between Grand Central, The Plaza District and the Far West Side, the MIDWEST is also served by the best transportation hubs in Manhattan, including New York Penn Station, Times Square subway stations, Grand Central Terminal, and the Path stations.  There is no office district with more transportation options granting access to the most affluent and educated workforce in the country. 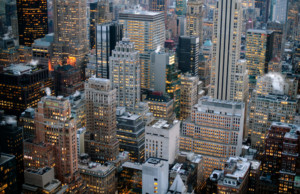 The New York City Department of Labor estimates that approximately 367,000 new jobs will be created in NYC by the year 2024. Of those jobs, approximately 141,000 are expected to be white collar office jobs.  Given that the average space per office employee in New York City is about 150 sq. ft., this means that in the next six years there will be 21.15m square feet of additional office space demand in New York City. Demand for office space will also be bolstered by the recently passed Tax Cuts & Jobs Act as additional profits lead to further expansion. This economic growth will require newly designed office space to accommodate firms servicing the Hudson Yards and Manhattan West.

Since 2014, average starting rents for office spaces have climbed quickly. Hudson Yards and the Plaza District routinely achieve office rents in excess of $100 per square foot. The Far West Side averages about $75/SF and the Plaza District’s average rent is over $90/SF. Despite its proximity, the average office rent in the MIDWEST is only $53/SF. While that is up from $44/SF in just two years, it is still largely undervalued comparatively, especially since all three of these districts have an occupancy rate of approximately 90%. Several notable first movers such as WeWork (280,000 s/f at 500 7th Ave) and Comcast (100,000 SF at 1407 Broadway) have already taken up offices in the MIDWEST, taking advantage of the undervalued space.

The Garment District was once the epicenter of America’s clothing design and manufacturing industry, but not any longer.  Today, these buildings that once housed seamstresses, pattern cutters and fashion designers by the tens of thousands, are perfectly positioned to accommodate the technology and service companies that will serve the global firms headquartered a few blocks to the west and one block to the east. Once the neighborhood is rezoned, its proximity to transportation, existing building stock and undervalued space will forge a new identity for the MIDWEST.

The last 10 years was a story of long-established neighborhoods which were re-named, and repurposed for modern office and residential uses, such as DUMBO and FIDI.  The next 10 years could be the decade of the Garment District’s transformation.