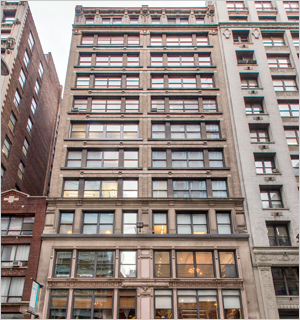 Originally built in 1911, 35 West 36th Street is a 12-story, loft-style building with 70,800 s/f of office space and 7,080 s/f of ground-floor retail. The building’s renovated lobby has two high-speed elevators that open directly into each tenant’s space.

“What drew us to acquire this building in 2007 was its central location and proximity to mass transit, including walking distance to both Grand Central Station and Penn Station,” said Abie Hidary, Hidrock CEO. “We are pleased to have seen its value increase steadily as we redesigned, renovated and re-tenanted the building over the years.”