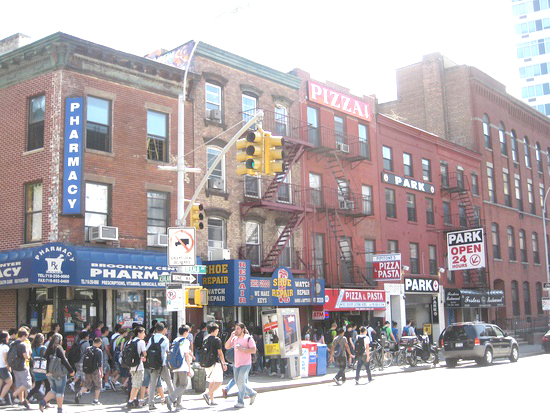 JLL Capital Markets is marketing three lots around 98 Dekalb Avenue in Brooklyn, N.Y.
The 234,972-buildable-square-foot Fort Greens development opportunity is priced at $65 million.
Bob Knakal, chairman; Brendan Maddigan and Stephen Palmese, vice chairmen; Winfield Clifford, Jonathan Hageman, Michael Mazzara and Ethan Stanton, managing directors; and William Barrett and Patrick Madigan, vice presidents, make up the JLL group handling this project.
“This is the opportunity for an investor to acquire Fort Green’s premier large-scale development site,” said Palmese. “The scale of the property would permit the construction of a full-service, amenitized building.”
“The site will have a terrific, protected view of Fort Greene Park, due to the low density of the surrounding neighborhood,” added Knakal.
The three lots located at 96 Dekalb Avenue, 98 Dekalb Avenue, 104 Dekalb Avenue and 180 Ashland Place can support the development of a full-service amenitized mixed-use building totaling 234,972 buildable square feet via its C6-4 Zoning, with Inclusionary Housing Bonus.
The site is also eligible for New York City’s 421-a and Industrial & Commercial Abatement Program tax abatements.
The site’s proximity to Barclay’s Center/Atlantic Avenue Terminal allows for a transit-oriented development.
The property offers 270 feet of combined frontage along Ashland Place and Dekalb Avenue, with the storefronts located at the eastern end of the Fulton Street Mall.

● COMPASS
Momofuko on the menu

Adelaide Polsinelli, Vice Chair of Compass and the newly launched investment sales division, along with Trystan Polsinelli, have been hired to market 169 & 171 First Avenue in the East Village, home of Momofuko Noodle Bar
“David Chang, celebrity chef and owner of Momofuko Noodle Bar, is a perfect example of a start up entrepreneur who built an international brand after launching his first restaurant here in the East Village, in 2004,” said Polsinelli.
“He was instrumental in making the East Village a destination for quality casual dining. Momofuko enjoys a long lease and will remain in the space for years to come, “ Adelaide concluded.
“You can’t ask for a better location,” added Trystan Polsinelli. “This offering is in a neighborhood driven by strong demographics and great transportation.”
169 First Avenue is a three-story mixed-use walkup with ground floor retail and 60 ft. rear garden. It has one ground floor retail space and a free- market duplex apartment on the upper floors. The property includes 6,508 s/f of unused development rights.
171 First Avenue is a five-story mixed-use walk-up cast iron façade building with ground floor retail space. It has four full-floor lofts above the retail level.
“This offering presents purchasers and end users with the opportunity to acquire a cast iron building with a built in income stream and flexible live work space,” said Trystan Polsinelli.
Both buildings have a combined ±46’ of frontage on First Avenue. The properties can be sold separately or as a package. They are expected to fetch north of $17 million.

Ariel Property Advisors brokered the sale of 124-134 Forrest Street, a leased industrial building and vacant lot in Bushwick.
The properties sold for $11.4 million, or $441 per square foot.
The 25,840 s/f industrial building and 4,990 s/f t vacant lot are located between Central Avenue and Wilson Avenue, just off Flushing Avenue.
They have 175 s/f of frontage along Forrest Street and up to Flushing Avenue.
With Citibike the current tenant on a short-term lease, the building provides stable cashflow in a neighborhood that is rapidly evolving.
Exclusive agents Sean R. Kelly Esq. and David Khukhashvili of Ariel Property Advisors represented the seller, Horrigan Development & PILOT Real Estate Group, and procured the buyer, Seagis Property Group.
“There was a lot of bidding activity on these assets since industrial assets in Bushwick, particularly single-story assets that logistically work for distribution, are in high demand,” said Kelly.
“The fact that this building had a solid tenant with a relatively short-term lease in a sector of the market that is on the rise made this a very attractive opportunity.”
Zoned M1-1, the site’s 1.0 FAR allows 30,830 buildable square feet, as-of-right, for commercial use and 54,980 buildable square feet, for community facility use.

Holliday Fenoglio Fowler, L.P. (HFF) has closed the $11.1 million sale of a nearly 138-acre development site in West Orange, Essex County, New Jersey.
HFF marketed the property exclusively on behalf of the seller, Montclair Golf Club. The Township of West Orange purchased the site.
The site at 90 Rock Spring Road offers views of the Manhattan skyline and access into the city via Interstate 280 and NJ Transit bus and train service.
The site is directly adjacent to South Mountain Reservation, a 2,000-acre park featuring Turtleback Zoo, indoor ice-skating rinks, walking trails, paddle boating, playgrounds and miniature golf, as well as a short drive to Essex Green Shopping Center and Montclair Township. The HFF investment advisory team representing the seller included Jose Cruz, Kevin O’Hearn, Michael Oliver and Stephen Simonelli.
“West Orange is excited to now own the Rock Spring Golf Club at West Orange,” Mayor Robert D. Parisi of West Orange said. “This is the premier golf course in the Mid-Atlantic region, which will now serve the entire community, our neighbors and visitors. We look forward to its success and the opportunities it presents to preserve open space and improve the quality of life.”
“We are very pleased that the town opted to pursue the land site,” Cruz stated. “The opportunity to acquire 138-plus acres in West Orange is extremely rare.”

JLL Capital Markets team has sold 157-159 Lexington Avenue in Kips Bay neighborhood for Tsoumpas 157 Group LLC.
Private investor Shaun Ajodan acquired the 12,452 s/f, mixed use building for $11.5 million.
The JLL professionals completing the direct sale assignment for Tsoumpas 157 Group included Brendan Maddigan and Stephen Palmese, Vice Chairman; Winfield Clifford, Ethan Stanton, Michael Mazzara and Clint Olsen, Managing Directors.
“This is a terrific investment, as 157-159 Lexington Avenue occupies a busy corner in the dynamic neighborhood of Kips Bay,” said Clifford.
“The property is situated between the Empire State Building and the Flatiron building and is surrounded by popular stops like Marta, Hillstone and Upland.”
The seven-story, 12,452 s/f building features 12 residential units on the second through sixth floors and a penthouse apartment with a private rooftop on the seventh floor. The ground floor space is occupied by a residential lobby and Penelope, a popular restaurant.
The property is located on the busy corner of Lexington Avenue and East 30th Street steps away from the 28th and 33rd street subway stops. Madison Square Park, the PIT, Gramercy Theater, the Kips Bay AMC, Baruch College, NYU Dental, and the School of Visual arts are all less than a 10-minute walk away from 157-159 Lexington Avenue.

Josh Goldflam, co-founder of Highcap Group, has been hired to market the largest-ever approved sub-division development site in the State of New York by Resorts World Casino.
Known as Lost Lake Resort, the property is located 90 miles north of Manhattan in Monticello in the Catskill Mountains.
It is four miles from the Monticello Raceway & Motor Club and the new billion dollar 18-story Resorts World Casino & Resort.
The property consists of a master planned 2,079 acres fully permitted with shovel-ready approved plans. The plans feature a gated community of 2,577 home lots, 30 single family cottages, 40 multi-family buildings, and a 32 room Inn with waterfront views.
There will also be an 18 hole Jack Nicklaus-designed golf course, boat dock, and a 1,000 acre wildlife preserve with trails and access to private streams.
The property plans also include an amenity villagewith a golf clubhouse and pro shop, restaurant, conference center, spa and fitness center, marina and beach facilities, a pool and bath house, tennis courts and cabanas and a sales office for new home and apartment sales.
The site is near the uResorts World Catskills Casino & Resort, a brand new Vegas-style complex, and the newly opened Kartrite Resort and Water Park, the largest water park in the State of New York.
According to Goldflam, an official asking price has not been set, but ownership has called for all best offers to be presented as soon as possible.

Newmark Knight Frank (NKF) has been retained as the exclusive agent to sell 24 Woodward Avenue, located at the southwest corner of Flushing Avenue on the border of Ridgewood/Maspeth and East Williamsburg in Brooklyn.
The NKF team led by Vice Chairman Brian Ezratty and Scott Ellard is marketing the strategically-located industrial and commercial facility, which boasts easy access to major highways and airports and is only a few minutes by car or train to Midtown Manhattan.
“The property has the advantage of being overbuilt under current zoning, providing greater capacity for last-mile distribution and office space or redevelopment into one of many other potential uses,” said Ezratty.
“There has been tremendous development activity on the part of both large-scale commercial users and investor/developers looking to transform existing structures throughout the district. The result has been significant upward pressure on property values in the area.”
The 80,875 s/f site spans nearly half a city block from Woodward to Onderdonk Avenue and the entire block from Flushing Avenue to the railroad.
While 24 Woodward Avenue is currently occupied by three tenants in furniture manufacturing, wholesale and shipping businesses, all are on short-term leases and the property can be vacated in anticipation of redevelopment.

NAI Mertz announced the sale of a historic nine-building multifamily portfolio in Center City Philadelphia.
The NAI Mertz team of John Adderly, Fred Meyer and Roy Kardon represented the ownership, The Stolker Family, in the $28 million sale.
Consisting of 100 apartment units, one commercial unit, and four dedicated parking spaces, the properties are located at 1329 Lombard Street; 415-417 S. 10th Street; 1634-36-38 Lombard Street; and 1825, 1912 and 2011 Spruce Street.
The prime locations brought more than 75 property tours and received more than 20 offers on the portfolio.