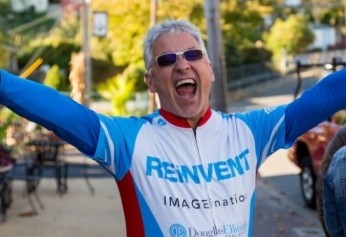 Max Dobens will lead a team of Douglas Elliman bike riders to cycle 100 miles in the fourth annual Ride to ReInvent on Sunday, October 23.
Two groups of riders will help generate awareness and funds for God’s Love We Deliver cycling to the company’s annual sales conference at the Borgata Hotel in Atlantic City, NJ.
The event began in 2013 when Dobens made the trek alone raising $3,508 for the cause. Last year 28 riders raised $181,225.

This year, the companywide ride brings together agents from Connecticut, Westchester, Aspen, LA, Florida, Long Island and New York City and more than 75 riders will be participating in both the 100 mile “Century” ride or the 35 mile “Sprint” ride.
The goal this year is to raise $250,000 for the charity.

Actress Jessica Chastain sold her Greenwich Village apartment for $1.9 million – $100,000 over the original asking price.
New York City public records published the deed transfer for the two bedroom, 2-bath on Mercer Street, which was listed by Douglas Elliman agent Kirsten Jordan and sold within a month of hitting the market in April.
The Zero Dark Thirty star bought the 1,284 s/f co-op for $1.2 million in 2012, shortly after her break-out performance as a slighted wanna-be socialite in The Help with Viola Davis and Emily Stone.
The pre-war duplex has an open kitchen with a center island, wood-burning fireplace and spiral staircase. The master suite has a double-wide closet and ceilings are over 10 ft.
According to reports, Chastain initially thought to rent the pre-war duplex at $11,500 a month and move in with her fashion executive boyfriend, Gian Luca Passi de Preposulo.
Chastain and her Italian Count bought a nine room co-op across the street from Carnegie Hall for $5.2 million in March.
The Julliard graduate reportedly fell in love with the building’s history – The Osborne Apartments were once home to Leonard Bernstein and Stephen Sondheim wrote West Side Story in the time that he lived there.

Bohemia Realty Group its hosting its Annual Howl-o-Ween Pet Adopt-athon on Saturday, October 29, noon to 4 p.m., in front of its offices at 2101 Frederick Douglass Blvd.
Working in partnership with bide-a-wee and The Mayor’s Alliance for NYC’s Animals, it is the sixth pet adoption event that Bohemia Realty Group has sponsored over the past few years.