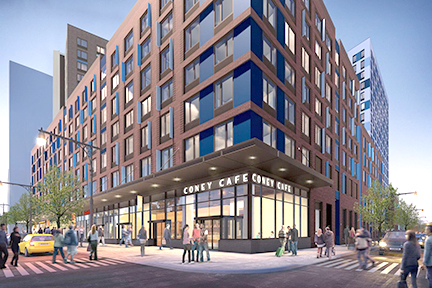 Ground has been broken for Phase I of a nearly 1,000-unit development in Coney Island.

The project’s first phase, a 100 percent affordable project designed by Handel Architects, will include 446 units for the formerly homeless, very low-, low- and moderate-income households and is expected to open in 2021.

Designed to be resilient in the face of future storms, this development will provide more than 440 affordable homes, vibrant retail space, and a new home for HRA as part of the City’s comprehensive plan to invest in the future of Coney Island.”

The first phase of the three-phase project will include two 16-story towers above a seven-story podium, with office space for the NYC Human Resources Administration occupying 66,000 s/f on the ground and second floors in one building.

The project will include two landscaped roof decks on the 8th floor for passive recreational use. The buildings will feature distinctive material and color combinations to reflect the palette of its beachfront location and fit within the context of the neighborhood.

All residential units and mechanical equipment will be located above the ground floor, and the buildings will include deployable flood barriers at the main residential entrances to prevent flooding within the building. Similarly, the retail spaces will be flood-proofed, providing resiliency to future businesses.

Phase 1 of the project builds on ongoing City investment across the neighborhood to create affordable and mixed-income housing, infrastructure upgrades, and new cultural offerings including the restoration of the historic Child’s Building, the new 5,000-seat Ford Amphitheater, and the recently-opened Ocean Wonders: Sharks! exhibit at the New York Aquarium.

In 2009, a 19-block rezoning created a 27-acre amusement and entertainment district on Coney Island, along with plans to develop new amusements and thousands of affordable and market-rate homes.

The full implementation of this plan, which continues today, is expected to generate up to 6,000 permanent jobs, 25,000 construction jobs, and $14 billion in economic activity.

Phase I of the new development, designed by Handel Architects, is expected to open in 2021.

Norten over the moon with new NASA assignment