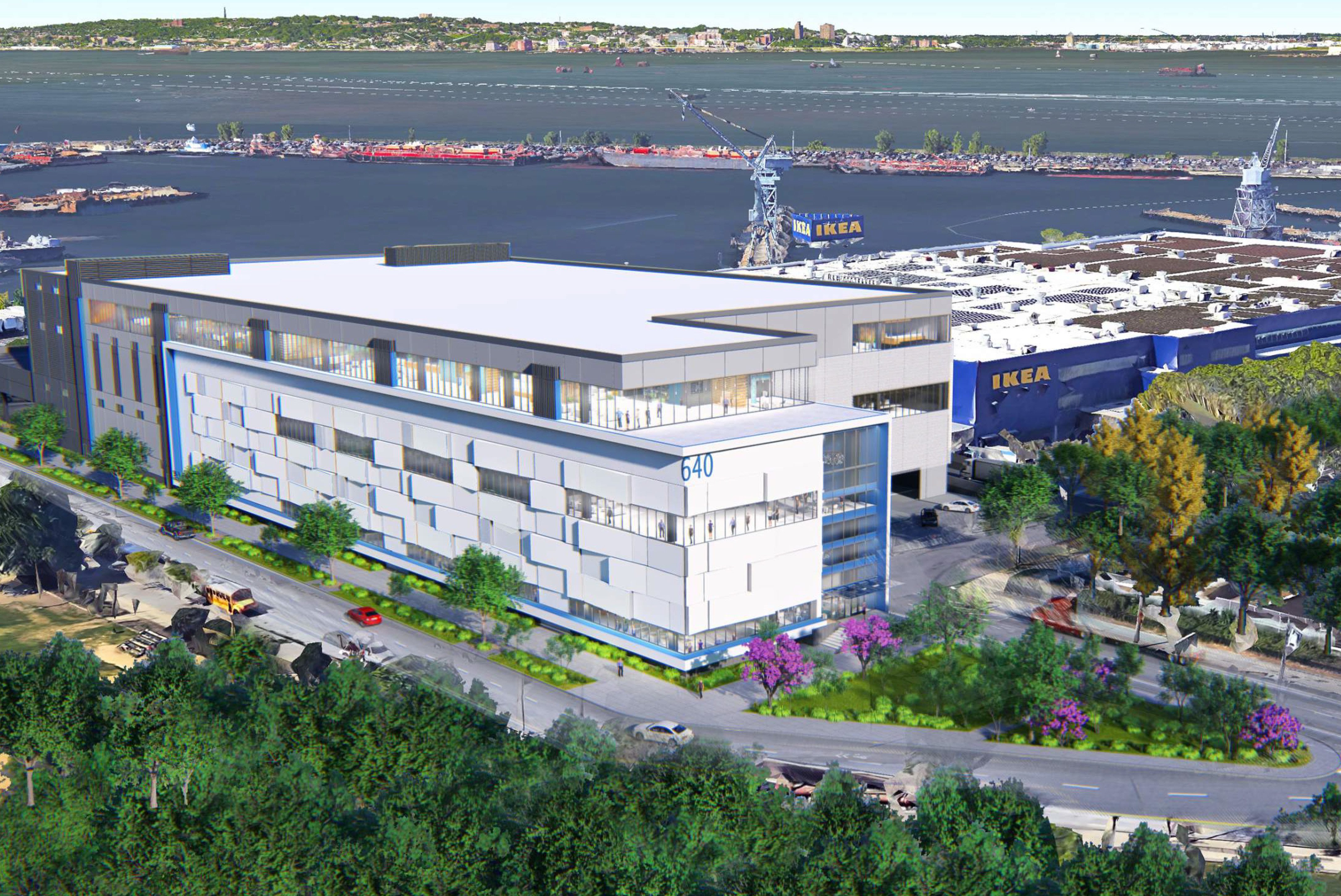 Red Hook has seen its fair share of industrial structures during the past century but nothing quite like the 370,000 s/f warehouse slated for construction at 640 Columbia Street.

In fact, at three stories tall, it will be the tallest ecommerce distribution center on the East Coast and a mere stone’s throw from the heart of New York City.

Financed by a joint venture between Goldman Sachs and DH Property Holdings, the Ware Malcomb-designed building will include 130-foot truck courts on the first two levels that can accommodate full-size tractor trailers as well as 28-foot ceilings, 33 loading doors and an attached parking deck.

“We believe 640 Columbia is at the forefront of the next evolution of industrial development, as growing e-commerce demand drives competition to deliver products faster and faster to the consumer,” Joseph Gorin, co-head of Golden Sachs Asset Management Private Real Estate, said. “Our project aims to capture this demand for efficient warehouse and distribution facilities in urban-infill locations.”

Growth in the ecommerce sector has made industrial space has a hot commodity in the throughout the country. Goldman Sachs, alone, has gobbled up 2.6 million s/f of industrial property in the past year and a half.

Industrial assets are particularly limited within the five boroughs, especially those within close proximity to the city’s major transportation arteries. As such, adjacent markets, such as the New Jersey Meadowlands, have fared particularly well as locations for so-called “last-mile” deliveries.

Still, ecommerce specialists such as Amazon and Wayfair as well as traditional retailers like Walmart, Best Buy and Target are all clamoring to set up order fulfillment centers as close to city centers as possible to enable same-day deliveries. For Dov Hertz, founder of DH Property Holdings, this trend spelled opportunity.

“New York City has the highest population and greatest density of any city in the US, but has a severely undersupplied warehouse market,” Hertz said. “640 Columbia will offer tenants a product that does not currently exist in the market and the location provides companies with immediate access to their end consumers.”

Known for targeting underperforming assets in New York, DH Property Holdings partnered with Goldman Sachs to purchase the four-acre property from The 601 West Companies, which bought the site for $21 million in 2014. A Hodges Ward Elliott team of Will Silverman, Paul Gillen, Daniel Parker and Kyle Van Buitenen brokered the most recent sale, which was first reported in November 2017, although the closing date and sale price have yet to be released.

Prior to the sale, 640 Columbia, which is next to Ikea Brooklyn, was occupied by Ferrara Brothers Building Material so, like most industrial investors, DH Property and Goldman Sachs will build from the ground up.

Elsewhere in the tristate, some warehouses a decade old are already functionally obsolete, lacking the size, technology and security desired by today’s ecommerce tenants, but that hasn’t stymied the industry, which hovers near full occupancy. Some developers have even opted to remediate brownfield sites in New Jersey just to open up more space.

While the supply of Class A industrial property continues to dwindle, the demand shows no sign of letting up. Robert Kossar, international director and industrial special at Jones Lang LaSalle, said that is what made 640 Columbia so enticing.

“This site offers a unique ability to penetrate a last-mile market with significant scale, something companies were previously unable to do,” said Kossar, who will lead JLL’s leasing and marketing team at the facility.