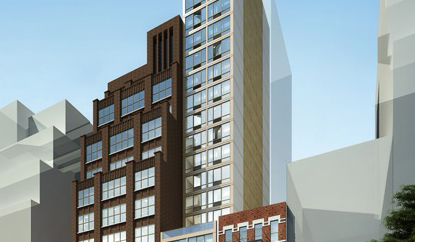 The $10 million West 38th Street project is being developed by Optima Real Estate.

With only four rooms per floor, most with natural light and views of the city, visitors will enjoy an unusually private and quiet guest experience. Amenities will include a 250 s/f roof deck, a fitness center, and a breakfast room.

“The development of this 25-foot site in a neighborhood once regarded as having no development potential shows how quickly it has become a premium hospitality location,” said Gene Kaufman Architect founder and principal Gene Kaufman.

“This formerly industrial area is now being embraced architecturally with elegant facades and deluxe interiors. With this project, we are not only capitalizing on this new situation. We are also giving the project further upside potential so it can continue to benefit from the neighborhood’s rising fortunes.”

The Holiday Inn New York-Times Square South is part of the Intercontinental Hotel Group of hotel brands. The 35-story, 103,100 s/f hotel at 585 Eighth Avenue has been developed by IMDN Holdings LLC.

Guests will enter through a 2,200 s/f landscaped public plaza with a 33 ft high greenwall and café-style seating. The 10,000 s/f of bonus floor space created by the public plaza enabled IMDN Holdings to add 25 extra guest rooms to the hotel.

The hotel’s interiors have been designed by Hotel Depot Services and the landscape design is by Eberlin & Eberlin.

Said Kaufman, “This is our eighth hotel on this block and visually the most prominent, with major avenue frontage and an expansive public plaza facing directly on to it. The plaza will generate millions of dollars of extra value for IMDN and incalculable value for the residents and tourists who will be able to use it.”

The latter opened after being completely reimagined by the architecture firm.

The latest IHG locations to be designed by Gene Kaufman Architect, Holiday Inn Brooklyn-Nevins Station at 300 Schermerhorn Street and EVEN Hotel Brooklyn at 40 Nevins Street, will open later this fall.

Holiday Inn Brooklyn-Nevins Station will be a contemporary 90,000 sf, 246-room hotel with 15 floors offering more than 3,000 sf of meeting and event space.

Chakrabarti launches his own company

New report warns New York will have plenty of apartments, but no roads or rails to get people there