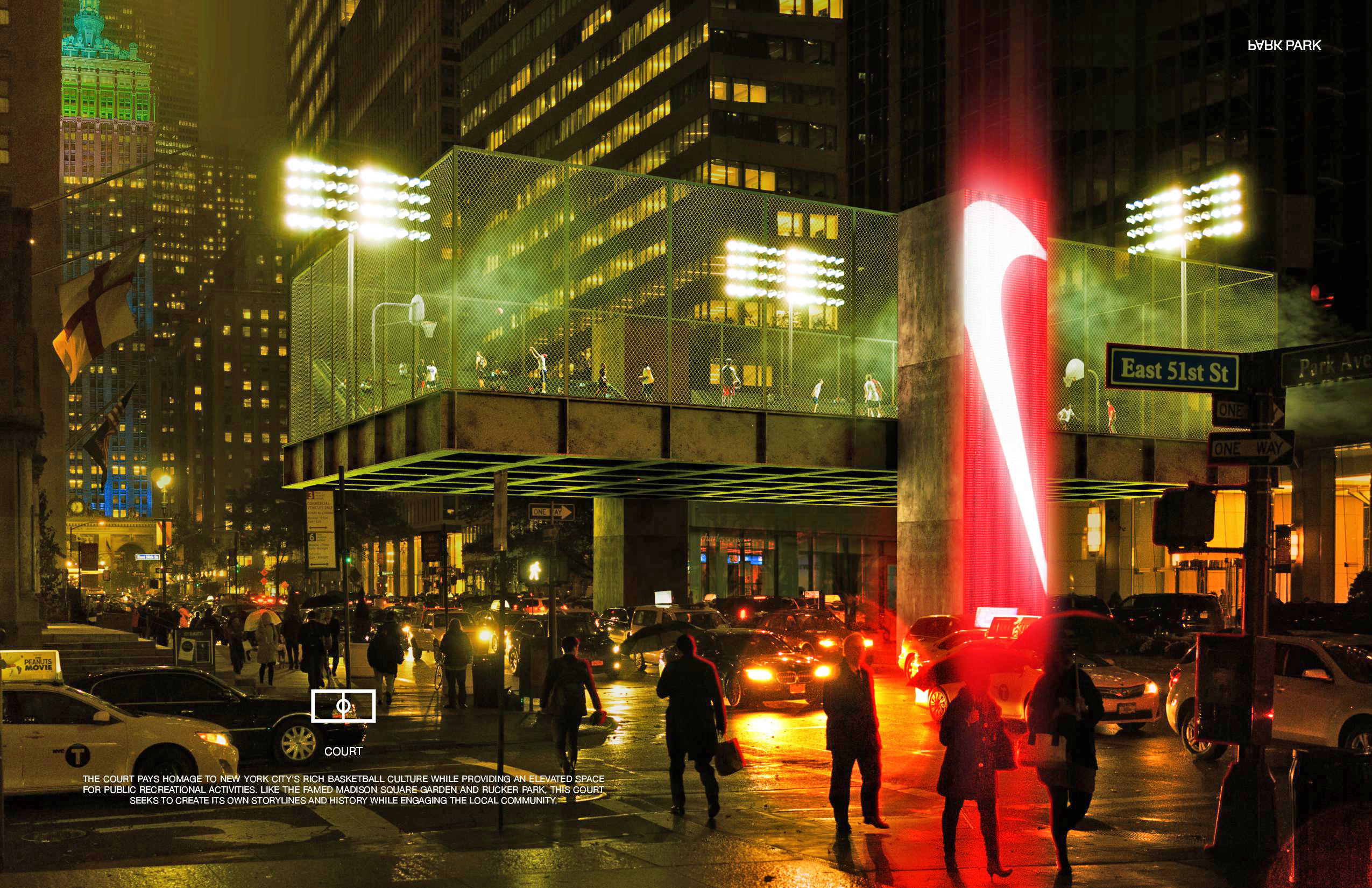 Fisher Brothers gets everyone talking with Park Ave. plans

A design that puts a concert venue, basketball court and an art gallery smack in the middle of Park Avenue is expected to get people talking about how the median space on the block could be better used.

Called Park Park, the design by Ben Meade, Anthony Stahl, and Alexia Beghi of design firm Maison, was chosen as the winner in a competition run by Fisher Brothers to re-imagine the underutilized islands unconstrained by zoning codes, cost, weight limits or other restrictions.

The result was nearly 150 ambitious entries showcasing such curiosities as an aquarium, Alpine mountain and botanical circus, as well as urban amenities like seating areas, landscaping and walking paths. The finalists were displayed in the public atrium of Fisher Brothers’ Park Avenue Plaza tower, where New Yorkers could vote on their favorite ideas.

“We were overwhelmed by the large and enthusiastic response to this competition, and it was exciting to witness firsthand how deeply the participants embraced our call to be innovative and bold,” said Fisher Brothers Partner Winston Fisher. “Our intent was to open people’s eyes to new possibilities, and we hope that this competition will be viewed as just the beginning of the conversation about the future of Park Avenue.”

In the “Park Park” design, the iconic boulevard would be transformed via a series of raised platforms incorporating venues intended to attract New Yorkers and visitors to the centerline in different experiential ways.

The spaces include: The Stage, a performance space to hold concerts and shows; The Gallery, a triplet of glass cubes that serves as a rotating art gallery and showroom; The Gardens, a seasonally-curated pathway that provides a lush respite in the city; and The Court (pictured top) an elevated basketball court that pays homage to New York City’s rich basketball culture.

Fisher Brothers launched “Beyond the Centerline” competition in October 2017 with an open call for ideas to enliven and activate the medians for a new generation of New Yorkers. Participants were encouraged to stretch the limits of their creativity and submit their boldest visions.

In addition to the $25,000 jury prize, Fisher Brothers awarded a $5,000 prize to “Park River,” designed by Amy Garlock, Drew Cowdrey, and Fareez Giga of architecture firm Local Architects, which won the popular vote. Understanding that New York’s waterways are underused and difficult to access from the heart of the city, “Park River” is designed to produce a new kind of shoreline – one that is accessible, recreation-focused, and instantly creates a new way to experience the city from within.

“Park River” re-centers the roadway and creates a river that loops along the sides of Park Avenue between 46th and 57th Streets. The design allows for kayaking in warmer months or ice skating in the winter, and its expanded plazas offer destinations for boating, dining, and lounging. “Park River” would instantly create 11 blocks of waterfront property in Midtown and become an amenity for any building along the waterfront.