EVO Real Estate Group, a member of NAI Global, has been chosen as managing agent for TurnStyle, the much anticipated underground shopping concourse at the heavily trafficked Columbus Circle subway station beneath Time Warner Center. 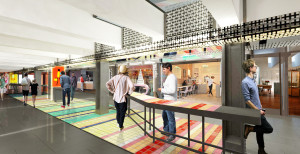 As TurnStyle’s agent, EVO will be responsible for operations of the concourse, which will serve daily commuters, local residents, and visitors. The station is home to the A, B, C, D and 1 lines, and is the seventh busiest in New York City, servicing more than 90,000 daily commuters, according to recent figures from the MTA.

EVO’s appointment was the outcome of a comprehensive search, with extensive interviews of many firms, explains Susan Fine, the developer of TurnStyle. She notes: “We are excited to have found a competent and intelligent operator who believes in the space as much as we do.”

“TurnStyle is a genuinely creative concept that is extremely attractive to retailers,” says Josh Halegua, principal of EVO. “It’s an honor for us to play a role in its success.”