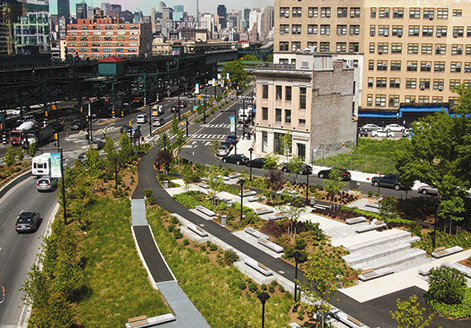 The site was purchased from a joint venture between Property Markets Group and Kamran Hakim for $167 million.  The original plan for the site included condominium residences, but Durst intends to build a one million square foot 1,000-unit residential rental tower under the proposed 421-a program if it passes.

The proposed 421a program requires that at least 25% of the units be affordable.  In addition to the tower, the site will include a half-acre public park and a renovated entrance to the Queens Plaza subway station.   The transaction also included the purchase of the landmarked 49,300 square foot Queens Clock Tower Building.

“This is an extraordinary site with spectacular views and outstanding mass transit connectivity,” said Jonathan (Jody) Durst, President of the Durst Organization.  “The project provides us with the opportunity to build much needed market-rate and affordable housing and to make the long-term investments in New York City that have been the bedrock of The Durst Organization’s success for more than 100 years. We look forward to joining, and working with, our new neighbors in Long Island City.”

“There were a myriad of legal issues that stood in the way of a successful purchase of the Queens Plaza Park site,” said Lefkowitz. “We needed to determine if the project would be eligible for tax credits under the Brownfields program, and there were several layers of agreements and easements between the Metropolitan Transportation Authority and the prior owner relating to the MTA’s East Side Access project being conducted on and adjacent to the location.”