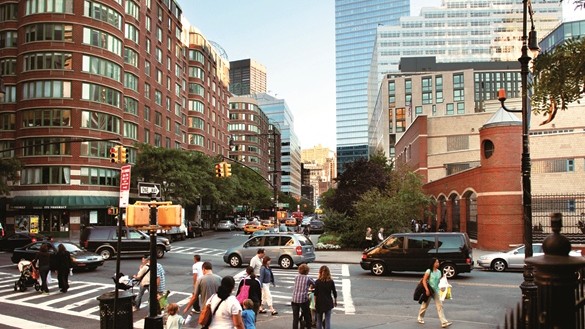 Downtown champion Robert Douglass dead at the age of 85

The Alliance for Downtown New York is mourning the loss of founding chairman Robert Douglass. He died on December 6 at the age of 85.

In addition to his seminal role as the Alliance’s Chairman from 1995-2015, Douglass was also a lifetime director and former chair of the Downtown Lower Manhattan Association, and through every role he held was a staunch advocate of Lower Manhattan businesses and residents.

In his work with the D-LMA and as Counsel and Secretary to New York Governor Nelson A. Rockefeller during the late 1960s and early 1970s, Douglass played a formative role in shaping downtown New York. His fingerprints were on everything from Battery Park City to the original World Trade Center.
For decades Douglass worked assiduously to make Lower Manhattan a premier global address for businesses, residents and visitors.

Working closely with a small group of urban visionaries, he helped reshape the neighborhood as an advocate for the conversion of Downtown’s vacant office space to residential properties and the establishment of a business improvement district.

Following the devastating attacks on 9/11, he became a leading voice on the efforts to rally and rebuild Lower Manhattan into the vibrant community that it is today.

“He was a giant and a gentleman, and it is nearly impossible to overstate his influence on this neighborhood,” said Downtown Alliance president Jessica Lappin. “For more than 30 years, he championed Lower Manhattan’s growth and played a significant part in its recovery after the 9/11 attacks. As an advocate for businesses and residents, he has helped articulate a compelling vision for a Lower Manhattan for the 21st Century. Lower Manhattan simply would not be what it is today without him.”

After receiving the Liberty Award at the Lower Manhattan Cultural Council’s annual gala in 2012, Douglass described Lower Manhattan’s extraordinary recovery after the 9/11 attacks and added: “I consider myself the luckiest guy in the world to have had the opportunity to play a part in this incredible transformation.”

In 2005, Douglass was appointed by New York Governor George Pataki to the Board of the Lower Manhattan Development Corporation. Pataki described Douglass as “a tireless advocate for Lower Manhattan for decades” and a “dynamic, committed leader who brings the vision, experience and expertise to ensure that we realize the Master Site Plan for the World Trade Center and ensure that Lower Manhattan remains the financial capital of the world for generations to come.”

In a statement, the Downtown Alliance said, ” We are forever indebted to Robert Douglass for his vision, service, and dedication to making Lower Manhattan what it is today. The city has lost a remarkable civic leader.”