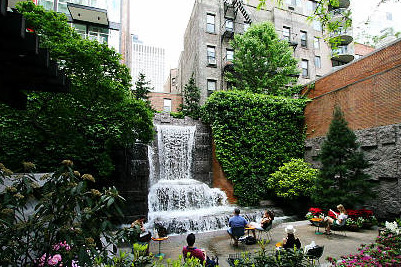 New Yorkers treasure our green spaces because they play such an important role in our city life. REBNY has always supported thoughtful approaches to urban planning that promote a healthy balance of new development and open space — look no further than the Greater East Midtown Rezoning as an example.

The Greater East Midtown rezoning is critical to the overall economic health of our city, benefitting residents, commuters, businesses and our treasured landmarks. A critical goal of the Greater East Midtown Rezoning was to tie new development to the improvement of the public realm. The proposal is crafted so that new development that utilizes the rezoning will result in the creation of more public realm improvements including open space.

However, concerns have recently been raised about potential shadow impacts on Greenacre Park, a charming vest pocket park located on East 51st Street. These concerns are overstated and inaccurate. Some have argued that the Greater East Midtown rezoning will block all of the sunlight that has made Greenacre Park popular among local residents and workers. But discussions around public policy must be guided by facts, not hyperbole. In this case, the facts simply do not support the concerns that were raised regarding Greenacre Park.

First, the majority of the Park will be unaffected and continue to receive an abundance of direct sunlight that will not adversely impact vegetation or park usage regardless of what is built following the East Midtown rezoning. Only the park entrance stairs, which have no vegetation or seating, could potentially receive 30 minutes of new shade. Further, lunchtime peak usage hours will be completely unaffected as the shadows are only expected in late afternoon.

Second, because the Park receives the majority of its sunlight from the east during the morning hours, development that occurs west of the park will not adversely impact the abundant sunlight the Park receives.

And finally, it is important to note that the rezoning is crafted so that any new development that utilizes the rezoning will be required to provide necessary funding for the creation of new open and green spaces for the local community—open spaces that will remain open year round. In short, the rezoning serves the same needs the Park provides.

Greenacre Park (pictured top) is a wonderful oasis in the heart of bustling midtown. In fact, it is located just steps from REBNY’s headquarters on Lexington Avenue, and I have visited the space many times. I am pleased to know that its greenery will not lose the sunlight that helps to make it so special, and I look forward to stopping by Greenacre Park again sometime soon, and I hope you do too.

The Greater East Midtown rezoning will ensure the neighborhood remains a prominent commercial district and regional transit hub. By enabling much-needed commercial development and rescuing East Midtown from becoming obsolete as a business center, this rezoning will grow New York City’s economy and benefit residents, commuters, businesses and all of our treasured landmarks.  Let’s not lose sight of the forest for the trees—or rather the shadows.

Join us this Tuesday, June 13th at our 19th Annual Retail Deal of the Year Awards Cocktail Party to network with and celebrate the real estate industry’s top retail dealmakers for their outstanding transactions completed in 2016. The two most creative and significant retail transactions, among the 14 deals submitted for the competition, will be announced at this annual event to be held from 5:30 to 7:30 p.m. at Club 101 (101 Park Avenue). Sponsors of the cocktail party include: Cushman & Wakefield, Eastern Consolidated, Jack Resnick & Sons, Lee & Associates, Ripco Real Estate, Rose Associates, and The New York Times. Visit rebny.com to register and view the list of award submissions.

On Friday, June 16th from 9:15 to 11:00 a.m. at St. Francis College in Brooklyn, Catherine Witherwax of Stribling & Associates will lead a free-for-members event about pricing in today’s Brooklyn market at our Brooklyn Inside Secrets of Top Brokers and Industry Leaders Seminar, “How to Know the Price is Right”. Experts Louis Belisario of Fillmore Real Estate, Beth Kenkel of The Corcoran Group, William S. Ross of Halstead Property Development Marketing, and Steve Sallion of Warren Lewis Sotheby’s International Realty will discuss the ins and outs of the borough’s residential market, how to find and analyze appropriate comps, and how to determine the right price to create value-add marketing collateral to sell exclusives.