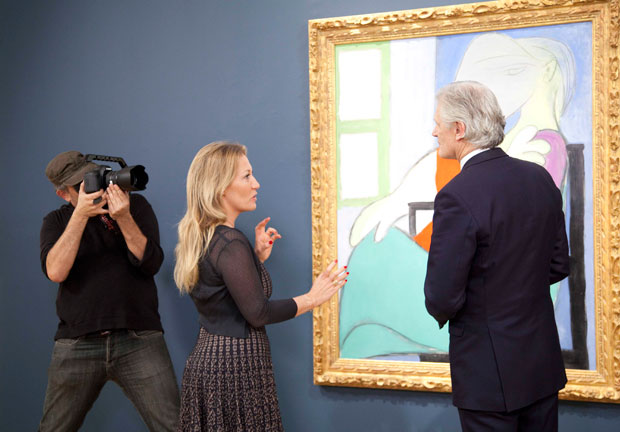 Last year, the Spanish-American painter was reportedly sued by his then landlord Carolyn Benitez for damaging the ceilings, floors and antique art in the house she owns with music producer husband, Jellybean Benitez.

We’re sure there was plenty of room for everyone. The 9,965 s/f triplex has a wood-paneled library, eat-in kitchen, patio and garden on the ground floor. A grand staircase leads to the parlor level and living room, which is apparently wrapped in Louis XIV paneling with 14 ft. ceilings, a wood-burning fireplace and floor-to-ceiling windows overlooking Gramercy Park, according to a 2013 listing with Keller Williams NYC.

“This is one of the most exciting marketing campaigns because it showcases the distinct talents of the people who work here,” said Sarah Saltzberg, co-founding principal of the brokerage.

“So many of our agents are also artists and performers, which we embrace and encourage. I’m excited to watch the series evolve as time goes on.”

Saltzberg herself is a Tony Award-winner having co-written and performed in The 25th Annual Putnam County Spelling Bee which earned two Tony’s and a Grammy in 2005.