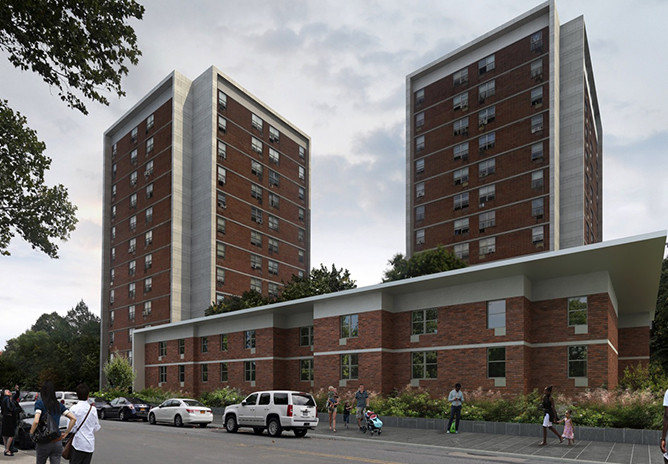 Despite the myriad new rules and regulations, investors still interested in workforce housing

James Nelson of Cushman & Wakefield sat down with Eben Ellertson of L+M Development Partners, Adam Parkoff of The Parkoff Organization, and Nicholas Kamillatos, a Rent Regulation and Incentive Program attorney at Rosenberg & Estis to discuss the New York City multifamily market and the effects of new regulations.

James:  Please tell us about your company and what you do.

Eben:   L+M is a New York City-based investor, owner-operator and developer of market-rate, workforce and affordable housing.  I run a fund management group  that L+M launched in 2010 called the New York Affordable Housing Preservation Fund (NYAH), a real estate private equity fund created to invest in affordable and mixed-income multifamily properties in low-and moderate-income neighborhoods in the New York City metro area. To date, NYAH has acquired and/or financed the acquisition of over 8,000 multifamily units with a total capitalization of over $1 billion.  Generally, we look to invest at least $15 to $20 million of equity in each transaction.

Adam:   The Parkoff Organization has been in the business for over 80 years, starting back in 1936. We operate as far north as Scarsdale in Westchester County, and as far south as Bay Ridge right by the Verrazano Bridge, and we are in four out of five boroughs. Our portfolio mainly consists of six-story elevator buildings in Manhattan and the boroughs.  Over the last five years we did acquire more office and retail. Our core competency has been and still remains the multifamily housing market.

Nick:  Rosenberg & Estis’ client base includes the old real estate families that have been in the business as operators and developers for generations.

Personally, I do regulatory law, which is seeing more clientele like L+M.  Regulatory law for residential development has become more innovative in the last 10 years, using declining interest rates and government programs and loan facilities to create new residential development. I think that the two in combination are a very important point to keep in mind when assessing where the multifamily business is now, and where it is going, because I think everyone is going to need a combination of the two. I also think management and operations are going to become increasingly important, because of the complexity of the legal environment we are seeing.

Because of the growing population and the growing workforce, there is always a need for housing in New York City, so the opportunity to create new housing is there. More and more lenders are taking interesting and innovative ways to provide financing, and the city is looking to create incentives to do that new housing.  But it comes at a cost, and the cost is affordability and rent regulation.

James:    When you look for an investment, what catches your attention? How do you execute on it?

Adam:   It is helpful that we have no obligations to put money on the street, we are not fee-driven. The last deal we closed was in December 2015. On that deal, I had just lost a deal in the Astoria neighborhood and I literally sat in my car for about a week just circling the neighborhood, writing down addresses and sending them to my favorite brokers asking them to get me a meeting with the owner.  I got one meeting on one of the properties and I bought it.  We have had tremendous success in operating the property and we are confident that eventually something will happen there.

The market right now is a confusing one. Seller expectations remain high, and buyers’ expectations are a bit lower than they should be. But we are starting to see opportunity, and at a certain point we do want to deploy capital and put it to work.

Eben:  We invest out of closed-end funds, so we have a finite investment period, so we do have some pressure to invest our capital, although these funds are modest in size and we can afford to be patient to find opportunities that make sense. We recently bought a project-based Mark-Up-To-Market Section 8 deal on the Upper West Side of Manhattan where housing is restricted to families that earn below 50 percent of AMI (Annual Median Income).  For these types of highly regulated deals, we always want to try to buy very well-located real estate.  This project is located at 109th and Manhattan Avenue. We like that submarket a lot, and it is a block from Central Park. Typically, what we will do on these types of deals is to extend the existing federal and local regulatory agreements to provide long-term affordability as well as invest capital to address deferred maintenance and re-position the assets.

James:  What are the two or three big takeaways from the Rent Guidelines Act that are new? For those who own rent regulated product, what do they need to be aware of today? What is still up in the air, open for discussion?

Nick:   The Rent Act is a state law. Rent regulation in New York City is actually owned by the state government. New York State’s constitution puts power in the hands of the legislature. The state legislature, by and large, delegates to local governments zoning and tax rates, but what the legislature does not delegate, stays in state hands. In 1971, three acts were passed by the state legislature, vacancy-decontrol, non-primary residence, and the Urstadt Act.  The Urstadt Act said that New York City cannot adopt any more restrictive regulations than there were in effect at the time the Urstadt Act was adopted.

The advocates looking to abolish the Urstadt rule want the New York City Council to run everything. The real estate industry is very much opposed to that, and wants the state legislature to keep control, because that allows the politics in Albany to have a place with a fairly conservative senate, a very liberal assembly, and a governor in between trying to act as referee. That is what the industry, by and large, wants.

The rules are getting more complex and treacherous, and politics, unfortunately, is one of the reasons why they become treacherous. Our politicians have various constituencies they have to pay attention to, and a very big constituency in New York State is the free housing advocates. To keep them happy we see hyper compliance enforcement. That is one of the reasons that management and operations is becoming increasingly important for residential properties, whether they are straight operators or whether they are developers.

James:    It would seem that it is a very pro-tenant environment. Adam, at this point, why would you ever consider buying another rent regulated property again?

James:   Nick, can you explain the impact of the Altman ruling and Airbnb on New York City landlords?

Nick: The Altman rule is going to have a major impact on the market segment of the upside deals that were from 1996 ’97 to 2007 where a large portion of the building was deregulated and now is possibly subject to re-regulation.

The Altman rule says that the vacancy that you used to get the rent above the threshold did not count for deregulation. You had to create the legal rent above the threshold, rent it to that tenant, and then on the next vacancy you became de-regulated, but only on the next vacancy. And suddenly thousands of deregulated apartments were put into play as potential re-regulation candidates. Not only re-regulated, but subject to rent rollbacks and refunds to the tenants who were in possession.

Then, last October the Appellate Division affirmed treble damages for having collected the market rent in the first place. So an owner who lawfully deregulated an apartment and lawfully created market rents, is now being told that they had the rule wrong, and that the apartment it is still regulated.  These owners are now liable for treble damages from having lawfully taken market rents, and then learning they were re-regulated.  The refund itself is capped out at 48 months and trebled during the last 24 months, but the rent adjustment will go to whatever date the last stabilized tenant was in possession.

The Altman rule was statutorily put into the law in 2015, so any vacancy occurring after June 2015 does need the second vacancy to de-regulate it.  It is now the general rule for all rent stabilized apartments, or at least we have notice of that rule change for post-June 2015 vacancies.

The Airbnb rule that was enacted by the state legislature in Fall 2016, is generally a favorable thing for property owners. The penalty is owed by the person who advertises, and the person who collects the rent. So your tenants who go online or your entrepreneurs who rent four or five apartments, who go online and advertise and collect Airbnb rents, they are the ones who are liable for the penalty. Property owners should be monitoring the online world for their building address to see who is renting out apartments, and contact the authorities and have that person fined for the unlawful short stay rentals they are doing. Unlawful rentals are those shorter than 30 consecutive days.  Every New York State Class A multiple dwelling has to be rented for 30 days or longer to a person who actually stays 30 days or longer; you cannot have consecutive occupants within the 30-day period.

James:  What are some of the neighborhoods that The Parkoff Organization thinks are up and coming? Or is it really just the established ones that you’re looking at?

Adam:  We still love the working class neighborhoods. I will take my workforce housing over luxury housing most days of the week. I love the buildings in the good areas of the boroughs. The Bronx, for example, is a borough where there is still significant room for rent growth. In the middle to higher income areas in the other boroughs, the rents have already seen significant growth.

** Since the Roundtable, the Court of Appeals granted the Altman case owner’s motion for leave to appeal, so the state’s higher court will now review all aspects of the Altman decisions.