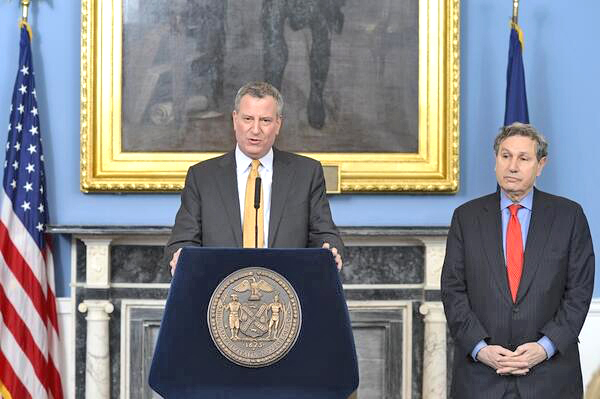 The City will develop a new Applied Life Sciences Campus oin the east side of the city similar to the Cornell-Tech model and work with schools and teaching hospitals to create new curricula focused on skills-building in the life science sector and develop a paid internship program.

“We have to break the vice grip of stagnant wages and the ever-rising cost of living in this city. That’s why we are giving thousands of New Yorkers a foothold in the 21st century economy through paid internships, training and career-track jobs,” said Mayor de Blasio.

“We are creating a springboard into the innovative Life Science economy for our workers, innovators and startup businesses that will make our whole economy stronger.”

With 16 percent growth in jobs since 2009, the sector is among the fastest growing in the city. It offers a range of technical jobs such as microbiologists and lab technicians, as well as non-technical jobs in areas like marketing and administration. Roughly 30 percent of jobs in the industry require only a high-school diploma or Associate’s Degree, while another 50 percent of jobs require only a Bachelor’s Degree.

With more than 100 research foundations and nine academic medical centers, New York City is home to one of the largest concentrations of academic life sciences research in the world.

However, challenges such as a shortage of commercial laboratory space have made it hard for New York City to hold on to young companies spinning out of its research institutions.

According to the mayor’s office, LifeSci NYC will generate 9,000 new direct jobs in the sector, 7,000 new jobs in related fields, and 7,400 construction jobs, increase economic output by $2.5 billion a year, attract $6.5 billion in additional private investment, and generate $1 billion in tax revenue.

A further $300 million will be offered in tax incentives to attract investment in commercial lab space and land use policies are to be “modernizedˮ to encourage new space for life sciences firms.