Conforming the 421-a and MIH Programs

Many of our clients have asked us how they can avail themselves of the state’s revamped 421-a tax exemption program — the Affordable New York Housing Program — on a project that is also subject to the city’s Mandatory Inclusionary Housing program (MIH). MIH was adopted in 2016, before the 421-a program was reinstated by the state legislature, but it was assumed that 421-a or a similar tax-exemption program for affordable housing would eventually be enacted. However, some of the requirements of the two programs do not squarely align. In particular, developers attempting to use both programs in the same project may find it challenging to coordinate the income levels dictated by the respective programs.

Both MIH and 421-a offer a menu of affordability options.  In order to use both programs on a single project, a developer will need to comply with both sets of income limits, in addition to the income limits of any other financing used for the project. The income limits of MIH are primarily expressed as a weighted average, and any combination of income levels in up to three income bands is permitted (below a maximum level), so long as the weighted average is achieved. In contrast, 421-a does not allow the flexibility provided by the weighted-average requirement, but instead prescribes specific percentages within specific income bands. The income categories of the 421-a program and the MIH categories that most closely match the 421-a categories are summarized below. 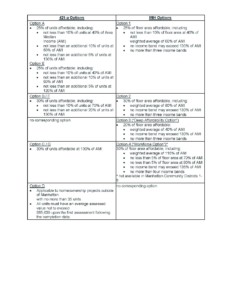 Comparing these income limits, it becomes apparent that a solution that maximizes the tenant income under 421-a would not comply with the weighted-average requirements under MIH. The following examples illustrate this problem. Assuming a developer would attempt to maximize the tenant income in each band permitted by 421-a, the corresponding weighted averages would be as follows. 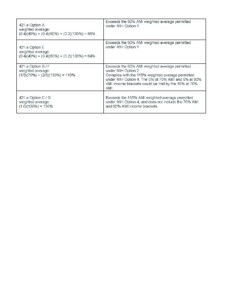 Accordingly, a developer would need to lower the tenant income level in one or more income band, below the maximum permitted 421-a income level, in order to comply with the MIH weighted averages.

MIH and 421-a also differ in their regulations regarding the use of other forms of public subsidies in an affordable development.

For Option 1 under MIH, there are no restrictions on the use of additional public subsidies. But under 421-a Option A and Option E, no public subsidies are permitted, except for tax-exempt bonds and 4 percent Low-Income Housing Tax Credits. Thus, a developer seeking to use 421-a Option A or Option E or may need to forgo subsidies that would otherwise be available under MIH Option 1 (e.g., grants, loans, below-market property dispositions).

For Option 2 under MIH and also Option B and Option F under 421-a, there are no restrictions on the use of additional public subsidies. However, as illustrated above, the income levels of 421-a Option B and Option F would significantly exceed the weighted-average income permitted under MIH Option 2. If a developer instead tried to pair 421-a Option B or Option F with MIH Option 4 – the “Workforce” option, available outside of Manhattan, which more closely matches the income levels of these 421-a options – the developer would not be permitted to use additional public subsidies.

This compatibility issue would not be a concern in using MIH Option 4 with either 421-a Option C or Option G.  In each case, no additional public assistance is permitted.

The 421-a program also does not allow one of the primary areas of flexibility allowed by MIH:  the ability to locate affordable units off-site. MIH permits the “generating site” to be located on a different zoning lot from the “compensated zoning lot,” provided that the generating site is located with the same community district or within ½ mile, and provided that the affordable housing percentages are increased by five percentage points in such cases (e.g., from 25 percent to 30 percent, or from 30 percent to 35 percent).  However, this off-site option is not permitted under 421-a. The 421-a program does allow the affordable units to be in a separate building, which is also permitted by MIH, but the affordable and market-rate building must be located on the same zoning lot.

Another consideration for developers in planning an affordable project is the political nature of the MIH process, which creates uncertainty as to what affordability options will be approved. MIH areas are established through the adoption of a zoning text amendment, which is approved through a public review process similar to the city’s Uniform Land Use Review Procedure (ULURP).6 The text amendment may apply the MIH requirements to a single site, or to all the properties within a designated area. The City Planning Commission and City Council will choose the applicable MIH option as part of the land use approval. Developers may be asked to agree to affordability or income levels through the political process that do not correspond to the MIH or 421-a standards, since community boards sometimes request a higher percentage of affordable units and/or lower income levels than prescribed by MIH.

Each of these considerations indicates the need for careful planning in developing a project that will take advantage of both MIH and 421-a. In addition, it should be noted that there are many other requirements of the 421-a and MIH programs that must be coordinated in any affordable housing project, such as unit size, bedroom mix, and unit distribution requirements. Please contact the lawyers in the Land Use team at Kramer Levin to discuss the details of your project.