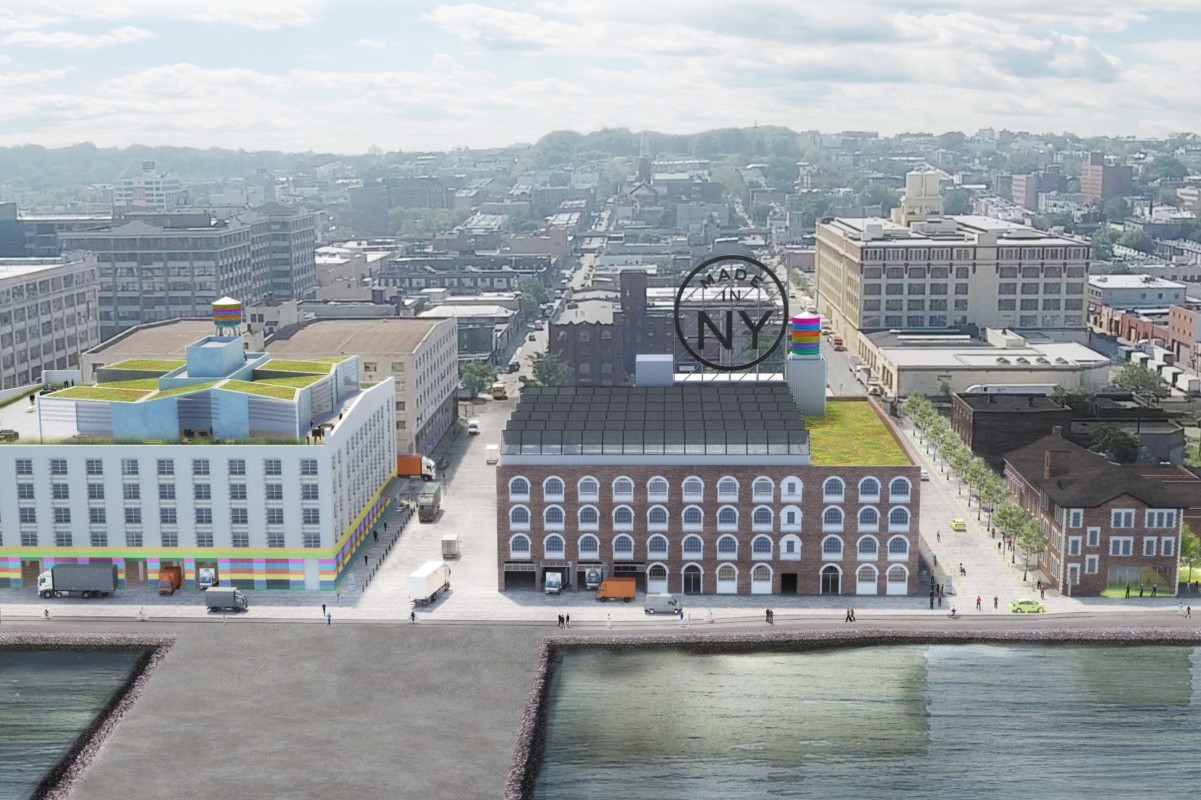 Mayor Bill de Blasio, joined by leaders from New York City’s fashion, film and television industries, announced a $136 million commitment to a ‘Made in New York’ Campus at Bush Terminal.

The Sunset Park buildings will be transformed into a hub for garment manufacturing and film and television production, and support more than 1,500 permanent jobs.

The build out of modern garment manufacturing space, sound stages, and other campus improvements is expected to create more than 800 construction jobs.

As part of his 2017 State of the City address, Mayor de Blasio is committing to adding 100,000 good-paying jobs, including these Sunset Park jobs, within the next decade – and including adding 40,000 jobs in the next four years.

“Good paying jobs are the bedrock of strong city. We will continue to invest in the ‘Made In New York’ brand and in New Yorkers. This is still your city, today and tomorrow,” said Mayor Bill de Blasio.

Deputy Mayor for Housing and Economic Development Alicia Glen said, “We have used our ‘Made in NY’ brand to grow fashion and film companies, and today, we’re committing some of our most important real estate assets to support them as well. These industries support hundreds of thousands of families with good wages, and they need affordable and modern space to grow.

“The ‘Made in NY’ Campus represents the collision of our creative economy and advanced manufacturing. This is going to be a 21st century working waterfront that keeps our city the capital of film and fashion.”

With average salaries of $57,000 in the fashion industry and $53,000 in the film production industry, the city said local hiring and workforce training will ensure Sunset Park residents have access to the campus’ new jobs.

CUNY’s Fashion Institute of Technology will launch two courses for makers at nearby Brooklyn Army Terminal, which will be integrated into the overall project.

The Made in NY Campus, anticipated to open in 2020, aims to synergize creative manufacturing uses and provide affordable, industrial facilities for garment manufacturing, film and media production, and related services and industries.

The fashion industry already represents 182,000 jobs, five percent of the city’s job force. The film industry is home to 130,000 jobs in the city. Both sectors face a shortage of stable, affordable space necessary for companies to grow and add jobs. By investing at Bush, the City will help fashion designers increase their local manufacturing, and help increase to City’s capacity to attract new film and television productions.

Film and television production is one of the fastest growing, high-wage sectors in New York City. The city had 336 feature films shot last year, up 40 percent from the year prior, and also saw a 13 percent growth in episodic TV shows. That growth has left many firms struggling to find new and affordable production space.

The Made in NY campus will provide high-ceiling sound stages and support space for ancillary uses for film and television production, video and photo shoots, and emerging media sectors such as Augmented Reality and Virtual Reality technologies facilities.

Similarly, while garment production manufacturing comprises 30 percent of the city’s manufacturing jobs, the industry has faced decades of global economic pressures that have forced companies to look overseas for production.

The Made in NY garment manufacturing hub will provide small white-box spaces, ranging from 2,000 to 20,000 square feet, to companies working in patternmaking, marking and grading, cutting and sewing, and sample making.

The hub will include shared services and related uses to support the garment firms and the larger Sunset Park garment cluster, such as shared logistics and common services like photography and educational support. The hub will support between 25 and 35 garment manufacturing tenants.

To help anchor the Made in NY campus, the City will also be seeking a tenant to provide both food retail and food manufacturing in the 7,500 s/f Café Building. This new tenant will provide affordable food and beverage options to campus businesses, Bush Terminal Piers Park visitors, and the larger Sunset Park community.

NYCEDC Sunset Park District is comprised of three campuses – The Brooklyn Army Terminal, The Made in NY Campus at Bush Terminal and the Brooklyn Wholesale Meat Market. It is currently 4.2 million square feet of leasable space and operates at 93 percent capacity and is home to more than 165 companies that provide approximately 5,000 permanent jobs.

Simone Development pushing for biotech boom in the Bronx