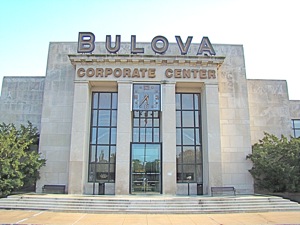 Bulova HQ up for sale

Eastern Consolidated has been retained as the exclusive agent to market for sale Bulova’s New York headquarters at One Bulova Avenue, also known as 26-15 Brooklyn-Queens Expressway, in Woodside, Queens for $30 million.

The famous watch and clock maker is moving its operation out of the building and has leased the 33,000 s/f 29th floor of the Empire State Building.

The existing 93,000-square-foot corporate headquarters in Queens is comprised of a 55,000-square-foot warehouse and a 38,000-square-foot, two-story office building with a retail component. The campus also includes two surface parking lots, which hold more than 200 cars.

The property includes significant unused development rights of ±60,000 square feet which can be utilized to expand the existing structure or redevelop the entire 151,000 s/f development site.

“This three-acre campus with ample parking is a rare offering and a great opportunity for development as-of-right into a versatile corporate compound.”

Added Schechtman: “The environmentally clean campus has an unparalleled location, just steps away from the Brooklyn-Queens Expressway and a five-minute drive from LaGuardia Airport.”

The warehouse building features 16-foot ceilings, a factory/repair center, and a loading area with seven loading docks and 13.6-foot garage doors. The office building is comprised of open workstations, perimeter office spaces, and a retail component.