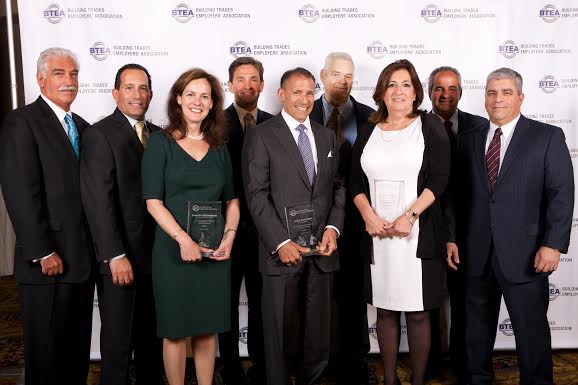 The annual event recognizes the leadership, commitment and vision of outstanding industry professionals and was attended by over 750 guests.

Named for the late construction industry visionary, Alfred G. Gerosa, the dinner honored three eminent men and women for their leadership and service to the industry over the course of their distinguished careers.

Greenberger has over 20 years experience in urban planning and development, design, construction and operations management.
At New York-Presbyterian Hospital she oversees the hospital’s Offices of Corporate Engineering, Facilities Operations, Facilities Design and Construction and Capital Asset Planning and Development.

Lorraine Grillo began her career at the New York City School Construction Authority over 18 years ago as a Community Relations specialist for the borough of Queens.

David Rothstein, who has over 26 years of New York City building experience, manages construction activities from conception to completion for Extell Development projects in all locations.

A prior principal and founder of Pierpont Group, Rothstein was also formerly a principal at Millennium Partners and served as director of construction for General Atlantic Realty Corporation.