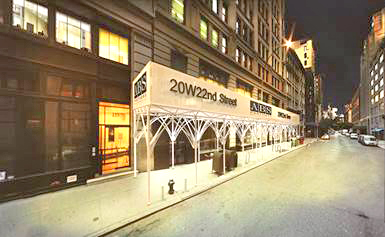 The firm, which manages upwards of eight million square feet of commercial space in New York City, is partnering with Urban Umbrella, a specialty scaffolding firm based in Toronto, to install unique scaffolding at 20 West 22nd Street, a 16-story building in Manhattan’s Flatiron District.

Made of recycled steel and translucent plastic panels, the stylish scaffolding resembles an unfurling umbrella lit by eco-friendly led lights.

“At ABS, we always strive to be ahead of the curve when it comes to innovation and real estate technology.

Urban Umbrella is on the cutting edge of Scaffolding and we knew that a partnership produce positive results for our retail tenants,” said Robert Finkelstein, an executive managing director at ABS Partners Real Estate.

“Urban Umbrella puts an artistic twist on traditional sidewalk sheds, which are often an eyesore. The Urban Umbrella that we’re installing at 20 West 22nd Street will be eye-catching and is evocative of ABS’ desire to provide our tenants with superior quality when it comes to building safety and aesthetics.”

Gregg Schenker, president and Co-Managing Partner of ABS, continued: “The ABS Partners Construction Management Team is delighted to have access to this new product that Urban Umbrella has developed, which carefully balances the need for safety coupled with a user-friendly experience for our tenants, visitors, pedestrians and all community stakeholders.

“ Scaffolding has been a blight on NYC streets and this product is ideal to solve the complications inherent with the need to maintain safe areas adjacent to construction sites, particularly those where construction will endure for an extended period of time, and simultaneously take into account the consideration of the people using the areas in and around these sites.”

“There are more than 10,000 scaffolding bridges in New York City that are hindering foot traffic and affecting the amount of business that companies get while hidden behind construction work. In New York, there has never been an alternative to these unattractive hunter green scaffolding bridges until now,” said Benjamin Krall, co-founder of Urban Umbrella.

“After finding success in major cities like Toronto and Vancouver, we were able to bring a more scalable and affordable version of Urban Umbrella to New York City this year. 20 West 22nd Street will be our most prominent installation this fall and we expect more New York City landlords and developers to follow in ABS’ footsteps.”