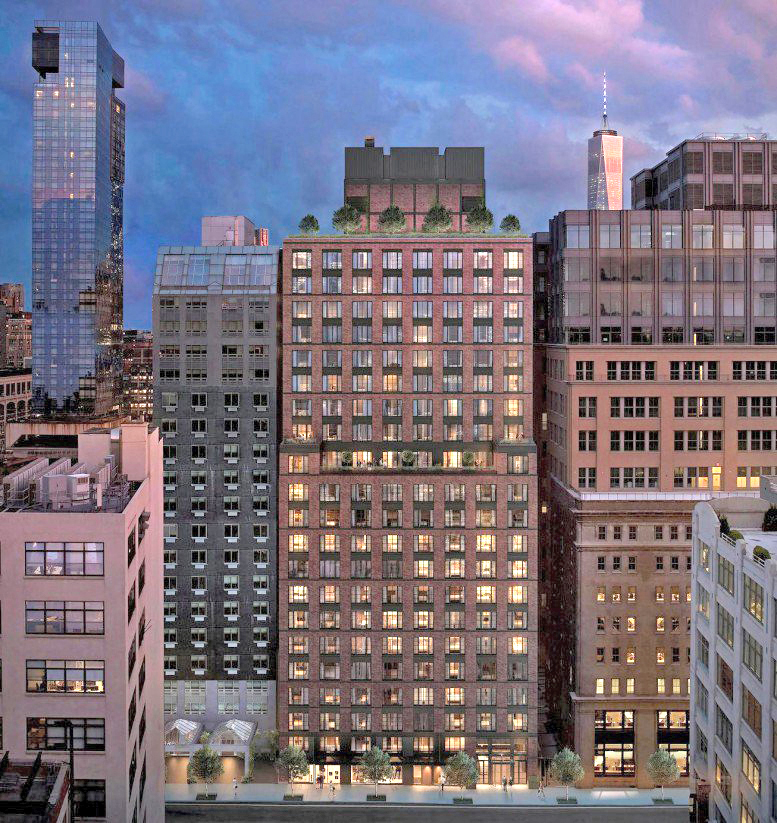 Before Hudson Square was rezoned to allow residential development in 2013, developer Extell owned a property at 68 Charlton, which was originally slated to be a hotel.

Eight years later, holding onto the property paid off: Extell just topped out 70 Charlton Street, a new condo building that is the first residential development in the changing neighborhood since the zoning change.

“Being the first one out of the box is a real opportunity for buyers to get in early and take advantage of competitive pricing,” said Tony Mannarino, executive vice president of development for Extell.
“The neighborhood will only get better over time as more residential is built and more retail comes into the area.”

The area known as Hudson Square sits at the nexus of Soho, Tribeca, and Greenwich Village. Once known as the printing district, the neighborhood is growing into a bustling center of retail and residential.
Among ground-floor retail, the neighborhood has had a high amount of turnover since 2013 among bars and restaurants, leading to new places opening up and increasing options for eating and drinking for residents and visitors.

According to the Hudson Square BID, the neighborhood had one of the lowest commercial vacancy rates in Manhattan at the end of last year, dropping to five percent.

The BID reported that 26 percent of tenants in Hudson Square are in the media/communications industry, 13 percent are tech, 11 percent are architects and engineers, and eight percent are in the arts and design fields.

The building itself will have 2,800 s/f of ground-floor retail, which has yet to be announced.
“The site is situated in the center of some of the most vibrant neighborhoods in the city and we felt like it was a real opportunity to create a really exciting, interesting development in Hudson Square,” said Mannarino.

In June, the building held a soft sales launch to a waiting list of more than 600 people, before officially launching sales this fall. Prices for the units range from $1,545,000 to $7,130,000. Penthouse residences range from $4,950,000 to $11,950,000. Closings will start at the end of 2016.
In the design of 70 Charlton, architectural firm Beyer Blinder Belle sought to reflect the history and architectural style of the neighborhood, drawing on the industrial heritage of the area.

“They did a good job of capturing the essence of the neighborhood,” said Mannarino.

With building amenities becoming increasingly important in drawing buyers, Extell jumped right into the race, including an indoor saltwater pool, steam rooms and men and women’s locker rooms, and a resident’s lounge with catering kitchen at 70 Charlton.

The 22-story building, split into two wings that connect through an enclosed breezeway, offers 92 units, ranging from one to four bedrooms. The apartments look out onto a landscaped courtyard that features a green wall, birch tree arbor, staggered boxwood garden, water feature and integrated seating, and an outdoor sports court.

Inside the apartments, interiors were designed by Workshop APD and feature finishes like grey-stained cerused oak flooring, custom trim details, Miele appliances, Dornbracht fittings and washer and dryer in every unit.

“There has been a great deal of interest in the building since launching sales,” said Elida Jacobsen Justo of Extell, who is the director of sales for 70 Charlton.

“The Hudson Square/West Soho area is really an in-demand location, and people have been waiting for a project of this quality. The two-bedroom units have been of particular interest given their size, layouts and price; there’s nothing comparable to them on the market right now.”

Other new developments in the area include Stellar Management’s project combining the Butterick Building at 161 Avenue of the Americas with 233 Spring Street, to form a 750,000 s/f commercial building, Related Companies’ 261 Hudson Street, a 12-story 201-unit residential building, The tommie hotel, which is set to open in 2016, will have a restaurant, bar and courtyard, as well as a rooftop and 24-hour general store, and Connection Partners’ renovation of 286 Spring Street.

HAVE YOU HEARD: Corcoran agents host more than 100 for breakfast, Muhammad Ali’s former home up for sale