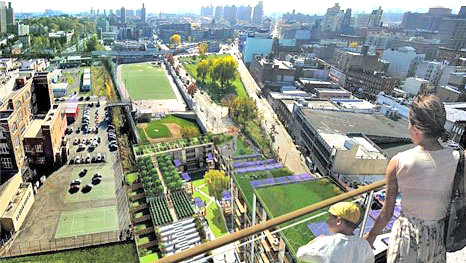 In the past decade, the Bronx has been committed to leading the way in development of affordable multifamily green housing.
Consider, for example, Arbor House, state-of-the-art, affordable green housing located at 770 East 166th Street.

The project’s cost of $37.7 million was a part of Mayor Bloomberg’s Housing Marketplace Plan to finance 165,000 affordable housing units for half a million New Yorkers by the end of 2014.
Among Arbor House’s green features are direct drive elevators that use considerably less horsepower than conventional elevators without requiring machine rooms or a/c;

The increase in green architecture is not just a win on two sides, but on three.
In addition to environmental and economic improvements such as greatly reduced energy usage, lower cost for energy, the longer life and lower maintenance of LED lighting, etc., green housing can also influence social improvements.
Via Verde/The Green Way in the Bronx is a trendsetting example. A co-development of Phipps Houses and Jonathan Rose Companies in partnership with Dattner Architect and Grimshaw. the mixed-use project is the winning response to the New Housing New York Legacy Competition and provides 151 low-income rental apartments and 71 middle-income co-ops.

Given the crime rates throughout the area’s history, the South Bronx may be a tough neighborhood to live in, but developments such as Via Verde are helping residents build a healthier, safer community.

The most substantial improvement made with the construction of Via Verde compared to most buildings in the Bronx is the level of environmental sustainability, with a LEED certification Gold rating. Green amenities include solar shading devices, south facing solar panels, a highly thermally efficient prefabricated rain screen façade and green roofs that provide fresh produce to residents, while combating the heat-island effect, and compost bins.

Via Verde has social as well as environmental and economic benefits. The housing complex “…is the result of the commitment of a wide range of leaders to address the intersections of poverty, health and the environment…” said Jonathan Rose.
The series of green roofs that cascade down provide residents with a community “garden club,” which gives people an opportunity, children specifically, to see food grow and understand the alternatives to healthy eating in comparison to fast food.

The building encourages residents to improve their health. A stair prompt is used at the bottom or entrance to every staircase with the quote “burn calories, not electricity.”

While the economic and environmental improvements are groundbreaking, the social improvement aspects of Via Verde provide profound inspiration for future green buildings.

The future of green development in lower income areas relies heavily on the ability to fund energy retrofits.

That is why Bronx borough president Ruben Diaz Jr. is overseeing the Bronx program funded with $2.5 million to retrofit apartment buildings with 50 or more units and will eventually include smaller buildings.
Retrofits bring direct energy savings to those most in need; help avert future rent increases; improve conditions in affordable properties; and increase economic activity from increased spending opportunity.

In the Bronx, a large percentage of multifamily residential buildings were built before 1980, which account for 70 percent of building greenhouse gas emissions. The program is a major opportunity to capture energy savings through the implementation of retrofits.

All progress often starts with a simple concept. In the case of affordable green building in low income neighborhoods, those concepts include not only reduced costs, but also the opportunity to use housing as a stimulus for healthier, safer, more community-involved living.