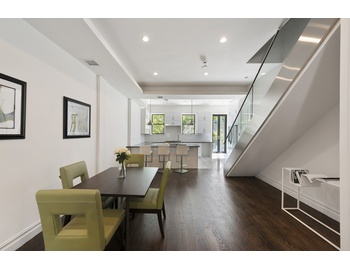 Moving in to a new home can be an exciting time. It’s not uncommon to fall in love with features, furnishings and quirks.

But after a short amount of time has passed, and you’ve had an opportunity to fully absorb your new surroundings, doubt can begin to creep in.

Details like paint scheme, imperfections in the floor, and other minor inconveniences might make you wonder if you did, in fact, make the right decision.

If it’s a rental, you can move on and try and find something more to your liking when your lease ends. But when you’ve gone ahead and purchased a home, reconsidering your major life decision can be a bit unnerving.

“I think we are on the tip of the spear of the sharing economy,” Walid Romaya, founder and CEO of RealStir told Brokers Weekly while discussing his company’s new take on home buying.

“The sharing economy has been going on now for the last two, three, four years. It’s become more mainstream.”

Romaya pointed to companies like Uber and Airbnb and said that he felt the world of real estate could take a cue from their innovations.

“We’re basically just taking that concept and extending it into residential real estate and, potentially, even commercial real estate down the road,” said Romaya.

The company — which has won $3.5 in seed funding — bills itself as a social real estate marketplace empowering consumers and real estate professionals through local knowledge and easy real-time communication.

RealStir is currently in discussions to add RealeFlow’s 30,000 real estate investors to its database — a development considered important because demand currently exceeds supply for try Before You Buy homes.

“Why is that people can test drive everything now except a home?”

RealStir, which is based in California but posts listings throughout the United States, is on the verge of rolling out a trial option that will allow potential home buyers to spend a few days living in a residence before committing to purchasing it.

The idea came to him after those eyeing residential developments that he had worked on in the past asked if they could temporarily stay in the furnished models used to sell the new homes.

While those test drives never materialized, Romaya believes that method of buying is the future.

Shoppers who use RealStir can chose the amount of time that they wish to spend in the home and work out a specific arrangement with the buyer themselves, while the company collects a nominal transaction fee.
“Some people — because of the commute — they want to stay there during the week to see how traffic is and noise level and so forth,” said Marina Tringali, head of marketing at RealStir.

Others may want to take a weekend to enjoy their perspective new digs.

“It’s not Airbnb because at the end of the day they want to sell a home,” Tringali said.

She added that whatever price per night that the seller and potential buyer works out is strictly to help cover the cost of temporarily furnishing a vacant space or to pay for a hotel so that the current inhabitants can leave.

“The buyer wants to buy their dream home, the seller wants to sell their home,” she continued.

Tringali also pointed out that while buyers are indeed searching for the perfect fit, they may not be as ready as they think they are to make such a major purchase.

“We offer a lot of services to agents as well as consumers,” she said.

“We give (home shoppers) anonymous chats that gives them the opportunity to speak to agents without getting any phone calls or texts.”

This allows visitors to the website to easily inquire about properties that pique their interest without being flooded with emails and calls from brokers who want an opportunity to foster a sale. It aligns with the test drive to help prevent potential home buyers from feeling rushed or pressured
But the anonymity is a plus for brokers as well.

“They don’t have to invest time on people who aren’t ready to buy or aren’t qualified,” said Tringali.
If a customer is really serious, they can move forward and then brokers will have access to warmer leads.

Currently, the try before you buy option has yet to be fully exercised, but requests have been filed with the company. While it is not official yet, both Romaya and Tringali believe that the first ever home test-drive will occur within the next week or so at a property in the Greater New York area.

“The process has already started, it just takes a little bit of time,” said Tringali, who mentioned that they are currently waiting on the seller’s final okay.

Some local market experts have expressed doubts about the system taking off in city’s such as New York.
Brown Harris Stevens broker Heather Stein told Forbes magazine: “Due to the nature of housing in New York City, which is primarily co-operatives and condos with strict approval guidelines, this concept would seem virtually impossible to implement.

“This is especially true as building boards tightened rules with the increase in popularity of Airbnb.
“This may be easier with homes where one party makes the approval decision with no management, co-op or condo board involved, but of course an owner would still need to check on liability issues.ˮ