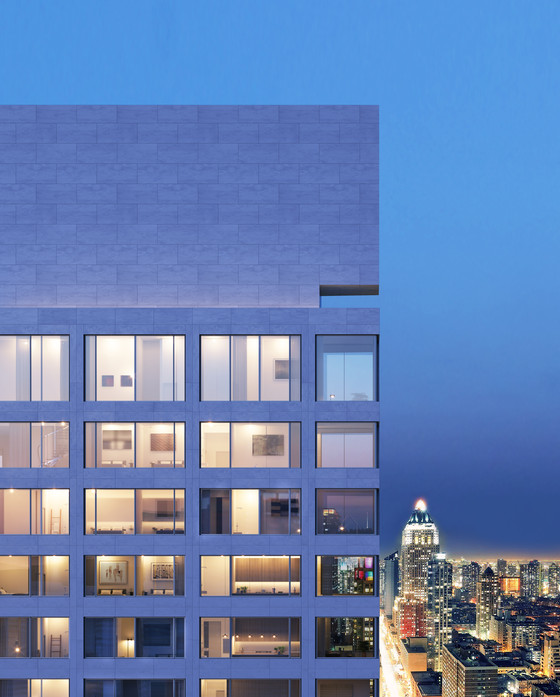 Developers Sumaida + Khurana and LENY have closed on their $65 million acquisition and planned demolition and redevelopment of 611 West 56th Street.

The transaction, which closed on September 20, 2017, will include the demolition of the vacant commercial building currently on the West Side site and the subsequent development of a 35-story, 173,163 s/f 80-unit ultra-luxury residential condominium with retail components (rendering above).

The planned development has been designed by the Pritzker Prize-winning architect, Alvaro Siza, and will be his first project in the United States.

Featuring approximately 80 apartments ranging from one to four bedrooms and penthouses, the development will include a suite of amenities, such as private terraces, a roof garden and sun deck and fitness center.

The developers secured a $36 million bridge loan from Emerald Creek Capital for the project, the Commercial Observer reported.

Sumaida + Khurana and LENY bought the property from super market mogul and one-time mayoral candidate John Catsimatidis who used as the corporate headquarters of his Gristedes chain.

“Our clients have planned a visionary development on the site, and we are proud to accompany them on this journey,” said Schwartz.

Hunton & Williams previously represented the joint venture in its acquisition of development rights to be used in connection with the project.

The HFF team marketed the property in connection with bidding procedures approved by the United States Bankruptcy Court for the Southern District of New York in the Chapter 11 case of AC I Toms River LLC, which entity was represented by A. Mitchell Greene, Esq. of the law firm of Robinson Brog Leinwand Greene Genovese & Gluck P.C.

The center was built in 1987 and has a pad site for future development.  Commons at Hooper is situated on 14.63 acres at 1350 Hooper Avenue, a major retail corridor in Ocean County with an average daily traffic volume of approximately 40,000 vehicles per day.  An estimated 61,377 residents earning an average annual income of more than $90,000 live within three miles of the center.

“The value-add opportunities in well-located retail markets in the Garden State are in very high demand these days,” Cruz said. “This deal has a significant amount of upside in the leasing and potential repositioning.”

Cushman & Wakefield has been appointed as the exclusive agent for the sale of a waterfront residential development site, at 11-35 31st Drive in Astoria, Queens for an asking price of $10.6 million.

“This pocket of Astoria was in need of additional public transportation, which has now finally come to fruition with the opening of the Astoria Ferry Terminal,” said Preuss.

“Within the first week, there were roughly 28,000 riders, which was a greater turnout than originally expected. This paired with the opening of the Cornell Tech Campus on Roosevelt Island will increase foot traffic and demand for residential housing in this immediate area.”

The lot is estimated at 9,850 s/f and features approximately 98 feet of frontage on 31st Drive. The property sits in an R7A/R5B zone which allows for a maximum 45,310 approx. buildable square feet for residential development with inclusionary housing.

Acquired through a joint venture in which BRT has an 80 percent equity interest, the deal includes $21.5 million of mortgage debt. The debt is non-recourse to BRT, carries an interest rate of 4.19 percent, is interest-only for five years and matures in 2027.

“We are very excited about our most recent acquisition. Jackson Square is a unique, value-add repositioning opportunity for BRT. The property is ideally located, proximate to the state of Florida capitol building, Florida State University and the Tallahassee Memorial Hospital, providing a number of demand drivers for rental housing,” said Jeffrey A. Gould, President and Chief Executive Officer.

“Our plans to renovate the property, which was only minimally impacted by Hurricane Irma, should provide compelling returns for our stockholders.”

The facility is currently leased and occupied by FedEx Ground for a 10-year term. Terms of the transaction were not disclosed.

The property is a 248,370 s/f distribution center on 43 acres of land, 60 miles from New York City, and located just off Interstate 84 and minutes from Interstate 87 and Stewart Airport.

Paul Cooper, CEO of GTJ, commented, “We are thrilled to announce our acquisition of this brand-new building and are delighted to be working again with Fed Ex Ground. Orange County is one of the leaders in economic and residential growth in the Northeast, becoming a major distribution and logistics hub over the last decade.  We are excited to add this property to our growing portfolio.”

Soxland will relocate their offices and showroom from 7 West 36th Street to 5,500 s/f of the floor. The remaining portion is leased to Sher Institutes for Reproductive Medicine.

The seller, Thomas Tsai of Titanium Marketing, purchased the floor in 2006 for $4.3 million.

425 Fifth Avenue is a 54-story, 178-unit luxury building constructed in 2003 by RFR Holdings. The six-floor base of the building is office and retail condos.

The buyer and seller were represented by Michael Rudder and Michael Heller from Rudder Property Group.

“Purchasing the office condo floor in 2006 was an excellent decision by Mr. Tsai. Had he signed a 10 year lease, he would have spent several million dollars on rent with nothing to show for it upon the expiration of the lease,” said Heller.

“Instead he made the prudent decision to purchase which was ultimately cheaper than leasing, plus he made a healthy profit on the appreciation of his real estate.”