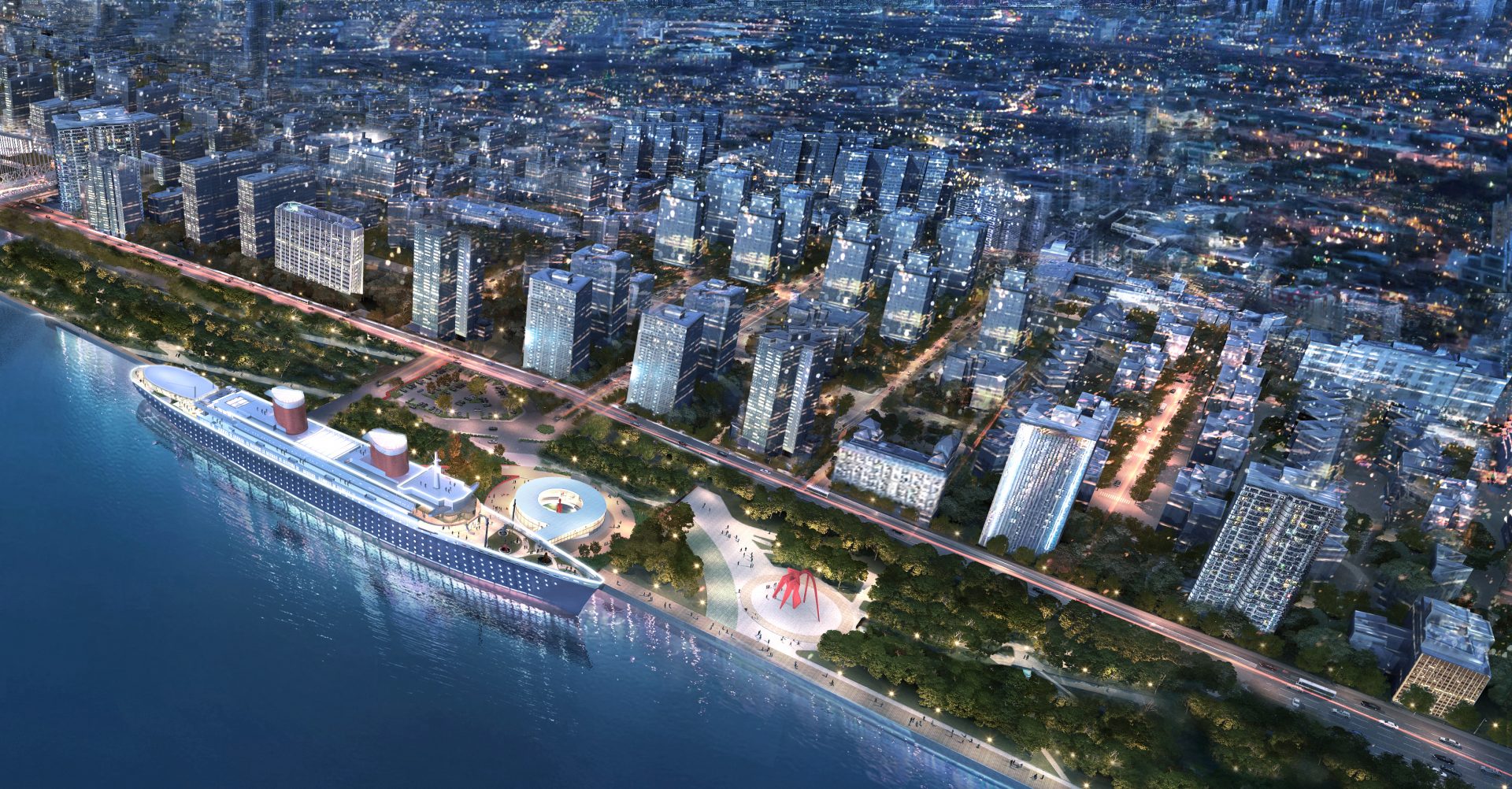 RXR Realty is looking for a partner who’ll get on board with a massive effor to restore the legendary ocean liner, the SS United States.

RXR, in partnership with the SS United States Conservancy, plans to restore and redevelop the iconic ocean liner.

With its maiden voyage in 1952, the SS United States became the fastest ocean liner to ever cross the Atlantic, and at 100 feet longer than the RMS Titanic, the largest ever entirely made in America.

As part of RXR’s plan, the vessel will be repurposed as a permanently-moored floating structure anchored by a hotel program and a collection of hospitality and cultural spaces in the 600,000 s/f available for development.

The offerings would include a museum honoring the ship’s history and exploring mid-century design, art and innovation.

According to RXR, the venture would create over 1,000 jobs, generate new direct and indirect economic activity, and activate the waterfront at its destination.

“The SSUS is an iconic piece of American engineering and design and we’re committed to finding a permanent home and restoring this one-of-a-kind luxury ocean liner into a vibrant, mixed-use destination,” said Scott Rechler, Chairman and CEO of RXR Realty.

Currently docked in Philadelphia, RXR is in search of a permanent home for the SS United States and is requesting expressions of interest from a number of major US waterfront cities with the intent of starting a conversation about how the project can be a major driver of economic activity through the creation of a new, contemporary centerpiece for their waterfronts.

RXR has a reputation for adapting and updating iconic assets for the 21st century tenant. Their New York City portfolio alone includes the Helmsley Building, 75 Rockefeller Plaza, the Starrett-Lehigh Building, and the massive Pier 57 on the west side, which will house Google offices, City Winery, and rooftop screenings for the Tribeca Film Festival.

In addition, RXR works closely with municipalities on large-scale projects, including their status as master developer for the City of New Rochelle, their partnership with JetBlue on a new terminal at JFK Airport, and their redevelopment of the Nassau Coliseum on Long Island.

For the SS United States, RXR has already assembled an architectural and engineering team that includes Perkins Eastman Architects, HLW, and Gibbs & Cox.

Gibbs & Cox is the naval architect who originally designed the vessel, while an HLW partner on the team remembers his own SSUS voyage as a six-year-old.

The team was selected through a two-part design competition, which began in 2018 with an initial targeted request for expressions of interest to identify high-potential design concepts and teams.

A shortlist of teams then completed a request for proposals phase, which included programming and design concepts. “The SS United States has waited a long time for this opportunity,” said Susan Gibbs, President of the SS United States Conservancy, which owns and cares for the vessel.

“RXR’s outstanding team understands the historic importance and economic potential of this enduring symbol of national pride and innovation. We will continue to work closely with them as they seek to secure a permanent home for America’s Flagship. The Conservancy is committed to delivering an extraordinary museum and visitor experience to complement RXR’s dynamic mixed-use program.”

At 990 ft. ong, the SSUS is the equivalent of the Chrysler Building laid on its side.

Once the pinnacle of American design, technological innovation and luxury, it had a top-secret secondary identity as the world’s fastest troop transport ship, designed as part of a Cold War Pentagon program.

The ship hosted more than a million passengers during her service career including four US Presidents, celebrities, and legions of tourists.

NYCHA puts spending, contract details online for all to see