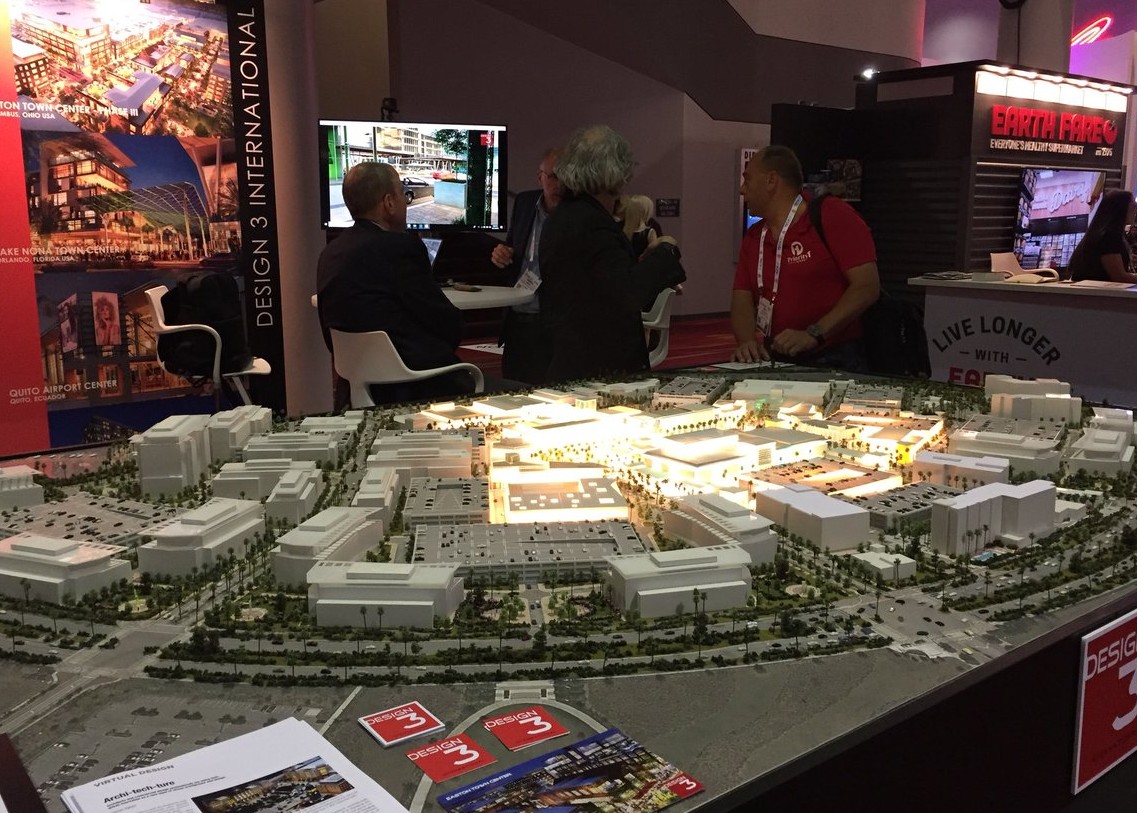 LAS VEGAS: After years of industry uncertainty, the future is starting to come into view for the nation’s retail experts. It’s one defined by technology, customer service and personalization.

With a better sense of what lies ahead and at least an inkling of how to prepare for it, the real estate community has been relatively optimistic at this week’s ICSC conference in Las Vegas.

“The fact that we’re all here shows that retail is far from dead,” Jedd Nero, head of Avison Young’s New York City retail services, said. “These are new beginnings, very exciting times. It’s like Winston Churchill, his line is that ‘This is not the end, not even the beginning of the end, but perhaps the end of the beginning,’ so that pretty much says it.”

On the convention floor, it’s clear that the landscape has shifted. The food and beverage contingent is strong, experiential elements like “Liquid Fireworks” fountain pieces are displayed prominently and security robots roll around filling attendees with laughter — or, perhaps, a sense of dread.

While artificial intelligence, virtual reality and smart spaces are among the more visible industry changes, there are also more subtle evolutions taking shape.

Tenants and landlord are working more collaboratively and there’s an openness to retailers that don’t sell anything at all, like KidZania, a mall-based activity center where children can learn about different professions while their parents shop, or the myriad health and wellness operations that have begun populating retail spaces.

“Even the top shopping centers are now looking for these alternate uses,” said Ira Kerner, first vice president of CBRE’s retail team in New Jersey. “Five years ago, 10 years ago, an owner of a B or C shopping center would say, ‘Okay, I’ll do an Urgent Care,’ but now the best shopping centers, even new centers are looking at alternate uses that serve their communities better.”
Kerner said he’s felt more optimism at this year’s conference than in years past “because people have embraced the changes in retail and new concepts.”

Garrick Brown, Cushman & Wakefield’s vice president of retail intelligence, said his goal was not to spend all his money at the tables, according to his wife, who kept his ATM card. But on the business side, Brown also said the retail market is beginning to look more upbeat.

“This year, what I’m really getting an interesting vibe from so far was the feedback of the players in the market,” Brown said. “Investors are jacked up and very optimistic mainly because they see the perception of retail becoming worse than the reality and that creates all sorts of buying opportunities.”

And for Mitzi Flexer, Cushman & Wakefield’s director of retail services in the outer boroughs, the value is in finally meeting her clients face-to-face.“The funny thing about Vegas is you’ll have a tenant that represents a brand and then you’ll see they look exactly like their brand,” Flexer said. “As a broker, anyone can find a space, but you have to know where they fit, you have to know what their style is. When you see them face-to-face, you get their style and you know who they are.”

Similar to Flexer, some New Yorkers visit Vegas just to network and get a better vibe for their colleagues out West.

“I’m excited to be here and I’m looking forward to seeing what the mood is around the country,” David Green, Colliers International’s vice chairman said. “Most of my business is in the New York metro area, so I don’t get a feel for anywhere else.

Green said that within 15 minutes of walking around the ICSC convention, he’ll understand how the market is doing just from the vibes.

But Selman Yalcin, president of real estate networking company RED in NYC, prefers the events at night to the convention center. Yalcin, who was looking for more sponsors and attendees outside of New York, said Vegas always provided a good atmosphere for meeting new people, especially at the nightclubs.

“There’s always a good energy here and people are always excited to attend the convention and the parties,” Yalcin said. “It’s always good because they’re more comfortable out in Vegas than in New York.”

David Firestein, founder of Northeast Atlantic Real Estate Services and a partner with the Shopping Center Group, said his takeaway from the conference is that despite the much-publicized turmoil in the sector, retail will survive.

“The market is going through a major adjustment right now, but it’ll be fine,” he said. “I’ve been in this a long time and I can tell you, it’ll be just fine.”
Firestein, a former chairman of ICSC’s New York program committee and the leading broker for Starbucks in the city, said he’s seen signs of progress in Manhattan’s hard-hit high street markets, such as Puma signing a lease for 24,000 s/f on Fifth Avenue.

While landing a major tenant on one of the city’s most high-profile retail corridors should instill confidence in the market at large, Firestein said he’s also seen strong tenants moving into secondary markets where rents are a little cheaper and landlords are offering more flexibility.

“NoLita, is an example of a place that’s receiving these tenants because it’s a little more affordable but still close by,” he said. “Things have shifted because none of the food guys can afford to be in these high street locations.”

Gary Albrecht a retail specialist with the law firm Cole Schotz, said the biggest change he’s picked up on this year is the openness for collaboration, even from the largest, most removed owners.

“It’s not that we feel that retail is dying, but we’re seeing big changes,” he said. “For example, we’re seeing major REITs changing the way they deal with their retail assets, they’re starting to treat them more like partners, working together to help them be more competitive.”

Nero said retailers, landlords and brokers have reached an understanding of a few key principles in today’s market: businesses don’t need to occupy a large space to make a strong impression, experience is everything, the consumer is key and technology is the key to it all.

“The retailers that got complacent were in for a rude awakening,” he said. “Now you’re either a part of the change or you’re a casualty of it.

“Those that do it right are going to flourish and have incredible business opportunities, it’s like a blank canvas to them,” he added. “Retailers today have the opportunity to set the tone for others to follow and that’s a beautiful thing.”