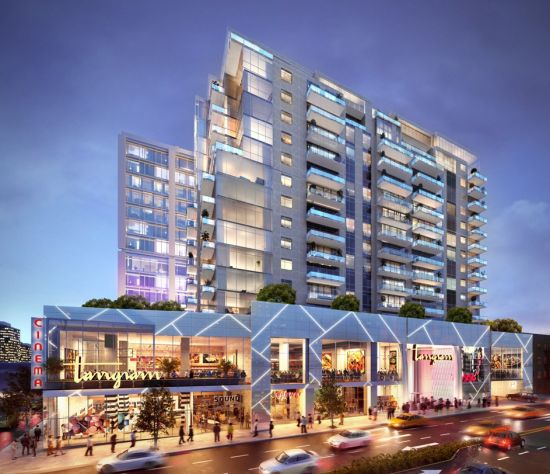 F&T Group and SCG America announced that American cinematic powerhouse Regal – operator of the second-largest theatre circuit in the United States – has signed a lease to occupy its 34,000 s/f multiplex within Tangram, the new 1.2 million-square-foot, mixed-use development in Flushing, Queens.

Regal will be the first theatre to open in Downtown Flushing in 30 years.
Tangram’s seven-screen theatre will feature the latest in groundbreaking cinema technology including 4DX, which allows the audience to connect with movies through motion vibration, and environmental effects such as wind and rain. This will be the first 4DX location in Queens.

Currently under construction with an expected 4Q 2019 opening, Regal will take over theatre operations originally slated for South Korea-based CJ CGV, which signed a lease with the developers last year before both sides mutually agreed to part ways.

“Regal is a highly reputable company that understands the nuances of operating in a US real estate market, particularly one as complex as New York City,” stated Richard Siu of F&T Group. “Regal came to us as a qualified cinema operator with brand recognition. And, they completely understand the future of Flushing – its energy, draw and potential.”

“Tangram will be a thriving mixed-use development and our theatre will offer a whole new experience for moviegoers in Flushing,” stated Jerry Grewe, Vice President of Real Estate for Regal. “Along with a state-of-the-art theatre, we are proud to bring the truly immersive experiences of 4DX to Queens.”

The Tangram project is inspired by the traditional Chinese dissection puzzle “tangram,” which consists of seven flat pieces called tans. Tangram is elevating the draw of the neighborhood through its groundbreaking vision of cutting-edge retail, residential, office and hotel space.

In addition to the movie theater, Tangram will include more than 324 luxury residences, 48 office condos, a four-star branded lifestyle hotel, 275,000 square feet of retail space with a food hall, beer garden and high fashion shopping comprising of an array of exciting international and domestic brands.