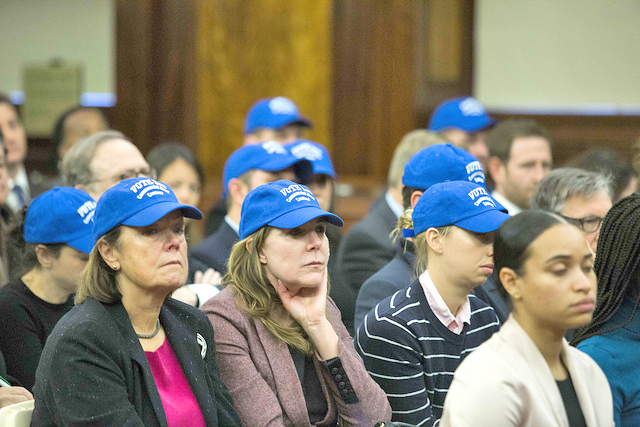 The Real Estate Board of New York and its allies came out swinging during a City Hall hearing Monday on a controversial proposal to introduce commercial rent controls.

Saying it would have a would have a “catastrophic impact” on the local economy, REBNY president John Banks said, “This bill will kill jobs, kill ingenuity, and ensure the homogenization of retail in the City of New York. It was deeply flawed 30 years ago, and it is deeply flawed today. The only survival the bill ensures is of continued vacancies.”

Intro 737, dubbed the Small Business Jobs Survival Act, SBJSA, would place a set of regulations on commercial rent in an effort by lawmakers to protect small businesses from the city’s rising rent costs. If passed, the bill would reconfigure dynamics between landlord and tenant by giving tenants the guaranteed right to renew a lease.

If in good financial standing, tenants would be given an option for a 10-year lease renewal and the right of first refusal. If a deal isn’t reached, then a decision would go to mediation and potentially arbitration the law dictates.

Some community advocacy groups have praised the measure as a major step towards resetting the balance between landlords and small businesses.

During a several hours-long, often contentious hearing, both advocates and opponents of the bill made their case.

David Eisenbach, a Columbia professor who heads a group called the Friends of the SBJSA, compared the fight for the bill’s passage to “a battle for the soul of New York. Will it be a New York of chains or a New York of Chinatown? It’s David against Goliath.”

Banks warned that if New Yorkers thought there were too many chains or vacant storefronts already, they’d be horrified if the bill was passed.

“The misperception that our members hold out for the chain tenant will become a self-fulfilling prophesy,” Banks said. “If our members know that they will be locked into a lease agreement in perpetuity, they will wait for someone whose idea is proven, and can pay, and will not be a nuisance to their residential tenants. In the interim, more storefronts will remain or become vacant,” he said.

The New York Building Congress, which has been critical of the bill, has called for the formation of a task force to study the potential effects of commercial rent regulation which would convene local business owners, industry professionals, and community leaders.

“The goals of this task force should include examining the impacts the legislation could have on New York City’s economy, as well as conducting a holistic study and assessment of small businesses, their needs, the challenges they face, and how we can assist them in succeeding,” said Congress president Carlo A. Scissura,

While supporters of the bill, which was introduced in March by Councilman Ydanis Rodriguez, argue that the law wouldn’t constitute commercial rent regulation since its doesn’t set specific thresholds for rent prices, The New York City Bar Association has contended that the passage of should be considered an over-reach by the city’s government.

The debate over the bill’s passage marks a resurgence of potential legislation to regulate commercial rent prices that bubbled up most recently in 2009.

It was the first time in REBNY history that the industry has shown up en masse at a City Hall hearing. At the annual REBNY lunch yesterday (Tuesday) Banks said, “There was no doubt that we had an impact, so much so that people were commenting on how annoyed they were that we wore blue caps to let everyone know who was in the audience, that we were there and were to be taken seriously.”

REBNY has joined a coalition of business leaders, property owners, housing advocates and home owners who have raised concerns about the impact the legislation would have on co-op buildings in which resident boards negotiate leases with on-site retail tenants.

Other members of the coalition include the NYBC, Council of New York Cooperatives and Condominiums, the Alliance for Downtown New York, the Grand Central Partnership, East Midtown Partnership and the Rent Stabilization Association.

According to a spokesperson for Councilman Rodriguez’s office, additional hearings will be held on the bill, though none are currently scheduled.

After the hearing phase has concluded it will be passed on from the Small Business Committee to the City Council for a full vote, procedures that could take months.

New retail reaching into Chinatown as next generation drives change