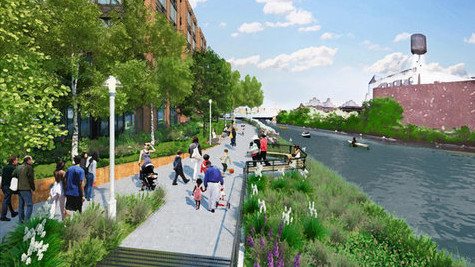 New trend in working from home, in the outer boroughs

“New York has more students than the entire population of Boston. 40 percent stay to live and work after they graduate. Brooklyn and not Manhattan is more populated,ˮ said Schwartz, who moderated a panel that included developer Toby Moskovits, founder and principal of Heritage Properties, Sara Rubenstein, Vice President and General Counsel of Simone Development Companies, Jodi Stein, Vice President of Acquisitions and Development, Lightstone, and Laura Pomerantz, Vice Chairman and Head of Strategic Accounts, Cushman and Wakefield.

According to Schwartz, “If it were its own city, Brooklyn would be the fourth largest city in the country. Brooklyn isn’t at its population peak. In 1950, Brooklyn had 150,000 more residents, so clearly it has power to grow more.ˮ

Noting that the boroughʼs population has not only grown quickly, but also grown younger, Pomerantz said, “The population between the ages of 25 and 34 has just exploded to just under 20 percent. It’s only 8.4 percent in the whole country.ˮ

Pomerantz believes the population boom has been driven by commerce and the creation of small business propelling demand for apartments and services.

“There has been a wave of independent retailers opening,ˮ added the Cushman dealmaker. “Brooklyn has become a real hub for artisanal production, high quality food, home goods and apparel.

“One telling stat; Brooklyn is now the craft liquor capital of New York and is home to at least 15 distilleries, while Buffalo follows with just five.ˮ

According to the Brooklyn Chamber of Commerce, more than three million square feet of work space is now being constructed or converted from other uses in an area from Red Hook up through Williamsburg, Bushwick and Greenpoint to the Queens border.

Toby Moskovits has joined the brick rush now meeting demand from a generation of workers who no longer wish to commute to Manhattan every day.

In 2012, her firm purchased a vacant lot on Williamsburg’s Kent Avenue with $65 million in funding from Madison Realty Capital to build the first ground up office building the area has seen in decades.

Her 400,000 s/f nine-story building at 25 Kent Ave. will cater to the growing collection of new young companies as well as, possibly, light-manufacturing firms.

Moskovits told the audience, “I had to make a lot of judgement about where to go. I could be a step or two ahead of the market. To be a developer especially in a city, as competitive as this, you have to try to crack the nut.ˮ

The industry is closely watching Moskovits’ venture as she works to secure re-zoning for manufacturing that some worry would set a bad precedent for the rest of the city. The Department of City Planning approved the application and now the alteration is going through the Uniform Land Use Review Procedure (ULURP) process. Supporters say the development will provide desperately needed commercial and industrial space.

Moskwitz told the Forum, “There is still this immense demand [for office and manufacturing space] and now they will have a place to work. ˮ

Further north, a development by Lightstone faced a similarly rocky road to fruition. The company’s Jodi Stein said, “Much like Williamsburg, we saw Gowanus and saw this as a new opportunity. It embodies live, work, play. The neighborhood already existed but it’s surrounded by four of hottest neighborhoods in the city.ˮ

Lightstone recently began leasing at 365 Bond, the first phase of a 700-unit residential project along the banks of the Gowanus Canal. The first building has 430 units and is nearly complete. The second building will have 270 units and is still under construction.

The company took over the site in 2010, after the original developer, Toll Brothers, walked away following the economic collapse in 2008. Toll Brothers won rezoning of the site for condos and signed a contract, but had never closed.

Undeterred by the polluted waterway, Stein said Lightstone was confident that the site would be successful as a rental.

“Today, tenants moving in to 365 Bond, they’re living, working and playing in Gowanus. There’s a WeWork coming in and new businesses are popping up as these industrial space are made hip and cool.

“We have the neighboring restaurants giving cooking classes, spin classes, yoga. The space we provide helps businesses in the area. Live, work, play is really what 365 Bond is all about.  It has to be the mantra for these projects. Who wants to commute to work? It’s the way we’re going.ˮ

Rubenstein said Simone recently completed the first “bed-less hospital” for Montefiore in the Bronx.  “Hospitals want to be there because its an under-served area of the market. We’re reaching deeper into the borough to serve these under-served areas.

“With the office comes the retail component. It’s great to be able to do the errands you need to at lunchtime. All of those things complement the live, work, play dynamic and make it a compelling place to come.ˮ

Simone in currently in the throes of acquiring a 35-acre site in the Bronx to build another 2.5 million square feet for biotech companies and medical users.  And a new New Metro North station will be another option for people living, working and commuting in the Bronx.

Pomerantz said the growth of any community means developers have to “merchandise their space.ˮ She explained, “You have to have  a balanced approach to who retailers are and who residents are and try to match what you think the services should be.ˮ

Citing the arrival of WeWork in Brooklyn, Pomerantz said retail vacancy has been falling as, first boutiques opened up shop, and then chains such as Levi, Scotch and Soda, J. Crew, Sandro, Urban Outfitters and even Apple.

“The most important thing in development is the balance of local charm and interests that brought people there to begin with, and to try to keep that while you expand into the community. When you lose the community you lose the character. Where they work they want to play as well.ˮ

With a rise in community concerns, Schwartz questioned whether there is a way to make increased density more powerful for communities.

“The growth of our city has been based on constant turnover and getting new residents involved in the community,ˮ said Moskovits.

“If you think about how this explosion started, it’s all interconnected. The luxury condo boom started, and in each of these neighborhoods it’s important to understand you’re not coming into a vacuum. People have been living here for years, we want to work with the community. I don’t believe in gentrification. It’s the ability to create cohesiveness.ˮ

Stein recommended developers tackle any project “like it’s a campaign and start in the neighborhoods.ˮ Citing a 60 s/f lease she signed in Williamsburg in 2013, Pomerantz said, “That lease has grown to 300 s/f. You can diversify while maintaining the character. That’s part of what we have to be sensitive to, not to destroy a neighborhood but enhance it.ˮ