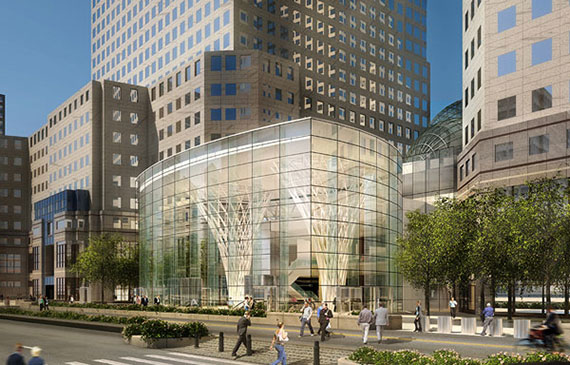 Lower Manhattan leasing has surged to highs not seen since pre-recession days in 2006, while employment rates reached 2003 levels.
That’s according to the recently-released Alliance for Downtown New York’s 2014 Year in Review report.

A slew of new retail openings helped spur more growth in Lower Manhattan as well, with the opening of Brookfield Place, and the progress of Westfield’s leasing at the World Trade Center, as well as the South Street Seaport.

The Alliance reported Lower Manhattan as having more than two million s/f of new and repositioned retail. In 2014, 76 new stores and restaurants opened in the district, increasing the number of retail offerings by nine percent from the previous year.

“We’re thrilled to see how incredibly dynamic and diverse Lower Manhattan is fast becoming. 2014 was a year to remember, with the district reshaped and reimagined in exciting and powerful ways and market growth its strongest in years,” said Jessica Lappin, president of the Alliance for Downtown New York.

“This is a transformational moment for Lower Manhattan, and it is only just beginning — 2015 is going to be another year of big openings, continued diversification in tenancy and growth.”

Retail asking rents have surged as well, jumping 17 percent from 2013 to 2014, to an average of $265, according to REBNY.
This rising value of retail helped to drive 2014’s commercial property sales in the area, especially retail condos.
A total of 13 retail condos were bought or sold in Lower Manhattan last year, reflecting more than $174 million in sales, which translates into a 120 percent increase in dollar volume over 2013 and a 79 percent increase from 2012, according to the report.

Westfield completed its purchase of the Port Authority’s stake in the World Trade Center retail complex for $800 million last year. Westfield previously paid $600 million for the other 50 percent stake in the 365,000 s/f space in 2012. The deal valued the space at more than $4,000 p/s/f.
Newcomers to the restaurant scene include Gregory’s Coffee, Bareburger, Ramen Co, Denny’s, Roast Kitchen, Little Park, El Vez and Racines.Nightlife additions included bars Cedar Local, Barleycorn, Stout, Ambrose Hall and Harbor House at Pier A. Cipriani expanded Downtown with the opening of an event venue in the Great Hall at 25 Broadway and fitness chains Blink Fitness and Retro Fitness both opened locations downtown, while Soul Cycle and Equinox opened additional locations in Lower Manhattan as well.

Major national retailers continued to migrate south to the Broadway corridor, with the opening of Urban Outfitters at 180 Braodway. Clothing retailers Zara and Gap will open later this year along lower Broadway.
And on the food scene, restaurateurs Keith McNally and Tom Colicchio both announced new eateries that will open in The Beekman Hotel in 2015.