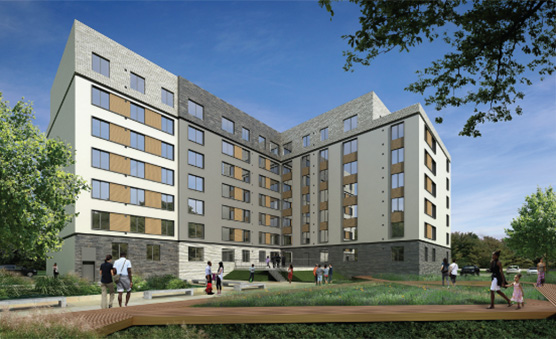 L+M Development Partners and the New York Department of Housing and Development have filed plans for the second phase of the Beach Grand Dunes housing project in Far Rockaway, Queens.

According to a permit application filed with the Department of Buildings, L+M and HPD are planning to build a 119-unit affordable housing complex at 45-19 Rockaway Beach Boulevard. The eight-story building will have 82,488 s/f of residential space and 2,961 s/f of commercial space. Planned amenities for the tower include an outdoor terrace at the second floor and a bicycle storage room.

Beach Green North, the first phase of Beach Grand Dunes project, is a 101-unit Passive House. The property, which is being developed by Triangle Equities, is nearing completion. Last December, all of the apartments in the property were dispersed through the affordable housing lottery, with rents starting at $653 per month for a studio unit.

According to a representative from HPD, the second phase of the development will be financed through the Mix & Match program, which funds new construction of mixed income multifamily projects. Half of the units in Mix & Match projects are earmarked for low-income renters earning 60 percent of the area median income. HPD expects to secure the financing by the end of the year.

Gamma chips in for golden opportunity