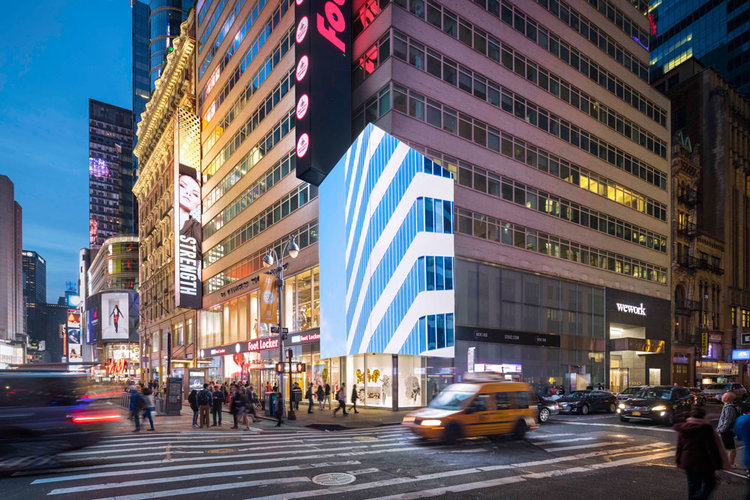 Savitt Partners announced a number of new leases and expansions at 530 Seventh Avenue, a Garment District hub for office, technology and creative media tenants. The Savitt Partners team of Brian Neugeboren and Nicole Goetz oversee leasing at the 490,000 s/f Midtown Manhattan office property and negotiated the lease transactions on behalf of the ownership.

Among the new companies taking space at the property are Adaptive Financial Consulting, a company that brings together IP and consultants who understand financial services. The firm committed to 6,200 s/f of office space in the property and relocated its New York City operations to the new space from 1460 Broadway.

In addition, E.M. Rose Group, a boutique digital agency, expanded its office space at the property a year after inking a 1,700 s/f lease for its NYC headquarters. E.M. Rose Group relocated and expanded to 2,800 square feet of space that also features a large useable terrace.

Unisiltech, LLC, a newly launched company in the US by China-based Unitech (Dongguan Youkai Industrial Co., Ltd.) leased 1,400 square feet of space on the fifth floor. This will be the company’s first office in the US. John Ho of Bond New York represented Unisiltech in the lease negotiations.

Similarly, Donnelly Mechanical Corp., a provider of commercial HVAC services, with an office in Queens Village has leased a 1,400 s/f, pre-furnished space as a new Manhattan-based satellite office. The ownership worked closely with Donnelly in the transaction.

Other firms coming or expanding in the property included:

• Presence Learning, a 50-year old research base that supports telemedicine, will occupy 1,700 s/f on the fourth floor;

• Elecoco, Inc., a women’s clothing design and manufacturing firm, renewed its lease for 2,100 s/f of space on the sixth floor; and

• H.W.I. International, Inc., a wholesale women’s apparel company will extend and expand its current lease and relocate to 3,600 s/f on the ninth floor. H.W.I. will be expanding from its current 2,200 square-foot of space.

Built in 1930, 530 Seventh Avenue has been updated with wood and concrete floors and loft-like ceilings. The property is also home to The Skylark, a cocktail lounge, and Space 530, a co-working environment. The building is Wired Certified Platinum. A Wired Certified building offers tenants choice of multiple high-speed broadband providers and features an innovative and cutting-edge telecommunications system.

Midwood Investment & Development has signed a lease with Lead Edge Capital at 96 Spring Street in SoHo. The venture firm signed a 7,415 s/f lease at the building, bringing the building to 100 percent leased.

Lead Edge Capital is a growth equity investment firm that focuses on software, internet and consumer businesses. The firm was founded in 2009 and has raised $2 billion of capital since inception. Lead Edge Capital plans to relocate to 96 Spring Street from its current location in Midtown’s Chrysler Building this Fall. In addition to its New York office, the firm has a West Coast office in Santa Barbara, CA.

Scott Bogetti of Savills, inc. represented ownership in the transaction at 96 Spring Street, while Clark Finney of JLL represented the tenant.

Built in 1896, 96 Spring Street is situated on the corner of Spring and Mercer Streets and encompasses 60,000 s/f. The building has six full-floor office suites totaling 44,000 square feet of space and an additional 10,000 s/f of ground-floor and second-floor retail. The building’s most notable tenants include: Alo Yoga, an athleisure retailer and a restaurant group, which occupies the entire sixth floor.

McCarter & English, LLP, one of the oldest law firms in the United States, has renewed 11,058 square feet of space on the ninth floor at Canterbury Green, a 14-story, 245,000-square-foot Class A office building located at 201 Broad Street. The long-term lease renewal allows the law firm to reconfigure its space requirements without disrupting its day-to-day business operations.

Canterbury Green and 1 Stamford Plaza are located in Stamford’s Central Business District and offer access to nearby retail, restaurants and entertainment options.