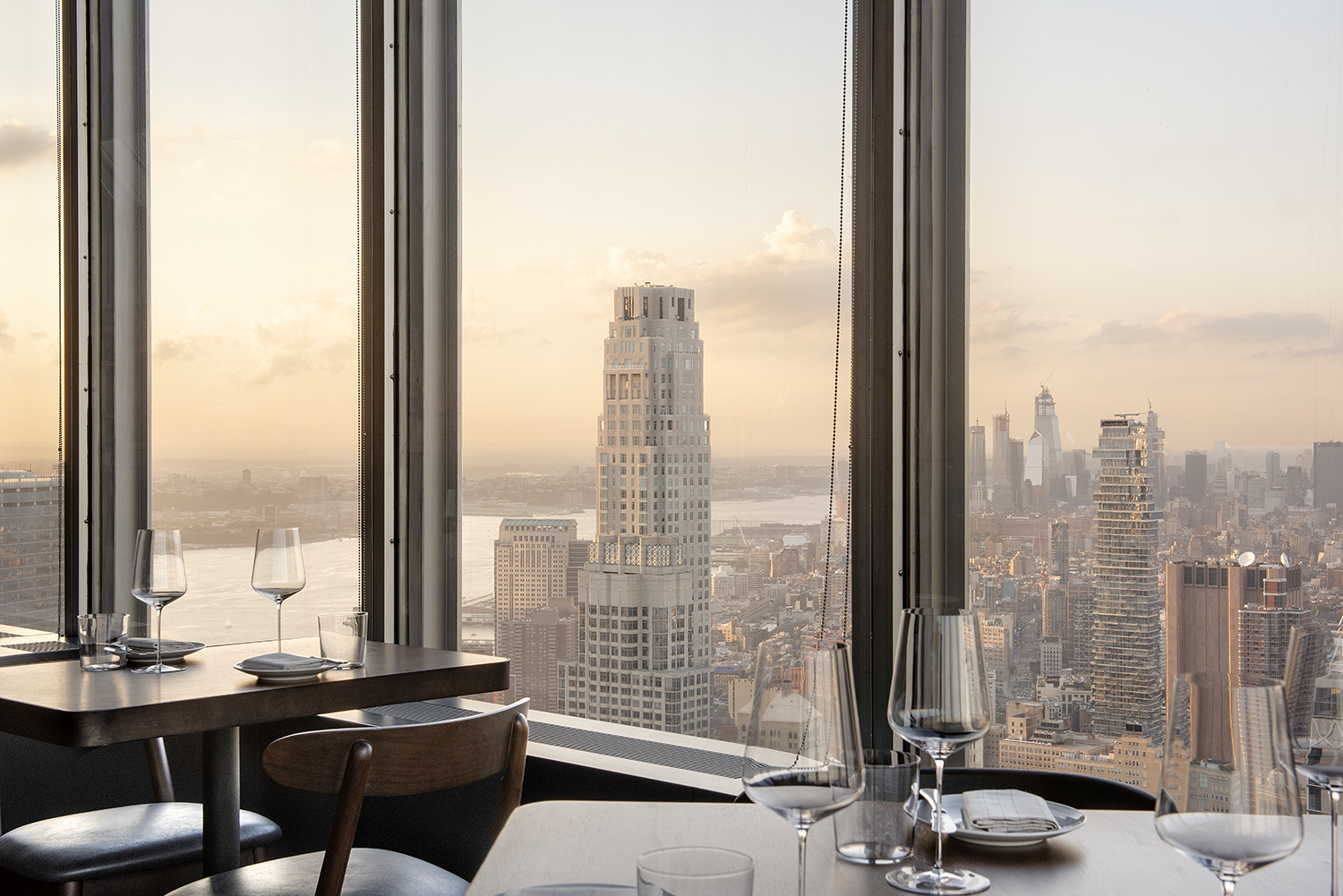 Fosun International joined restaurateur Danny Meyer to open their new Manhatta restaurant on the 60th floor of 28 Liberty Street last week.
Meyer’s Union Square Hospitality Group (USHG) partnered with the building owner on the $30 million venture to open the 90-seat restaurant named after the Walt Whitman poem, and an event space called Bay Room.
Executive Chef Jason Pfeifer devised the menu for Manhatta, which together with Bay Room, encompasses 38,000 s/f. The event space has one of the largest and highest ballrooms in the city.
Manhatta and Bay Room were designed by Woods Bagot. The restaurant’s 40 ft. long, black walnut bar is one of the longest in the city.
28 Liberty was originally conceived by David Rockefeller as an anchor of New York City’s financial center and was acquired by Fosun in 2013. Manhatta and Bay Room can be accessed through a dedicated ground-floor entry lobby on Liberty Street.
Manhatta and Bay Room will feature over 100 pieces of art chosen for the space as part of a larger partnership between Fosun and the Artist Pension Trust (APT), with additional works from The Fosun Foundation, JPMorgan Chase and photographer Karsten Staiger. The rotating collection will showcase a mix of works ranging from emerging local talent to established international artists.

Joseph “JJ” Johnson, the award-winning chef known for his Afro-Asia style of cooking, has leased restaurant space at 109 Lenox for his first solo venture.
Field Trip will be a grain and rice concept where diners can eat to a soundtrack of 1990s hip-hop and R&B playing in the background and his signature neon “JJ” letters in the window.
“Field Trip is set to make rice the new Ramen. Johnson’s concept is the newest in eatertainment, offering a shared experience through a culture-influenced menu of rice with a global flair,” said Faith Hope Consolo, chairman of the retail leasing team at Douglas Elliman.
The Faith Consolo Team exclusively represented the landlord and the tenant in the lease of the 1,125 s/f space at 109 Lenox Avenue between 115th and 116th Streets, a neighborhood with a “spectacular culinary scene,” according to Consolo.
Local eating options include classic soul food at Amy Ruth’s, SottoCasa Pizzeria, Sugar Hill Creamery the neighborhood ice cream parlor, restaurant and event space MIST Harlem, Barawin,e a French wine bar and restaurant, Harlem Pizza Co., and Harlem Shake a local burger spot.
Johnson who is best known for cooking food of the African diaspora. He most recently served as Executive Chef at The Cecil and its sister restaurant Minton’s.

Vietspot, a popular fast-casual Vietnamese restaurant, recently opened its second location in Lower Manhattan.
Known to draw lines out the door at its flagship operation on Nassau Street in the Financial District, the eatery leased a 460 s/f space at 200 Church Street in Tribeca, where it began serving its signature phờ soups and bahn mi sandwiches earlier this month.
Corey Miller of Eastern Consolidated represented Vietspot in the negotiations earlier this year, securing a 10-year lease at $144 p/s/f. Ravi Ianani and Andrew Stern of RKF represented the landlord, Sutton Management.
Along with French bread sandwiches and soups loaded with meat and noodles, the restaurants serve a variety of Vietnamese appetizers, rice bowls and drinks, such as iced lychee, earl grey milk tea and matcha lattes.