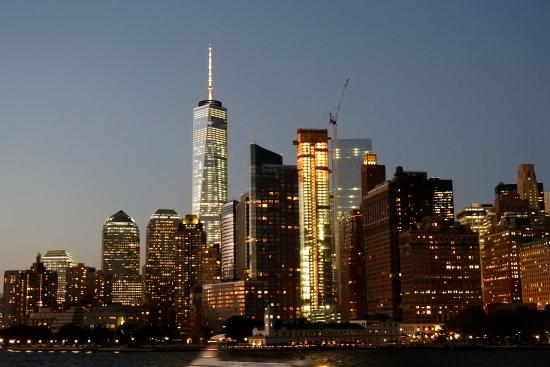 Jessica Lappin, the president of the Alliance for Downtown New York, has a historical view of the neighborhood she serves.
The 42-year old Lappin, whose ties to the area include being in the first graduating class of Stuyvesant High School’s Lower Manhattan location, has four decades of familiarity with the neighborhood, and she has witnessed its highest and lowest points.

“I’ve seen the neighborhood first-hand for four decades,” she said. “I think that’s helpful. It gives me additional context to what’s happening now. I was here during the World Trade Center bombing in ‘93. I lived in New York on 9/11. So I’ve had my own personal experiences with some of the tragedies there. It makes me prouder of where we are today,” she said.
Where the Downtown area is right now is in a period of exponential growth. Over 60,000 people live in the neighborhood, about three times the population before the terrorist attacks on September 11, 2001. Meanwhile, the area hosted a record 14 million tourists in 2015.

Lower Manhattan has also become one of the most desirable office locations in the city. According to a Cushman & Wakefield report from earlier this year, 369 companies from Midtown and Midtown South have taken 9.4 million s/f of office space in the area since January 2012. Some of the biggest lease deals in the neighborhood include Conde Nast’s 1.2 million s/f lease at 1 World Trade Center and Spotify’s 378,000 s/f lease 4 World Trade Center.

According to Lappin, running the largest business improvement district in the city in a period of heightened activity requires agility.

“The number of new companies coming into the area has drastically increased… And because of the diversification of the economy of Lower Manhattan, there’s not a static group. It’s constantly changing,” she said.

However, there are limits to the powers of a BID, and one of Lappin’s biggest challenges is forming alliances on key issues such as safety and the local economy.

“We have ideas about things that should happen both in terms of the economy and the public realm. (But) we’re not government. The Alliance doesn’t own property. We don’t own streets, either. You have to be somebody who likes leading people and creating consensus to make things work,” she said.

Lappin’s training in building consensus came from her two terms in the New York City Council. A former co-chair of the Women’s Caucus, her legislative achievements include proposing a women’s health and reproductive health bill. During her time as the council representative for the Upper East Side, East Midtown and Roosevelt Island, she also played a role in bringing Cornell Tech’s Applied Science and Engineering Campus to Roosevelt Island.

She may no longer be in the business of local legislation. However, she considers her position to be an extension of her public service record.

“I feel like I am still involved in a specific place in the city and I am still working towards the public good,” she said.
Nonetheless, she is evasive when it comes to a possible return to elected office. “I am very happy as president of the Downtown Alliance,” she said.

Lappin will be a part of 6th Annual REW Women’s Forum on June 14. She participate in a Neighborhood Changes panel with Extell’s Raizy Haas, CREW-NY’s Michelle O’Connor and CetraRuddy’s Nancy Ruddy. For more information, visit nycwomensforum.com