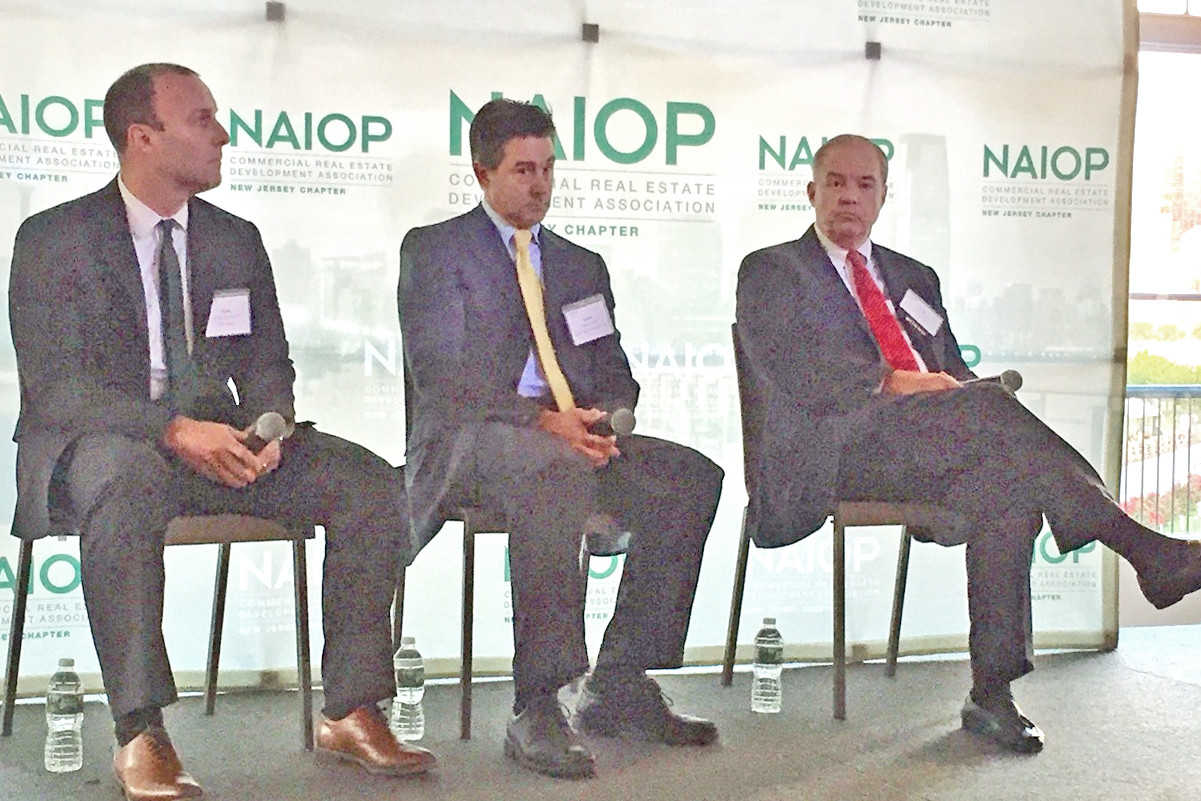 Noting the ongoing strength of the CRE market, Gibbons asked the panel to comment on how key trends are impacting their investment decisions.

Diaz stressed Prism’s increased reliance on data analytics to help them make decisions on both macro and micro issues.

“For example, we’ve been taking a hard look at the cyclical age of the market. New Jersey has a graying population, and empty nesters are the largest and fastest growing segment of residents in our multifamily properties. We developed Parkway Lofts in Bloomfield to meet high Millennial demand, and today the number one demographic there is 49 to 59,” Diaz noted.

Taylor, who has led Matrix’s strategic expansion throughout New Jersey and into New York and Pennsylvania, said his firm is looking farther afield for large pieces of property for industrial development to meet current and future demand.

“The e-commerce trend is in full swing, and the bigger the building the better. We’re designing four projects right now averaging one million square feet. It’s foolish not to build this way,” he said.
Crawford added, “We own mostly suburban industrial assets. With the growing trend of millennials moving downtown and wanting same day delivery, we’re pushing now for more of an infill presence to be closer to end-users.”

Gibbons asked each speaker whether or not their business strategies specifically address the possibility of a market disruption.

“There is no data showing a downturn is imminent,” said Crawford. “Simultaneous global growth and the inflow of global capital are driving the industrial economy, which has us thinking there’s still a lot of runway left. E-commerce, which also continues to be a huge driver for industrial, shows no signs of slowing down.”

Taylor agreed, saying, “This market still has legs and New Jersey has a lot going for it. However, we will have a new Governor and there’s likely to be a dramatic policy shift out of Trenton. Anyone buying large portfolios has to be designing product to be as flexible as possible to adapt in the future.”

Diaz noted that because many of his firm’s deals are long dated, they are focused less on the short term and more on lower leverage points. “The reality is there are ways to make money in good times and bad, so we keep a lot of dry powder on the sidelines.”

Taylor added, “We’ve never built more aggressively and we’ve never been less leveraged. On the whole, our industry is much less leveraged than in the past, which will help us weather any temporary disruption that comes along.”

The recovery has also had an impact on the relationships between developers and municipalities. “As things have improved since the downturn, we’ve found that municipalities are asking for more and expecting us to solve some of the issues that were created at sites in the past,” said Gibbons.

Diaz noted that many times developers are expected to bear more of the risk and additional costs, including taxes, that are being levied on transactions.

“Municipalities don’t understand the value of what we’re bringing to the table, the risk of capital, time and reputation that’s on the line when we invest a hundred million dollars in a township. There’s a great need to educate local leaders about the new urban paradigm that we’re dealing with when it comes to planning,” said Diaz.

Taylor believes there is also a need to rebalance the investment risks. He said, “PILOTs are an essential redevelopment tool, but as municipalities use them more and more as incentives, we’re the ones paying up front to address problems for which they are responsible.”

On the issue of business development incentives, Gibbons noted that while the industry relies heavily on them to be competitive, a new administration might not be in favor.

Diaz responded, “There isn’t a deal we’re doing that doesn’t have incentives built in. The new governor may prefer to give homeowners rebates rather than focus on bringing in more companies to grow jobs and the economy. But we need those incentives for New Jersey to survive in a high-cost environment.”

While all agreed that New Jersey offers a wealth of advantages, the panelists each cited ongoing challenges such as the depth of the state’s talent pool and the lack of investment in an aging transportation infrastructure.

When asked what keeps them up at night, the speakers were unanimous in saying the geo-political climate at home and across the globe.

“It’s a complex world that’s constantly changing,” said Diaz. “We need to look at it from every angle, every moment, and if we’re not willing to change and adapt we’ll get left in the dust.” Crawford’s key concerns include interest rates, the impact of e-commerce on brick-and-mortar retailers, and incentives to attract businesses to the state.

“E-commerce is creating more jobs than any industry in the country. New Jersey has to be careful not to allow other states to provide better incentives to lure away these companies,” he said.

Taylor said he worries about the rising cost of living in the Garden State. “The new governor will need to make tough decisions about the budget and not be afraid to disappoint special interest groups.

“We’re all going to have to pay a price in order to create a future where our kids won’t be forced to leave here to find jobs and affordable places to live.”