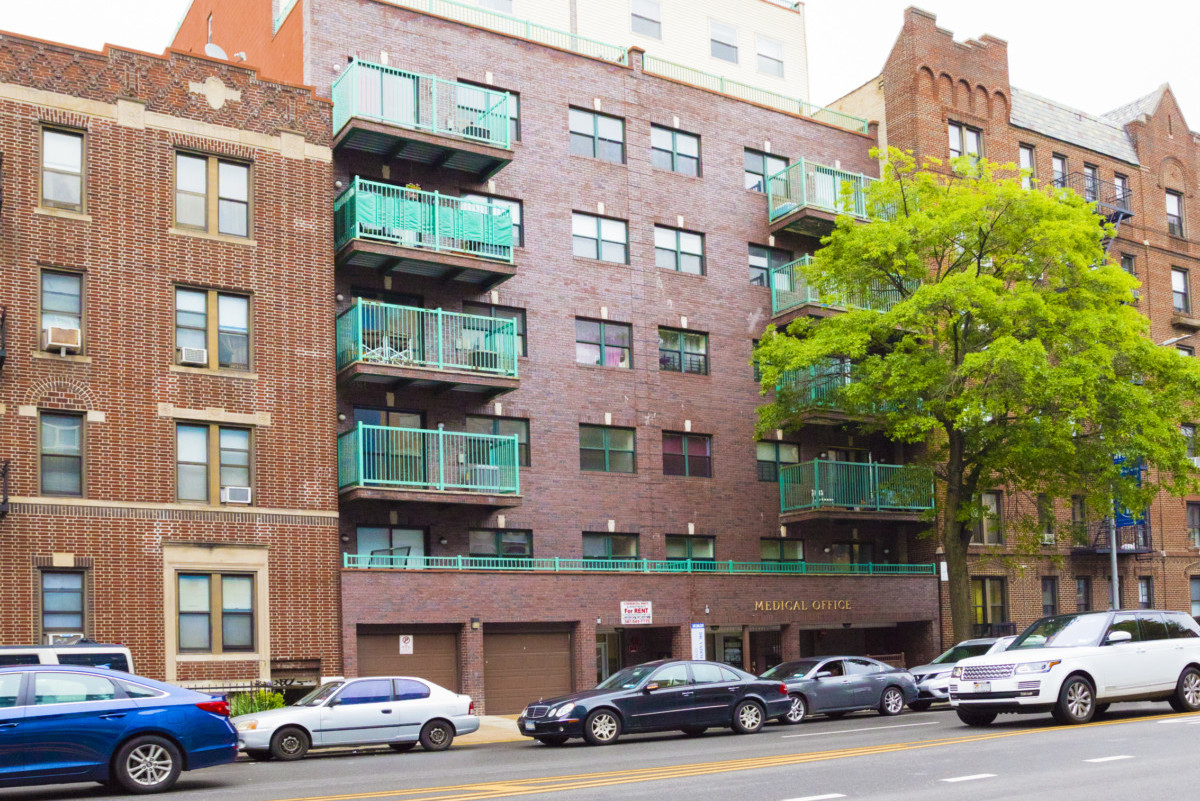 The five-story walk-up building comprising 38 apartments was purchased by Solil Management, according to City records. Solil is the company which manages the Estate of Sol Goldman and is one of the largest landlords in New York City.

The building traded for 18.5 times the rent roll, according to Sean Lefkovits and Ivan Hakimian of HPNY were involved in the deal.

The majority of the apartments are one-bedroom units.

The asking price for the two eight-story properties is $13 million.

According to the broker, the properties are in pristine condition having been meticulously maintained by the developer.

All of the apartments and common areas are built with condo-like finishes, with hardwood floors, new stainless steel appliances and balconies.  The 7th and 8th floors are duplex apartments that have large terraces and views of Brooklyn as well as the skyline.

“These buildings present a rare opportunity for investors to own new construction rental buildings on Ocean Avenue,” said McGee, a director at Ariel Property Advisors.

The developer built the properties under the 421-a tax benefit program, with the incentive expiring for 2151 Ocean Avenue & 2155 Ocean Avenue in the years 2027 and 2024, respectively.

HFF is marketing the property exclusively on behalf of the seller, a joint venture between ASB Real Estate Investments and L3 Capital.

120 North 6th Street is 100 percent leased to high-end fragrance retailer Le Labo, a subsidiary of The Estée Lauder Companies Inc., which recently commenced a 10-year initial lease term at the property to serve as its U.S. headquarters and New York flagship location.

Le Labo has traditional retail use, including a café, on the ground floor; office on the second floor; storage and shipping in the lower level and special events and entertainment space on the finished roof deck.

Situated on the southwest corner of North 6th and Berry Streets in Brooklyn’s Williamsburg neighborhood, 120 North 6th Street has 125 feet of wraparound frontage on the North 6th retail corridor, which includes nearby tenants Gant, Rituals, Lululemon, Madewell, Maje and Urban Outfitters, and is one block from the Bedford corridor.

“120 North 6th Street offers investors the rare opportunity to acquire a newly renovated, jewel-box asset with long-term upside in a Williamsburg market that is arguably one of the most dynamic in New York City,” Rizzi said.

Besen & Associates announced that Hilly Soleiman and Ronald H. Cohen have been retained to sell 4468-4474 Broadway in Nothern Manhattan.

“4468-4474 Broadway is situated on the east side of Broadway between Fairview Avenue and 192nd Street and is located in one of the most desirable sections of Hudson Heights in Northern Manhattan, boasting high foot traffic and bustling retail,ˮnoted Besen in a press release.

The property is located just north of the George Washington Bridge between Fort Tyron Park and Harlem River Park.

“We suggested industrial use and the company opted to move forward and develop the site themselves,” Danzig said.

“The town was happy to see this property with a vacant 360,000 s/f office building being put back into use after so many years. This is the first significant spec warehouse development in Wayne in a long time.”

The new warehouse will have 40-foot-clear ceilings and is designed with office space on each end of the building, so it could be divided to accommodate two or three users.

The new warehouse will have loading capacity for 42 tailgates, two drive-in doors, and parking for 70 trailers and 224 cars.

Danzig said he expects the new warehouse will be complete and available by the end of first quarter or the beginning of second quarter of 2018.

“Peykar Family Properties hopes to capture the very active e-commerce market, which accounts for almost half of the new spec product being built,” Danzig said.

“The building, however, could accommodate any use, food or consumer products, for example. It will be priced competitively in the marketplace.”