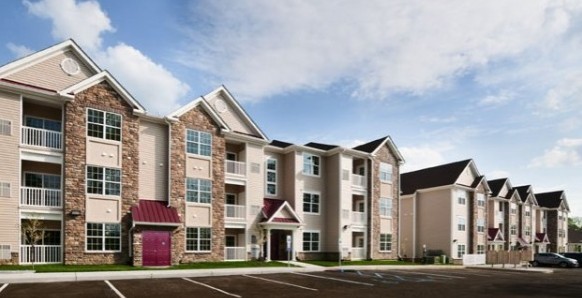 Cushman & Wakefield has been retained to sell a development site with approved plans at 1580 Nostrand Avenue, in Brooklyn’s Flatbush neighborhood.

The asking price is $28,000,000.
The large-scale development site contains 237,937 gross square feet with frontage on Nostrand Avenue, Albemarle Road, and East 29th Street.
The plans for the site include 21 floors of market-rate residential apartments over a two-story community facility base, and a parking facility for 163 cars. The plans call for 153 residential apartments, comprised of 26 one-bedroom, 123 two-bedroom, and 4 three-bedroom units.
The property qualifies for an as-of-right 421-a tax abatement as current ownership has already performed demolition and constructed footings. The R6 zoned development is designed as-of-right and in conformance with the New York City Zoning Resolution.
The site is being exclusively marketed by Cushman & Wakefield’s Stephen P. Palmese and Richard Velotta.

LIC-based cosmetics manufacturer MANA Products is selling its facility at 27-11 49th Avenue.
The company has tapped Right Time Realty’s Joe Ibrahim and George Raftis to market the manufacturing, storage and distribution facility that sits on nearly 2.5 acres in Hunters Point.

The brokers are asking $65 million for the property, which MANA is selling in order to acquire and develop a much larger piece of land for its expanding business, according to Ibrahim.
With its waterfront access, high ceilings and panoramic city views, the 200,000 s/f property could be convert to offices, filling a niche in a market bustling with development activity.
Right Time Realty most recently sold the Atlas Terminals site in Glendale, Queens, to Broadway Stage. The seven acre industrial site has been successfully converted into sound stages and is currently in production with Netflix’s The Get Down directed by Baz Luhramann.

A 466-unit New Jersey apartment portfolio is expected to fetch in excess of $90 million.
ARA, A Newmark Company (ARA Newmark) and the New Jersey NGKF Capital Markets team just announced the exclusive listing of the two-property portfolio, the first multifamily listing in New Jersey for ARA Newmark since the company was acquired by BGC Partners, Inc. in December 2014.

Steven M. Schultz, executive managing director for the NGKF Capital Markets team, Blake Okland, vice chairman, head of US multifamily for ARA Newmark, and Philadelphia-based director Brett Segal, are serving as primary advisors on the transaction for Highview Homes, a New Jersey-based developer.
The portfolio consists of two properties. Laurel Green is located in the thriving Mount Laurel submarket of southern New Jersey, just a half-hour drive from Philadelphia’s Central Business District. Morgan’s Bluff, located in the central New Jersey town of Sayreville on the Raritan Bay, is less than a one-hour drive from Lower Manhattan.
Both luxury, Class A, three-story, garden-style communities are near major employment centers, institutions of higher education, thriving retail markets and a variety of recreational and tourism destinations.
The two phases of Laurel Green were constructed in 2014 and 2015, consisting of a total of 298 units. Morgan’s Bluff is currently under construction and will consist of 148 units upon completion, which is anticipated by year-end.