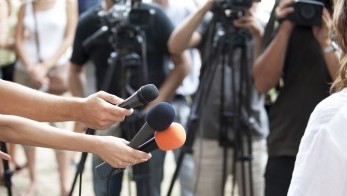 Crisis management in the midst of a crisis

By now, we all have seen the disturbing footage of a recent crime in the city in which a small woman is mauled by a hulk of man in front of glass doors, as security cameras record the beating. Concurrently, we witness three men inside the building, two of whom appear as burly as the perpetrator, and their only response is to close the doors.

Not only have we collectively seen yet another hate crime, this time against an Asian woman who is also a senior citizen, we have watched the witnesses in real time do absolutely nothing to help the victim.

Within hours, we learned at least two of the men were employees of 360 West 43rd Street, the luxury property on whose front sidewalk the woman was beaten. During multiple broadcasts that evening, there was a statement from the landlord’s communications team denouncing hate, violence, and racism. A similar message was subsequently broadcast by the workers’ union.

The statement also added the two employees had been suspended. Viewers were stunned: despite the inhumane inaction of the three men caught on camera, two still have their jobs! The third may be a vendor who still has a client. It was an implausible situation exacerbated by terrible optics and a delayed response.

Communications consultants experienced in protecting clients in crises know to act swiftly and definitively with an immediate strategy, followed by well thought-out positioning.

It may be assumed that the building owner/manager shared the footage with the NYPD in the spirit of helping solve the crime. But what is not clear is why, after viewing it themselves, they did not take a more defined course of action that would disassociate their firm from the inaction of the three men inside the door. Simply announcing the suspension of the staff was not enough.

Perhaps management was reluctant to make a declarative statement about the onlookers because they are members of a powerful union. But do we really believe SEIU 32B/J would go on the record to try and justify a lack of response that was unambiguously caught on camera? These men could have chased the fiend away or distracted him by yelling. Or as the New York Post blasted on the cover a couple days later, “They Didn’t Even Call 911!”

In crisis situations, messaging is critical. We must be strategic in protecting our clients in these unprecedented times of controversy, insecurity, hyper-sensitivity, and economic turmoil. The real estate industry in New York sits in the crosshairs of rapidly rising crime, pandemic-based revenue losses, and for the past few years, as a target of state and city politicians that are anti-development, anti-landlord, and anti-broker.

For those of us responsible for garnering media coverage for a client base focused on all things real estate, we need to provide sound advice that is both empathetic and tactical when addressing potentially compromising incidents in these challenging times.

In highly charged circumstances, such as the beating we witnessed last week, a two-pronged approach must be swiftly implemented. The messaging should be communicated through traditional channels, such as broadcast, print and digital media, as well as on social media platforms.

Twitter is the most obvious choice for relaying swift, pointed messages. But if a company does not have a presence on that platform, Facebook and Instagram can be equally strong.  We must be mindful that social media messaging requires a carefully delivered, deft approach because followers tend to respond quickly, emotionally and, for the most part, anonymously!

The language should not project emphatic negativity or blame.  Rather, it has to convey a solution-driven message that encompasses situational sensitivities and strong moral standing.

Facebook is an excellent medium for storytelling, as well as communicating positive action. But regarding the response to the West 43rd Street incident, the building’s owner/manager, which happens to be one of the city’s premier real estate firms, unfortunately delivered canned statements that identified as cliché. As a result, the Instagram posts produced the wrong responses, which were overwhelmingly angry and derisive.

Had they conveyed direct action, there would have been a more positive response. By admitting alarm, i.e., empathy, at how these particular staff members were delinquent in their duties as citizens, the owners would have not been as exposed to the type of scrutiny they are currently experiencing. It was an unnecessary blemish on the reputation of a company with a long history of strong development, management, ownership, and community interaction.

As communications professionals in precarious times, it is incumbent on us to be candid with our clients and provide clear and sensible advice they may not want to hear or agree with. But our experience tells us if we can help them move past a crisis with good decisions and clear-cut messaging, we can help them maintain their well-earned reputations for the future so that the next wave of stories accentuate positive contributions.