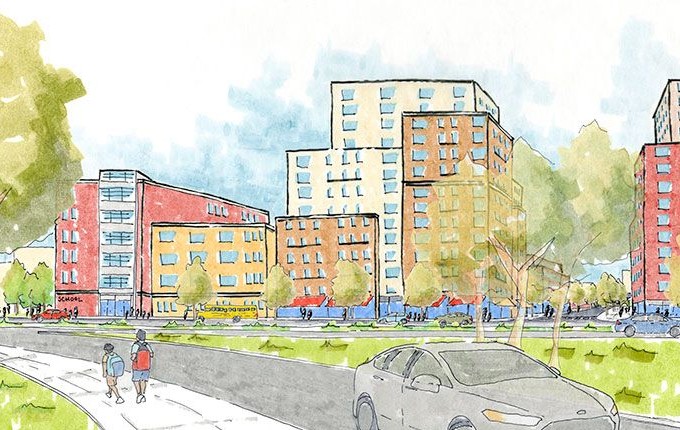 The city has issued a Request for Proposals (RFP) to develop the City-owned Dinsmore-Chestnut site in East New York, Brooklyn.

The site is a cornerstone of the East New York Neighborhood Plan and comes with $267 million in investments for the neighborhood.

In addition to the thousands of housing units that will be built under the plan, a Workforce1 jobs center has already opened and planning has begun for a state-of-the-art multipurpose community center as well as a new 1,000 seat public school.

“Working together, we have seen significant progress under the East New York plan. As we continue to deliver affordable housing, jobs, parks, roads and schools, we are following up on our promises and fighting every day to make our City fairer and stronger,” said Mayor Bill de Blasio.

“The City-owned lot at Dinsmore-Chestnut has been vacant for decades: a tragic and all-too familiar symbol of previously unfulfilled promises and a lack of investment in East New York,” said Council Member Rafael Espinal.

“With the East New York Neighborhood Plan that passed the City Council a mere eight months ago, and the de Blasio Administration’s commitment to building affordable housing, this site is finally being put to effective use. The issuance of an RFP for this major cornerstone of the ENY Plan, is a crucial step toward the realization of our goals and the sustained growth of our community. I look forward to viewing the creative proposals and taking part in the upcoming process.”

The Dinsmore-Chestnut parcel is approximately 28,540 s/f and is located at Brooklyn Block 4142, on part of Lot 32. The development site is bordered by Dinsmore Place, Chestnut Street and Atlantic Avenue.

Proposals must include up to 200 affordable housing units that meet the income needs of the neighborhood. The inclusion of quality commercial and community use is encouraged. Proposals should also include open space and environmentally friendly features. Many job opportunities affiliated with the Dinsmore-Chestnut site will be filled through HireNYC, the largest targeted hiring program in the nation, to help New Yorkers access training and jobs through the City’s purchases and investments.

The site is one of the last remaining large plots of vacant City-owned land in the City. Plans for the development of this site were shaped by community input through HPD’s Community Visioning Workshop series in June 2016.

The site is being developed under Mayor Bill de Blasio’s Housing New York: A Five-Borough, 10-Year Housing Plan to create and preserve 200,000 units of affordable housing.

Approved by the City Council in April 2016, the East New York Neighborhood Plan is a multi-agency coordinated initiative to promote the creation of affordable housing, foster economic growth, encourage pedestrian-friendly streets and invest in community resources for the enrichment of the neighborhood.

The Administration has made significant progress towards the East New York plans goals. In addition to today’s release of the Dinsmore-Chestnut RFP:

The Administration is working with Phipps Houses on the development of 100 percent affordable housing with extensive public space on the former Chloe Foods private site. Demolition of the existing structure is underway to make way for development.

Community Retrofit NYC is also underway in East New York. This is a free program by the City of New York to support small and mid-size building owners in Central Brooklyn and Southern Queens to pursue energy and water upgrades.

The team works with owners through every step of a retrofit process, from identifying opportunities for saving, to connecting to incentives, to helping select a contractor for a project.

They will also introduce new low-cost City financing to cover the costs of the retrofit. This is a key part of Mayor de Blasio’s OneNYC plan to build a more sustainable, resilient and equitable NYC.