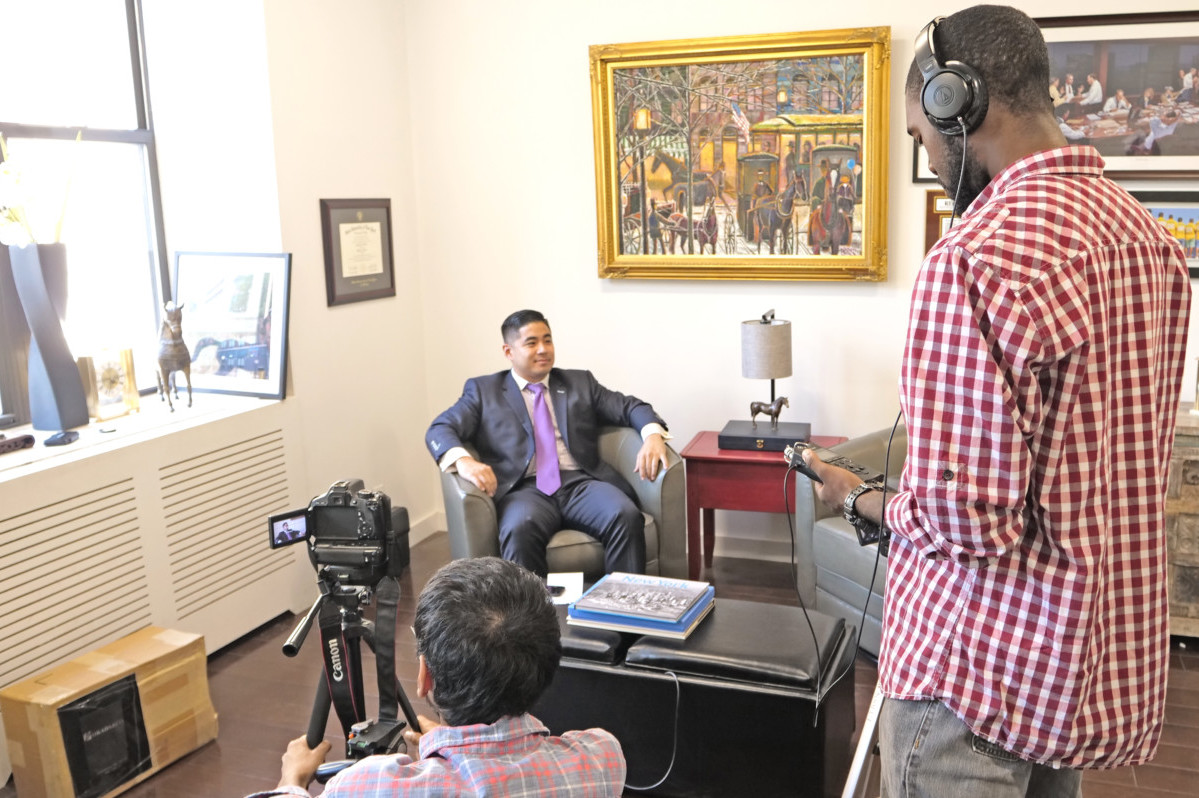 Chris Okada is by nature an optimist. Fifteen years building his own firm in the hard-scrabble New York real estate sector has taught him the value of seeing the glass half full.

He wet his feet in the business pounding the streets of the Plaza District leasing office space for his late father, Naomi Okada, who ran Okada International Corp. for 47 years.

The pay-off came when he sold a building 18 months into his new career. “The total commission was $76,000. I was 24-years-old and I felt that was a tremendous amount of money. I was very proud to be able to give my father $38,000 in one shot. From that point on, I was hooked,” he told REW of his entry to commercial real estate.

Okada has lived through some peaks and troughs since them, but Okada & Co. has come through each cycle just a little bit stronger. In 2012, he expanded from office and retail brokerage to launch Okada Acquisitions and has since closed on over $200 million in deals with a slew of investment partners.

He partnered with Ira Fishman and Dana Moskowitz at EVO, along with Newmark Holdings, to acquire a 12-story office building across from the Empire State Building, at 41-45 West 34th  Street. In a joint venture with JVL Property Group and Zion Enterprises, he purchased the former St. Vincent’s nursing facility at 432 West 52nd Street and turned it into condos. And his firm has picked up a handful of retail parcels over the past 12 months, including 148 West 24th in Chelsea and 135 West 52nd Street and is actively seeking other investment opportunities.

Even with the market now dragging its way through the summer, investment sales down 30 percent on this time last year and retail “in freefall,ˮ the perpetually buoyant broker sees a wood among the trees.

And he is harnessing his own strengths to lead a new marketing initiative that he hopes will inspire some of his more pessimistic peers.

“We have been here before,ˮ Okada said of the current malaise. “But there is still a lot of liquidity in the market. I have been a bear for the last three, four years.  Here we are in 2017, the stock market is at an all-time high, land prices are coming down a little. We are seeing a freefall in the retail market but, in general, it’s not as bad as people say.

“Commissions are being slashed in order to make everyone happy. Prices have come down, so commissions have come down. Now it’s all about the team work environment. Patience, working twice as hard and twice as smart with your tech and your data. I also believe in giving back, providing value to the people we work with and who pay attention to us on social media.ˮ

With that in mind, his team got behind the idea of launching an internet web series. Called 36th & Broadway and broadcast on YouTube, the vlog details the ups and downs of being a New York City-based commercial real estate executive and offers advice and encouragement on how to go from rookie agent to entrepreneur and developer.

After the earliest installments of 36th & Broadway garnered a positive response, Okada said, “We felt, if we are going to do it, lets do it right. Lets make it professional, high quality and educational.”

Now they are developing a documentary that’s become a project of its own that will include some of the leading dealmakers Okada has worked with over the years.

Okada said, “We have done some pretty big deals — we sold half a million square feet at 1466 Broadway and 136 West 42nd Street to Crown Acquisitions [with co-broker Raphael De Niro of Douglas Elliman]. We also sold 960 Avenue of the Americas to Hidrock Realty, and 245 Tenth Avenue to Aristone Capital.

“It is going to be a documentary film that I hope will be educational, entertaining and inspiring. I hope it will strike a chord with people both in the real estate business and those in other sectors. We have all been through so much, the documentary is really to remind people that, after the 9/11, after the financial crisis, Hurricane Sandy – after all of that, we as New Yorkers recovered, thrived and took advantage of once-in-a-generation opportunities.ˮ

He is still compiling a cast list he hopes will include such high profile players as De Niro, Silverstein, Barnett and Chetrit, among others, but Okada is confident that his efforts will pay off.

“I know there are opportunities out there, we just have to find them,ˮ he said. “My hope is that our documentary will show people that, even when things seem at their most bleak, there is always a light on the horizon. I hope that hearing from some of our industry leaders and how they have overcome challenges will remind people that they never know what’s around that corner. It could be the biggest deal of their life.ˮ