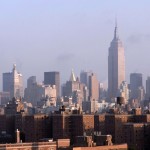 The transaction also included the assumption of existing debt, which was provided by Nationwide Insurance and arranged by HFF.

The BSD joint venture originally purchased the mid-rise, loft-style multifamily properties at 210 East 22nd Street and 220 East 22nd Street in 2012 for $85 million.
The announcement was made by BSD’s principals Raymond Chalme and Daniel Blanco.

“The sale of the Gramercy Park portfolio demonstrates our investment strategy of identifying and purchasing high-quality assets, located in superior markets/neighborhoods and then repositioning the properties through a targeted capital improvements campaign,” said Chalme.

“In implementing our operational and capital investments, we were able to unlock additional value at the multifamily complex that allowed us to reap expectional returns for our investment partners.”
The Gramercy Park portfolio consists of two, fully-occupied mid-rise buildings, Gramercy West (210 East 22nd Street) and Gramercy Central (220 East 22nd Street) between Second and Third Avenues.
The properties are mainly comprised of studio and one-bedroom units with multiple floor plans that attract a broad range of tenants.

All the units have undergone renovations, with numerous featuring hardwood floors, balconies/patios, walk-in closets and loft style layouts. Following the acquisition in 2012, the BSD and Crow Holdings partnership invested $4 million on significant capital improvements including the installation of new windows, rooftops and landscaped private gardens.

The HFF investment sales team led by senior managing director Andrew Scandalios, along with managing director Jeffrey Julien and director Rob Hinckley marketed the assets and arranged the sale on behalf of BSD and Crow Holdings.

The assumption of the loan was provide by Nationwide Insurance, led by Dan Merkle, Peter Lynch and Evan Ballman.

The announcement on the sale of the Gramercy Park portfolio follows the $178.5 million acquisition of 298 Mulberry Street and 304 Mulberry Street by BSD and Crow Holdings in 2014.
The partnership was also instrumental in the success of its Sullivan Street condominium project, which completely sold out four months after hitting the market at $3,000-per-square-foot – a record for a Greenwich Village property.

Brokers share the big mistakes that could cost you business