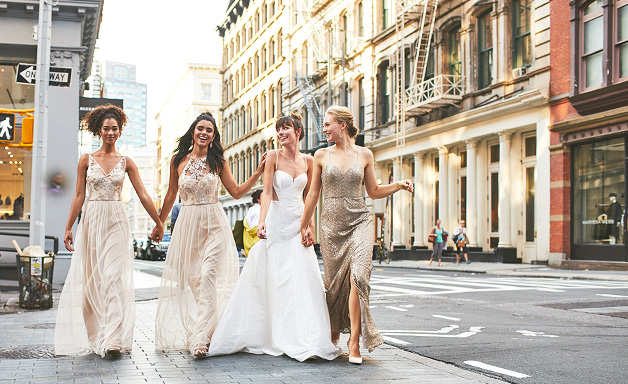 The Chicago-based retailer is disrupting the wedding retail market with its next-generation showroom experience, concierge-driven and all-channel retail strategy.

Launched in 2014, Brideside is rapidly expanding and now has three brick-and-mortar showroom concepts. The Flatiron District flagship opened on November 13.

Brideside is transforming the wedding retail market in a similar fashion to Bonobos in menswear and Rent the Runway in women’s formalwear. Unlike traditional bridal boutiques carrying limited inventory, colors and sizes, Brideside prides itself on size inclusivity and carries as many as 30 sample sizes per designer.

“Brideside’s new flagship is in the heart of the Flatiron District, a neighborhood that has established itself as the go-to destination for innovative, strategically savvy retailers looking to strengthen their brand value and drive customer engagement,” explained Fantasia.

“Flatiron attracts young, sophisticated, lifestyle-focused shoppers, making it the perfect location for Brideside to open its first stand-alone flagship.” Brideside’s new location will include a 2,400 s/f retail showroom on the ground floor that was designed by retail and showroom expert Gala Magriña Design, a woman-led New York design firm that has created spaces for millennial favorites such as Tie Bar, Paige Denim and Gant.

In its lower level, Brideside will have an additional 500 s/f dedicated to storage and back-of-house operations.

The six-story, 115-year-old building, on East 20th Street between Broadway and Park Avenue South, is also known as Gramercy House. The structure features a classic glass and iron façade.

“Brideside’s first Manhattan flagship will be in good company, located among the most well known fashion, tech and lifestyle brands that draw a modern, fashion-forward crowd,” said Brideside co-founder and CEO Nicole Staple.

“We are excited by the neighborhood’s dynamic, eclectic mix of innovative retail concepts, as well as its strong demographics.”