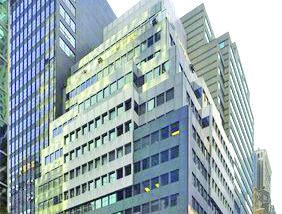 The Bank of China has funded a $313.5 million loan for the partnership that owns 63 Madison Avenue.

The loan refinances the existing mortgage and includes a future advance facility to fund renovations at 63 Madison according to Fried Frank, who acted as counsel to a partnership of George Comfort & Sons, Loeb Partners Realty and Jamestown that owns the 15-story NoMad property.

Jamestown acquired a 49 percent stake in the property from George Comfort and Loeb Partners in February 2016.

According to the Wall Street Journal, Jamestown bought a 49 percent share in 63 and 200 Madison Avenue from the Comfort / Loeb partnership in a deal that valued the properties at $1.15 billion.

The 870,000 s/f 63 Madison Avenue is home to tenants such as CBS and New York Life, while 200 Madison houses Greater New York Mutual Insurance, Philips-Van Heusen and others.

Bank of China has been growing its core lending business in recent years with more commercial real estate lending as well as corporate finance and commodity hedging, according to the Journal.

It is also expanding its US footprint, adding an estimated 100 people to its American payroll and buying a new 470,000 s/f headquarters at 7 Bryant Park last year.

Bank of China also provided $310 million of construction financing in April for a 431,483 s/f laboratory and office property that Alexandria Real Estate Equities Inc. is developing in Cambridge, Mass.

The loan — arranged by CBRE — represents about 64 percent of the project’s estimated $485 million cost.

Meridian arranges $104M for The Hamilton