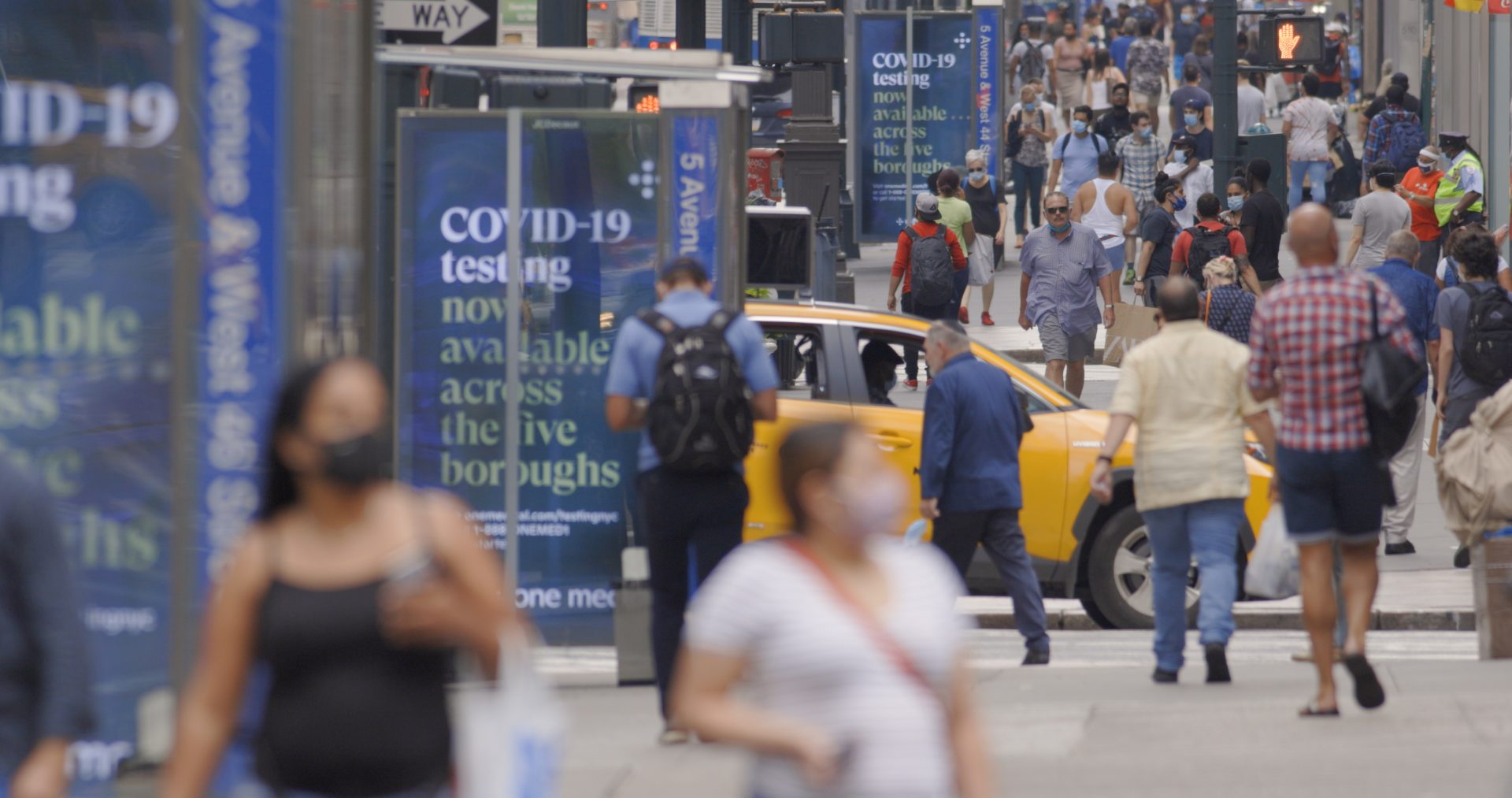 New York always comes back.  As New York City recovered from the darkness of 9/11 and the depths of the financial crisis even stronger, it will emerge from the pandemic in the same way.

As of July, Manhattan already recaptured 110,000 jobs tightening the unemployment rate to 8.3 percent from a peak of 16 percent during 2020. Before the pandemic it sat at 2.8 percent. We anticipate job growth to surge once companies return to the office in large part this fall.

Goldman Sachs and JPMorgan Chase already started their return-to work efforts on June 1, which could have a trickle-down effect on other financial services companies and office-using industries.

As of the week of July 18, 2021, Manhattan office foot traffic at representative locations is up 5.8x from the quarantine-induced low of the week of March 29, 2020, but remains 67 percent below the week of March 1, 2020 levels, according to an analysis of cell phone data by Avison Young’s Innovation and Insight Advisory team.

While it’s unlikely that the Manhattan office market will achieve normalcy in terms of vacancy rates or leasing activity at any point soon, we are anticipating greater leasing volume in the next 12-18 months compared with post-COVID levels to date as tenant-favorable conditions persist in most segments of the market and return-to-work efforts accelerate.

Companies continue to be drawn to New York City’s talent pool. Google, which has 11,000 employees in New York, plans to add 3,000 in the next few years. Google intends to return to its offices in West Chelsea in September. Meanwhile, Facebook leased over 700,000 square feet during the midst of the pandemic.  New York City’s universities will largely reopen in the fall, bringing back students from around the world and adding to the city’s bench of talent.

Once international travel bans lift, New York City’s tourism numbers will also surge again. NYC & Company predicts that only 36 million people will visit New York City in 2021.  This number should gradually increase closer to the 71 million visitors recorded in 2019, which will in turn fuel the city’s economy.

Lastly, New Yorkers and the real estate community are excited about having new leadership. Eric Adams, the presumed next Mayor, has made it his priority to ensure the streets are safe so that New York City can recover and prosper.

Overall, New York City’s sales activity picked up in the 2nd quarter with a total of 103 sales, the most since the 1st quarter of 2020.  We’re anticipating large pent-up demand as the 10-year quarterly average is more than double that figure. Further, New York City total dollar volume in 2022 is projected to be at only $7.8 billion, the lowest sales volume since the depths of the financial crisis in 2009. The 10-year average is more than 4.5x this amount.

We’re already seeing a recovery in pricing, however. According to Avison Young’s Tri-State Investment Sales Report for 2Q21, Manhattan multi-family sales values increased 4% to $742/SF in the 2nd quarter compared to the trailing 4-quarter average; retail was up 6% to $1,545/SF; office pricing rose 10% to $1,039/SF; and development sites increased by 9% to $434/BSF.

Multi-family assets in Manhattan offer exceptional value with average capitalization rates of 4.67%. This allows for positive leverage when mortgage rates are still widely available in the 3 percent range. Residential rents are already recovering nicely. Concessions are burning off and landlords are returning to the 90% occupancy that they have historically enjoyed. Net effective rents, however, are still off by 20-30% from before COVID. Rent growth over the next few years should be substantial. Although multi-family pricing rose 4% to $742/SF in 2Q21 compared to the trailing 4 quarters, it is still 24% below 2018-2019 pricing offering considerable value.

A strong multi-family strategy will be to invest in properties that are mostly or entirely fair market to take advantage of this rent recovery. Investors should also look to target tax protected classes or properties with tax abatements where real estate tax increases are capped.

The average price per square foot for Manhattan retail properties sold in 2Q21 rose 6 percent compared to the trailing 4-quarter average, which is a positive sign.

Retail locations in residential neighborhoods have fared better than more tourist-dependent locations. According to the REBNY’s Spring 2021 Manhattan Retail Report, average asking rents dropped by less than 15% on the Upper East Side compared to rents in the Spring of 2019.

There will be even greater opportunities for high street retail, as the pendulum has surely swung too far as the drop in tourism has had a major short-term impact. For example, average asking rents in SoHo fell by nearly 40% from 2019 to 2021.

A smart retail strategy will be to buy significantly discounted or distressed vacant retail. Investors should look at occupied retail to take advantage of capitalization rates that have greatly expanded in favor of buyers.

Office properties have been the most surprising asset class. Sales values have increased since the pandemic, rising 10% from pre-pandemic levels.  These averages were drawn from only 5 sales per quarter during the pandemic, compared to some of the pre-COVID quarters which had more than triple the number of sales.

Avison Young’s Q2 2021 Manhattan Office Insight Report shows that although the 2Q21 availability rate of 19.2% represents a post-2000 high and net effective rents have dropped 10.8% from April 2020 to June 2021, we have already seen signs of stabilizing since March 2021, signaling that demand for office space has incrementally risen.  There has no doubt been a flight to quality with 82.8% of the leasing activity happening at Trophy and Class A properties compared to a combined 72% pre-pandemic level. Additionally, 1.5 million square feet of sublet space has already come off the market as companies rethink their plans.

Buyers should look to invest in boutique offices in the most sought out neighborhoods, especially in walking distance from good transportation. Opportunities will no doubt arise from owners who are facing high vacancy and are unable to refinance at their current levels.

It should be noted that the current dearth of land sales will create a supply shortage in future years, although buyers without ground-up development experience should be wary due to the inherent risks of these projects. The residential market has also rebounded which signals demand for new product.

The luxury home market has had record months for contract signings as of late. In the second quarter, Manhattan apartment closings surged 152% from a year earlier, the biggest annual increase in data going back to 1990, according to a Miller Samuel report.  The report also said that the momentum is continuing as the number of contracts signed in the quarter soared 619% year-over-year to a record 4,633 transactions. Demand is likely to continue as foreign buyers, largely absent for over a year, eventually return.

Meanwhile, the listing inventory of available units for rent dropped 38% in June from the previous month to 11,853, according to Miller Samuel and brokerage Douglas Elliman Real Estate. While still elevated from pre-pandemic levels, the inventory has been reduced by more than half since January.