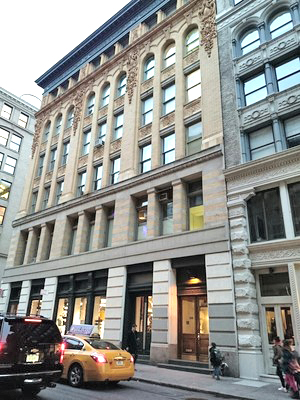 Retail focused investment firm, 60 Guilders, has partnered with the Carlyle Group to purchase a Soho retail condo for $105 million.

Law firm Cole Schotz represented 60 Guilders in its purchase of the 106 Spring retail co-op unit, directly from the co-op.

The fast-growing 60 Guilders firm is led by former Savanna employees Kevin Chisholm and Bastien Broda. Over the past two years, the company has bought an interest in, or is under contract on six SoHo deals.
According to the Real Deal, the company also has its eye on a neighboring retail space at 93 Mercer Street, which is on the market for north of $40 million.

106 Spring Street offers 12,000 s/f of vacant retail space, previously occupied by Burton Snowboards. The flagship retail store offered 5,000 s/f of selling space and 2,000 s/f of storage space as well as a cold room for customers to try on winter apparel.