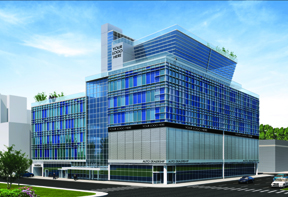 A new office tower is planned for a block front property on the West Side Highway at 51st and 52nd Streets. A partnership led by Jack Guttman and Steve Schwartz is building the nine story 200,000 s/f tower at a cost of $300 million. Featuring waterfront views, it will be built as an office condominium, similar to the Chelsea Arts Tower.

“This is an outstanding midtown location and we found that many companies would rather invest in their own office space rather than be a tenant with constant rent increases,ˮ said Guttman. “The location and design are perfect for companies seeking full floor ownership.”

The building will have 35,000 s/f of ground floor retail and individual floors from 30,000 to 15,000 s/f. All floors will have 15 ft. ceilings, some will have balconies and roof terraces, and there will be underground parking.

With Kenneth Cole, Prada, Mercedes and Porsche on the same street, the area has proven to be attractive to fashion and media companies.

Designed by Kossar and Gary Architects, the design is described as “modern and bold.ˮ Leasing and sales are being handled by Alan Weisman of Lee and Associates.

The project intends to deliver floors the first quarter of 2016.