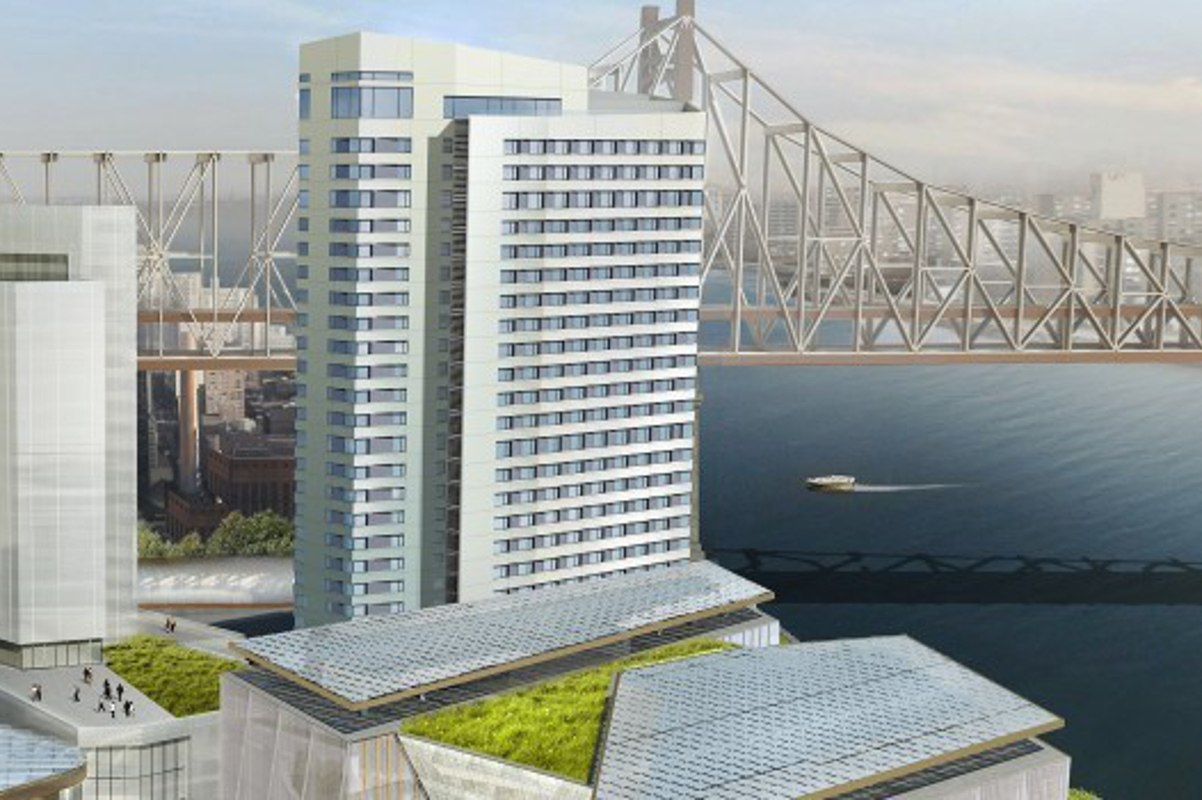 What’s being called the world’s tallest passive house residential building is taking shape on Roosevelt Island as part of the Cornell Tech campus that will usher in a new era for the sleepy enclave.

The team behind the 26-story tower led a tour of the under-construction building on Tuesday for the first time, and discussed the painstaking design and features of the building, which is being built to passive house standards.

Passive House is a strict international standard that cuts energy consumption by 70 to 90 percent while creating a healthier living environment for a fraction of the usual energy costs.

Once the building is completed next summer, a third-party consultant will inspect the building and using specific tests, will verify that it is up to passive house standards.

Once certified, the residential tower will be the tallest and largest passive house building in the world, according to Related’s Luke Falk, vice president of sustainability for the development firm.

“New York City is home to big, dense, tall buildings, and if you can figure out how (to build passive house) right here, it can serve as a template for other developers and the city moving forward,” said Falk.

Developed by the Hudson Companies, the 270-foot tower will house around 350 residents, and was also planned by a team including Monadnock Construction, which built the micro-unit building in Kips Bay, Handel Architects, Steven Winter Associates, Buro Happold and Related Companies. It is part of a 12-acre campus that will also include Forest City Ratner Companies’ building, The Bridge, a cutting-edge office tower designed by WEISS/MANFREDI. Cornell Tech will lease one third of the seven-story building, and the remaining 200,000 s/f will house the mix of startups and established companies, with devoted flexible spaces and common areas built to encourage interactions and collaborations.

One year ago, a slew of city officials, developers, and Cornell executives gathered at the Cornell Tech campus site to hold an official groundbreaking for the $2 billion project that will bring state-of-the-art education and technology to a city with a fast-growing tech scene.

“We knew all along…if we could connect the tech sector to everything else in New York City, we could have an unbeatable hand to play,” said Mayor Bill de Blasio at the time, citing a tech ‘ecosystem’ that has connected the tech sector to finance, fashion, and the manufacturing industry. “It’s growing so organically and powerfully.”

The Cornell Tech campus, a partnership of Cornell University and Technion-Israel Institute of Technology, will offer graduate degrees in applied sciences and technology. The campus will house 2,000 students and hundreds of faculty and staff once completed.

The first phase of the energy-efficient complex is expected to open in the summer of 2017, which includes the passive house residential building.