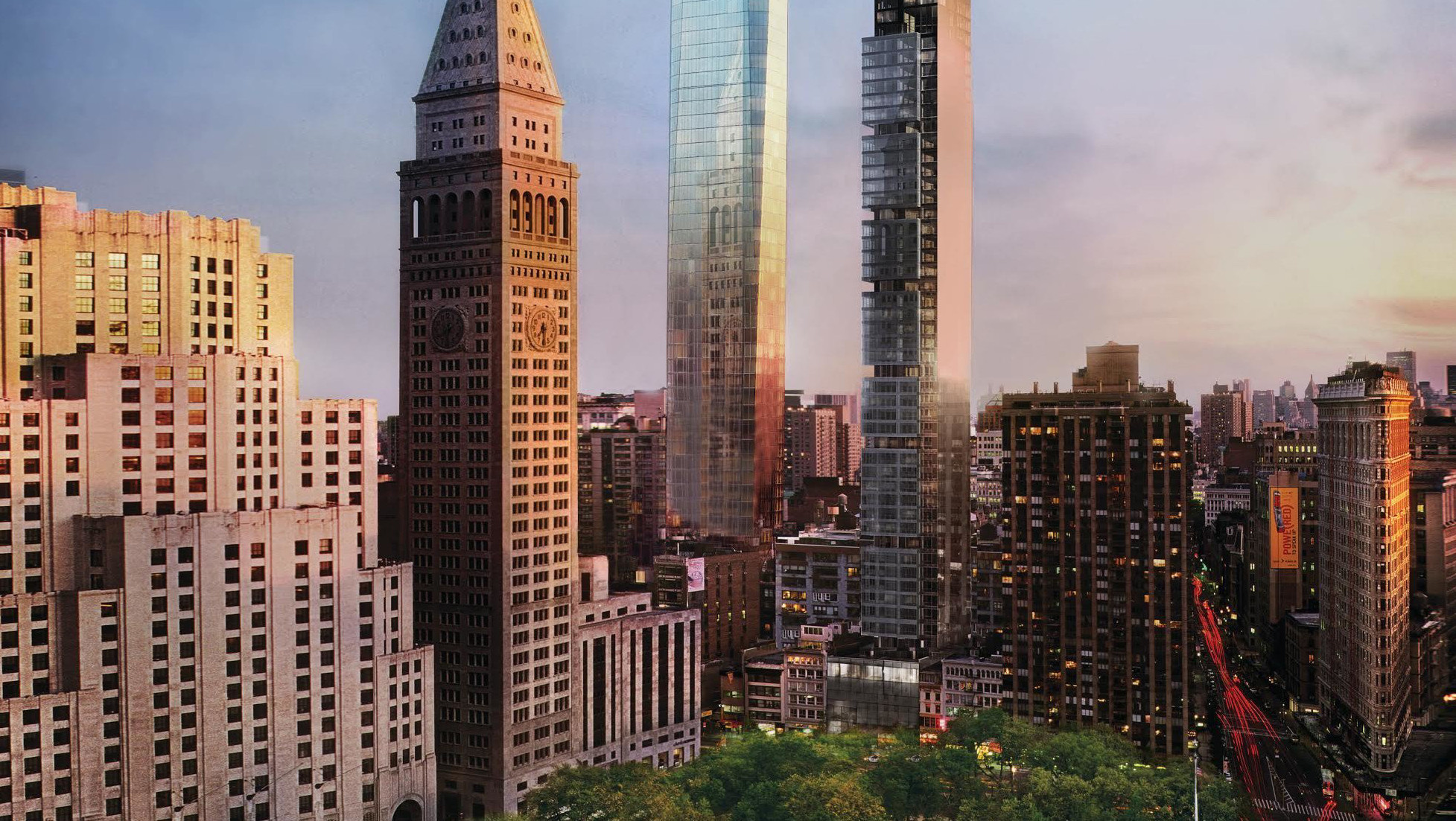 With 800 new units on the way, could the Flatiron District lose its classified status?

Itʼs not every day you spot one of the most powerful men in the free world strolling around a New York park with his pooches and a grandkid in tow.

But nary an eyebrow was raised last week when former president Bill Clinton took in the summer ambiance of Madison Square Park with son-on-law Marc Mezvinsky, grandaughter Charlotte, and dogs Tally and Maisie.

Over the years, the neighborhood has held a variety of names, none of which have made it onto the map of the paparazzi.

Not even the cityʼs 54 million tourists have worn a path to the Flatiron District, preferring to hop off then back on their big red bus after snapping the famous building that gave the area its most recent moniker.

In fact, if its Gramercy neighbor to the east has its very own private park, it could be said Flatiron has its own secret park, one that the locals can still enjoy without being asked directions to the Shake Shack.

For years, most of those locals were working in the lofty mid-rise buildings that proliferate the Flatiron District, crafting everything from toys, to books, to works of art. More recently, it has become the heart of the cityʼs Silicon Alley. 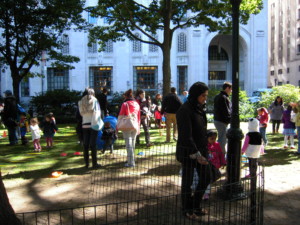 But after years in the shadow of the Worldʼs Most Famous Office Building on 34th Street, the Flatiron District has become a target for some very selective homebuyers — and prospective residents have a wealth of new options for shelter.

According to a recent report from the Flatiron Partnership, there are 800 units of housing planned or under construction in the area.

The bulk of the total comes from Friedland Properties’ 7 West 21st Street rental tower. The building, which is still under construction, will create nearly 300 units of housing in the neighborhood, 58 of which will be affordable apartments. The property is scheduled for completion by winter of next year.

According to Steven Giles, a broker with Douglas Elliman, the Flatiron’s new residents are complex buyers with incongruous preferences.

“I feel like buyers today are getting more and more sophisticated and Flatiron is a traditional neighborhood in the sense that you have a lot of raw, large loft spaces. And I think that has been maintained to this day,” he said.

“What’s interesting, is the Flatiron is now a destination for people who are seeking the exact opposite of that, which is large, ground-up new developments where you have floor-to-ceiling glass windows,” he said.

The neighborhood’s appeal to residents has a always been a minor subtext in its reputation.

It was once known as the Toy District because of the proliferation of toy manufacturers in the area. Ironically, part of the massive former International Toy Center on the western edge of Madison Square Park is now a luxury condo, developed by the Witkoff Group and renamed 10 Madison Square West.

The former 16-story Toy Building North, was converted to 125 condos that have sold at an average of $7.3 million a pop, according to StreetEasy.

Developer Steve Witkoff Group told the New York Times when he bought the property in 2011 that he originally planned to reposition the building and market office space to the burgeoning tech-sector. However, when he saw its birdʼs eye views of the Flatiron Building, the golden-roofed New York Life Building and the Madison Clock Tower, it was clear condos were the way to go.

To the north of the park, The Grand Madison, was originally the Brunswick Building, and served as a hotel, a warehouse, and sales showrooms for gift wholesalers, earning it the title Gift Building before it was converted to luxury apartments in 2006.

One Madison stands guard at the southern entrance of the park.
After a tumultuous start, the high-rise found its footing after being taken over by a consortium led by Related Companies and ultimately became home to such celebrities as NFL quarterback Tom Brady and his supermodel wife Gisele Bündchen, and publisher Rupert Murdoch who bought a $57 million triplex in the tower that was built on the site of a long-shuttered fast food joint.

Behind One Madison, on 22nd Street between 5th Avenue and Madison, developer Bruce Eichner’s Continuum Company reportedly sold half of its 45 East 22nd Street before it was even half-way built.

The 65-story condo topped out at 600 ft. in May, making it the tallest building in the Flatiron District, a name the neighborhood adopted in the mid 80s after a brief stint as the Photo District when the cheap rents and big, airy spaces drew photographers and associated businesses to the area.

In something of a paradox, the late film processing pioneer Baldev Duggal became a technological innovator as he built his Duggal Visual Solutions company serving the world’s leading image-makers on 23rd Street ahead of the new-tech revolution that has since embraced the neighborhood.

The neighborhood’s schtick is now in danger of an update due to an influx of fitness centers. Currently, there are more than 50 gyms in the neighborhood. The most recent arrival is gym chain Equinox, which signed a 20-year, 44,458 s/f lease at 315 Park Avenue South last January. This puts the company in direct competition with other fitness centers such as New York Sports Club, 24 Hour Fitness and New York Health and Racquet Club. The neighborhood also contains a variety of boutique studios such as Yoga Shanti, Kinespirit and Bikram Yoga NYC.

It is also becoming a hub for interior design shops. According to the Flatiron Partnership report, Broadway and its adjacent streets now contain a variety of home furnishing stores. One of the biggest businesses in the area is Porcelanosa, which recently completed renovations for its headquarters at 200 Fifth Avenue. Furniture brand Ethan Allen is also set to open a showroom at 915 Broadway. Other home furnishing shops in the neighborhood include Wolf Home, Madura and Safavieh.

Giles said that the arrival of new businesses has played a role in attracting new residents to the district. “At the end of the day, what buyers are looking for is convenience. And convenience is not having to travel blocks and blocks to get to a place like a gym or grocery store. So you certainly see that while the neighborhood is maintaining a boutique feel, you definitely see the big name gyms and vendors coming through and setting up shop in the neighborhood,” he said.

However, there is a cap on how extensive the migration of new residents to the neighborhood can be. According to Mike Slattery, the Real Estate Board of New York’s VP for research, a wealth of regulatory obstacles will ensure that residential buildings will remain a small portion of the Flatiron’s real estate configuration.

“Also, the snapshot shows you how much of the district is designated as a historic district, which is not insignificant. There’s also a large swath that’s still designated for manufacturing and others which have a preservation requirement. Those regulations don’t lend themselves to a lot of new development going on,” he said, referring to his presentation during the Flatiron Partnership’s annual meeting in June.

“Will residential increase as a percentage of usage in the district? Probably. (But) commercial’s not going to drop very significantly,” he said.

Giles, who is currently handling listings at 50 West 29th Street and 16 West 19th Street, agreed with Slattery, saying that the process has already started.

“I think you will see a steady increase of residential development and you’re already seeing that to a certain extent where old buildings are being torn down in favor of ground-up new development. Given how hot the neighborhood is, I foresee the trend continuing,” he said.

While the neighborhood’s population may swell, there are signs that its appeal remains weak compared to other New York City neighborhoods. According to Giles, this is the reason why he doesn’t expect many foreign buyers to move into the neighborhood soon.
“My feeling is that you have New York-based buyers primarily looking in the neighborhood. A lot of international buyers tend to stick with the more “traditional” neighborhoods of the city which are the Upper West Side and the Upper East Side,” he said.

“I think a lot of it is based on reputation. They don’t particularly know the Flatiron as a marquee New York City neighborhood. And I really think that’s really shifting, particularly with NoMad. I think people are getting to know the neighborhood a lot better now. It’s not just the Flatiron Building anymore.”

There are likely residents, such as former First Daughter Chelsea Clinton and her husband Marc Mezvinsky, who are hoping the district can hold onto its somewhat classified reputation for a while longer, just so the grandparents can enjoy that secret garden just a little bit longer.